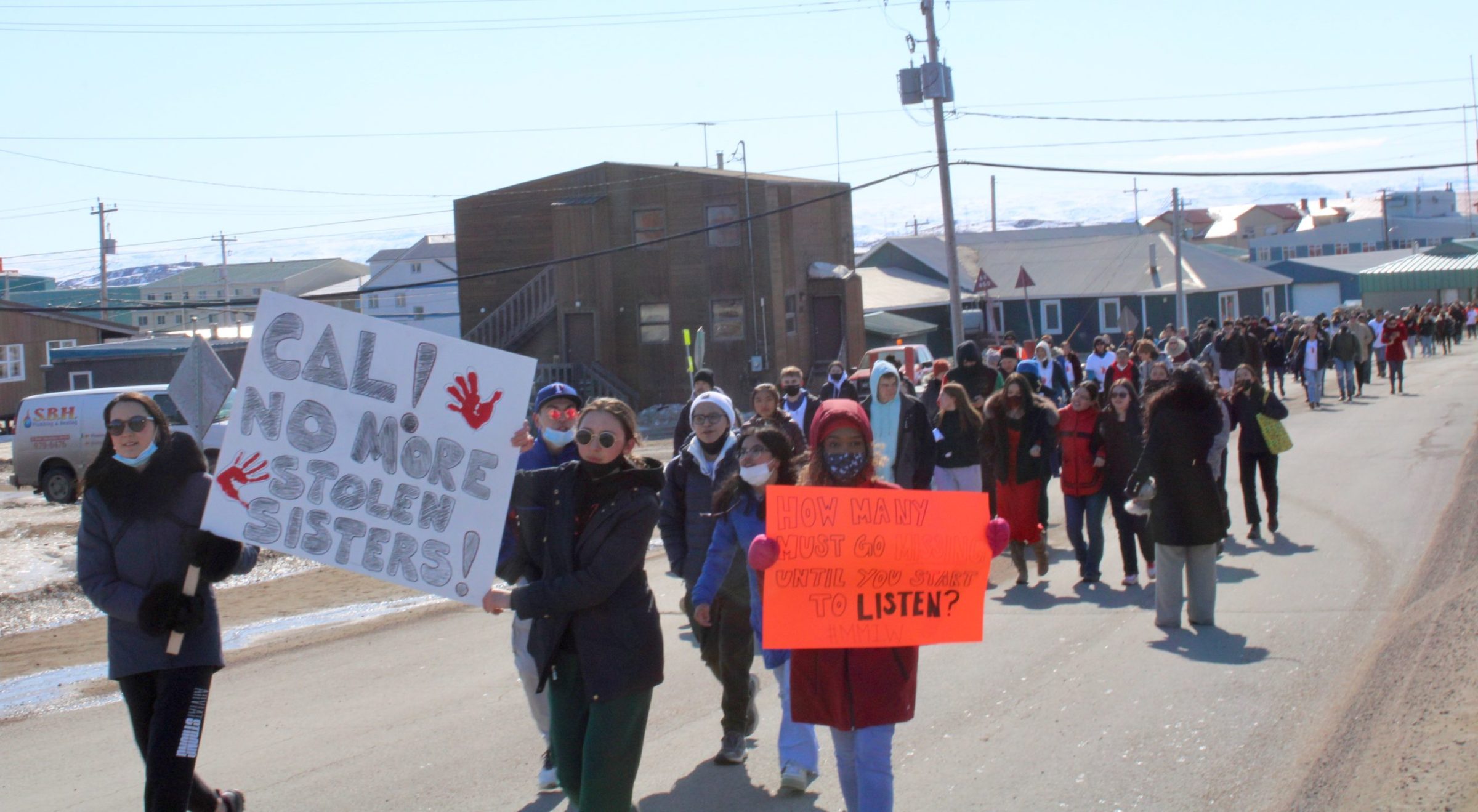 More than 100 people took part in the Red Dress Day march Thursday in Iqaluit, honouring the memory of murdered or missing Indigenous women and girls. (Photo by David Lochead)

Iqaluit’s Red Dress March on Thursday was an event of “happiness but also sadness,” said Jasmine Evic, one of the more than 100 people who took part.

“I’m happy we will be heard and acknowledged, but at the same time it’s sad that we have to do a march for people to know what is happening,” she said.

The marchers, many wearing red, gathered near the Elders Qammaq in Iqaluit on a sunny afternoon to walk to the Nunavut courthouse to honour missing and murdered Indigenous women and girls in Canada.

The march took place as part of the National Awareness Day for Missing and Murdered Indigenous Women and Girls, also known as Red Dress Day.

YWCA Agvik Nunavut member Napatchie Lyta, who organized the march, said it was held to remember the Indigenous women and girls and to “let the families know they are not forgotten.”

From 1980 to 2014, 16 per cent of female homicide victims in Canada were Indigenous women, according to a 2017 report from the federal Justice Department.

In contrast, Indigenous women make up only four per cent of the country’s female population, according to a 2016 Statistics Canada report.

Lyta said it often feels like not enough is being done for the cause of Indigenous women who were murdered or are missing.

So she organized the march to get the community involved.

“I love this turnout,” she said.

“I have goosebumps, to see this many people out here.”

Margaret Nakashuk, the Government of Nunavut minister responsible for the status of women, was one of those who marched.

“It’s important to recognize that Inuit and Aboriginals across the country are provided the right support,” she said.

“We have to ensure each woman and girl is supported without violence.”

After speeches from march organizers and Nakashuk, the crowd started to curl out into the streets.

Among the signs held by people in the crowd were two boards with red dress cutouts pasted onto them. The red dresses were made by school children and organizations supportive of the event, march organizers said. 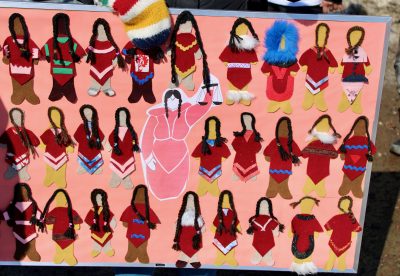 Cutouts of women and girls in red dress are pasted to one of the boards held in the march. (Photo by David Lochead)

As the crowd gathered in front of the courthouse for a concluding round of speeches, Lyta briefly took to the microphone.

“No more stolen sisters!” she yelled.