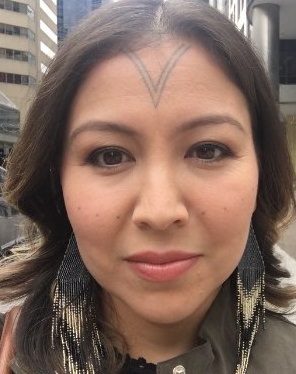 “I stand by Alethea”: Male Inuit leaders speak out in support of account of alleged sexual assault

Indspire has suspended its plan to honour Johnny Issaluk with an award next month, following allegations made on social media on Feb. 5 that the Inuk actor, athlete and cultural educator committed sexual assault.

Nunavut filmmaker Alethea Arnaquq-Baril posted on social media on Wednesday afternoon that she has written to Indspire, as well as the governor general—Issaluk received the Order of Canada in 2019—to share her allegations and ask them to retract their awards to him.

Nunatsiaq News has been unable to verify any of Arnaquq-Baril’s allegations. 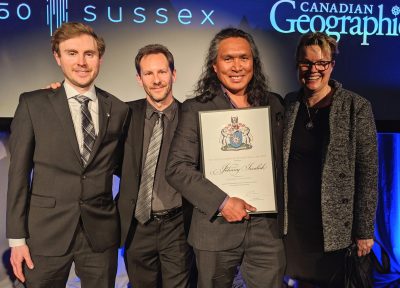 Issaluk, 46, appeared in one of Arnaquq-Baril’s short films, Inuit High Kick, about a decade ago. But she wrote that she later came to regret giving him a platform.

“A few years after making that film, I happened to see him at a party at a friend’s house. While there, he grabbed/fondled my ass. There was zero flirtation beforehand, I was completely shocked by what he did. It was unexpected and uninvited,” she wrote on Twitter.

“I immediately yelled at him in front of whoever else was in the room, telling him it’s not cool to touch women without their permission and without any warning. He apologized profusely immediately on the spot.

“I loudly told him to never touch me again, and to never touch other women without their permission ever again. He said yes, and apologized again a number of times. I decided to forgive him since he apologized, and I believe in second chances.”

“However, what happened next was unexpected. Because some other people witnessed me yelling at him, they came to me and told me their stories.”

Nunatsiaq News has made several attempts to reach Issaluk for comment.

Late in the afternoon of Feb. 7, Issaluk responded to Nunatsiaq News with an emailed letter of apology.

“There are no words to express my grief and regret for the pain I have caused. To those I have harmed by my actions: I am truly, truly sorry,” the letter said.

He also said he did not intend to hurt anyone but “by healing from my own trauma, I have hurt others.”

And he said that he is now seeking treatment for alcoholism, saying alcoholism is no excuse but made his behaviour worse.

“I want to thank my friends and family for their support and I deeply regret the shame that is now shared with them. I hope I can one day earn your forgiveness,” Issaluk’s letter said. 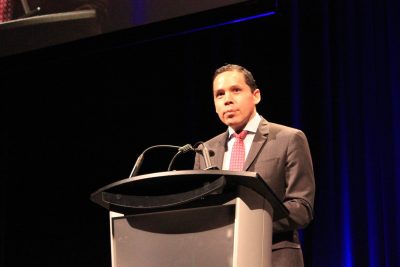 “Alethea Arnaquq-Baril made a social media post tonight about sexual abuse. I want to say that I stand by Alethea. I believe her. And I support her,” Natan Obed, the president of Inuit Tapiriit Kanatami, said on Wednesday night at the Arctic Inspiration Prize ceremony in Ottawa. (Photo by Lisa Gregoire)

Natan Obed, the president of Inuit Tapiriit Kanatami, voiced his support for Arnaquq-Baril on Wednesday night at the Arctic Inspiration Prize ceremony in Ottawa.

“Alethea Arnaquq-Baril made a social media post tonight about sexual abuse. I want to say that I stand by Alethea. I believe her. And I support her,” Obed said in a speech during the awards.

“We need to stand with those people who need our love and our support in times that are very difficult,” Obed said.

It’s rare for an Inuit leader to speak publicly in support of someone who makes allegations of sexual abuse. But Obed said that he just knows what’s in his heart. “I want to be part of a sea change in leadership that shows respect for those who have gone through abuse, and who are courageous enough to come forward and talk about it.”

Obed has spoken out about sexual abuse in the past, especially child sexual abuse. “Leaders need to stand up and say that is enough,” Obed said.

“I am grateful that we have such brave women in our community, who have the courage to speak out. There are many deep-rooted issues in Nunavut which are often swept under the rug. It is important to break the silence in order for our communities to talk more openly about sexual assault, domestic violence and child abuse before we can truly address the situation.”

In a phone interview on Thursday, Lightstone said that it’s important to say you believe a woman when her allegations haven’t been legally proven.

“Far too often when the victim speaks out and shares their story of abuse, it tends to tear the community apart with individuals siding with the victim and the abuser,” Lightstone said.

Lightstone said this contributes to the taboo of speaking out about sexual violence, and that in order to break the taboo, men must support women when they say they’ve been abused.

“Considering the high rates of abuse in our territory, we must change that mentality,” said Lightstone.

Issaluk was set to receive an Indspire award on March 6. A spokesperson for Indspire told Nunatsiaq News in an email that, having learned of the “serious allegations” against Issaluk, the organization had “moved quickly to suspend his 2020 Inspire Award.”

The spokesperson wrote that Issaluk’s original nomination will be reviewed by the Indspire Awards jury.

Indspire awards “represent the highest honour the Indigenous community bestows upon its own people,” the website says.

Issaluk was affiliated with the Royal Canadian Geographical Society as an “explorer-in-residence.” In an email on February 11, a spokesperson for the society wrote that Issaluk resigned from that position last week, after Arnaquq-Baril’s post. The spokesperson wrote that the society takes “all allegations of this nature very seriously.”

A spokesperson from the Governor General’s office wrote in an email late last week that the, “office doesn’t respond to allegations made against recipients of Canadian honours.”

Nunatsiaq News has also asked Alethea Arnaquq-Baril for comment, but has yet to hear back.

— With files from Lisa Gregoire