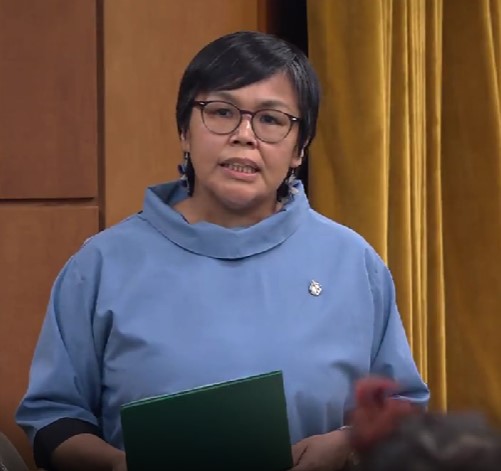 Nuanvut MP Lori Idlout calls for better access to health care for Nunavummiut in the House of Commons Thursday. (Screenshot courtesy of ParlVU)

Nunavut MP Lori Idlout and NDP leader Jagmeet Singh called on the federal government to improve health care services and housing for elders and other seniors in the territory, as well as for those who travel to Ottawa for care.

Following a visit Thursday to Larga Baffin, a full-service boarding home for Inuit who travel to Ottawa for care, Idlout and Singh urged the federal government to work toward three solutions: giving seniors the opportunity to receive care in their own communities, better housing and infrastructure within the territory, and culturally relevant support for seniors who travel to Ottawa for care.

“We know that there’s so much that we can do and the stories that we heard [at Larga Baffin] compel us to use our platform to say the people of Nunavut — particularly elders — deserve better care,” Singh said at an event in Ottawa. “We are calling on the federal government to step up and provide more help, for care for seniors, for housing for seniors, and better conditions here in Ottawa …”

According to Idlout, the Liberal government has committed funding for senior care and housing in its budget, but needs to follow up with significant action.

“What we’re trying to find out is, how can we make sure there is action that will improve services for Nunavummiut?” she said in an interview.

“They only talk about past investments, past millions of dollars that have been sent, but they don’t talk about how these investments are effective, and how they ensure there’s accountability,” Idlout added. “We need to make sure that there are actual improvements with these investments that keep being promised.”

Later in the day, Idlout raised the issue in the House of Commons during question period. Nunavummiut must spend “thousands of dollars and travel great distances” to access basic health care.

“Families are forced to send their loved ones across the country afraid that they will never see them again,” Idlout said.

Liberal Northern Affairs Minister Daniel Vandal pointed to the government’s Arctic and Northern Policy Framework and its recently announced Inuit Nunagat Policy as examples of its commitment to providing better services to people who live in Nunavut and Inuit Nunangat.

“Health care is one of the priorities that’s first on our schedule. We are investing millions in health care in the North and a better partnership with Nunavummiut,” Vandal said.