Kunuk invested into Order of Nunavut 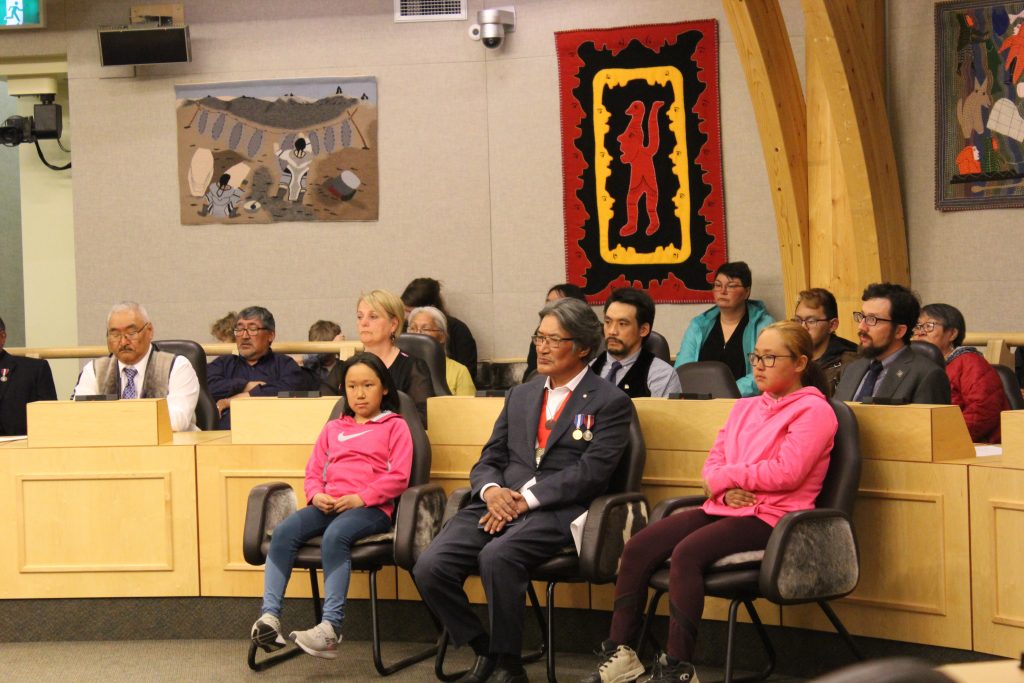 Igloolik filmmaker Zacharias Kunuk sits in Nunavut’s legislative chamber during the June 5 ceremony marking his investiture into the Order of Nunavut. (Photo by Emma Tranter)

He offered that message yesterday evening, after his investiture into the Order of Nunavut. 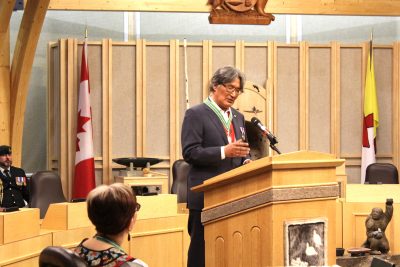 Nunavut needs improved access to high-speed internet, says Zacharias Kunuk, speaking shortly after his investiture into the Order of Nunavut in the Nunavut legislature. (Photo by Emma Tranter)

“Websites and the internet are the future,” Kunuk told those gathered in the legislature’s chamber where he spoke in Inuktitut during a ceremony that was live-streamed on the assembly’s website.

That’s due to constant interruptions resulting from the poor bandwidth.

Kunuk, 61, is best known as the creator of Atanarjuat: The Fast Runner, the first Canadian dramatic feature film produced entirely in Inuktitut.

Atanarjuat was Canada’s top grossing film in 2002, when it was released. In 2015, a poll of filmmakers and critics from the Toronto International Film Festival named it the greatest Canadian film of all time.

One of Kunuk’s many other projects includes the online radio and broadcast station, Isuma TV, but with slow internet in many communities, some can’t even watch his films, he said.

Atanarjuat and Kunuk’s iconic 1995 series, Nunavut, are among the many films that can be accessed there.

Kunuk said that he would like to see more Inuit-language television and film production in the territory.

“Our government should want this. It’s possible,” Kunuk told the audience at the investiture ceremony, which included the Nunavut government’s elected leaders.

Kunuk also spoke about his early talks with elders, who shared their knowledge about traditional ayaya songs and oral stories.

“Those elders that I had a meeting with are all gone, but they were passionate about showing their culture and language,” he said, hesitating and touching his hand to his forehead as he said the word gone, “nunguttut.”

Kunuk got started in film in the late 1980s—by recording elders on a hand-held videocam.

“I didn’t think that when I videotaped something, five years [later], they’re dead and you still see their image talking. That’s when I got it—that it’s very important to record them now, because what they’re saying is going to become important years down the road,” Kunuk said during a 1997 interview. 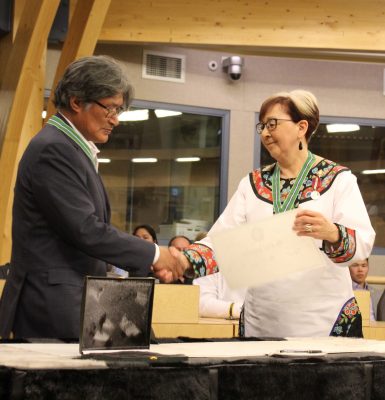 Nunavut Commissioner Nellie Kusugak shakes hands with Zacharias Kunuk during his investiture into the Order of Nunavut. (Photo by Emma Tranter)

More than 20 years later, Kunuk is still focused on preserving and sharing Inuit language and culture through his films.

“We have to make sure the people of Nunavut are informed,” he said. “We have to find out what the Inuit are thinking.”

Kunuk’s upcoming projects include filming a walrus hunt near the northern coast of Baffin Island and possibly a film on residential schools.

The investiture ceremony included a performance of drumming and singing by the Inukshuk High School choir.

A screened video montage showed a retrospective of Kunuk’s work over the past 30 years, which includes eight films and many other works.

Kunuk’s first real film production in 1988 was Qaggiq, a film about a drum dance celebration in a big igloo.

Most recently, there was Silakut: Live From the Floe Edge, which was selected to represent Canada at La Biennale di Venezia 2019, the 58th edition of the Italian exhibition. This saw Kunuk and others broadcasting live from Igloolik to Venice.

Then, after the viewing of Kunuk’s work, Nunavut’s commissioner, Nellie Kusugak, hung the Order of Nunavut medal around his neck and gave Kunuk a certificate attesting that he is a member of the order.

The Order of Nunavut is the territory’s highest honour. Established in 2010, it is handed out each year to individuals who have made an exceptional contribution to Nunavut’s cultural, social or economic well-being. Kunuk was selected for his “creative vision [which] has brought Inuit culture and language to a global audience.” 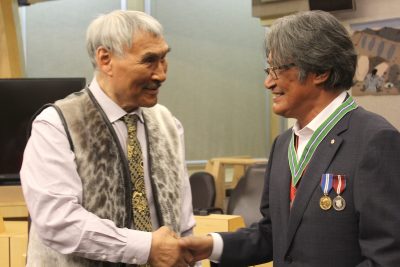 Emiliano Qirngnuq, MLA for Netsilik, shakes hands with Zacharias Kunuk after his investiture into the Order of Nunavut. (Photo by Emma Tranter)

It’s not Kunuk’s first recognition: he was also named an Officer of the Order of Canada in 2015 and in 2017 a member of the Academy of Motion Picture Arts and Sciences.