“We haven’t had much luck with the natural ones” 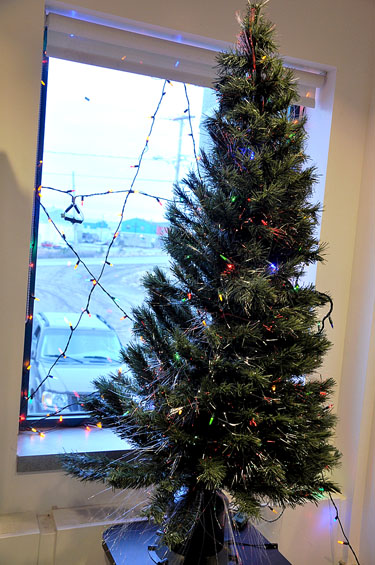 An artificial tree lights up the lobby of the Nunavik regional board of health and social services in Kuujjuaq in Dec. 2010. (PHOTO BY SARAH ROGERS)

For some, Christmas would lose its lustre without twinkling lights draped around a big tree in the front window.

While that tradition has taken root in the Arctic, the mighty evergreens that are so popular over the holidays have not.

So do Christmas trees have a home in the north?

In the 11 years Matt Gee has been manager of Gjoa Haven’s Northern Store, he admits “we haven’t had much luck with the natural ones.”

He tried selling real Christmas trees about six years ago, but the longer lifespan of an artificial tree for about the same price — both sell for about $100 — has made the fake tree a better seller.

Gee’s store usually stocks a few dozen artificial trees every year, from the table-top size to six-foot-high pre-lit trees, which range from $40 to $200.

But there’s no guarantee they’ll sell them all in any given season.

“It changes from year to year, and that’s the challenge,” he said. “If someone bought their tree and decorations last year, they won’t need anything the following year.”

Iqaluit does a little better as far as real trees go. The Northern Store there sells the real deal in a couple different sizes for around $100 a piece.

Arctic Ventures has bought its trees directly for the past five years from a tree farm in southern Quebec, who deliver the trees to First Air to ship north.

The trees vary from six to eight feet in height and sell for about $95, says store owner Kenn Harper.

“We order 50 a year and generally sell them all,” Harper said. “Everyone buys them – Inuit and non-Inuit.”

As good as they smell, Christmas trees aren’t particularly edible or useful, so there are no air freight subsidies for them under the north’s food mail program.

In Nunavik, though, Air Inuit has run a program for the last few years that ships affordable trees anywhere in the region.

“We offer trees for $25, all inclusive,” says Air Inuit spokesperson Christian Busch. “But you have to order them in advance.”

Busch says the airline receives about 200 orders for trees through the program every year.

Co-op stores through Nunavik stock artificial trees over the holidays; the co-op in Kangiqsujuaq says it’s sold 10 so far this year.

But of course, the old tradition of heading out into the woods with a sled and a saw to pick your own tree is not entirely lost in Nunavik.

A handful of communities dip just far enough below the tree line so that trees are only a snowmobile ride away.

“A lot of people take advantage of the (Air Inuit) subsidy because they enjoy a fancy, full-bodied tree,” said Kuujjuaq mayor Paul Parsons.

“But a lot of people still do it the old-fashioned way. They make an outing of it and go out and hunt for that special tree,” he said. “It’s a family event.”