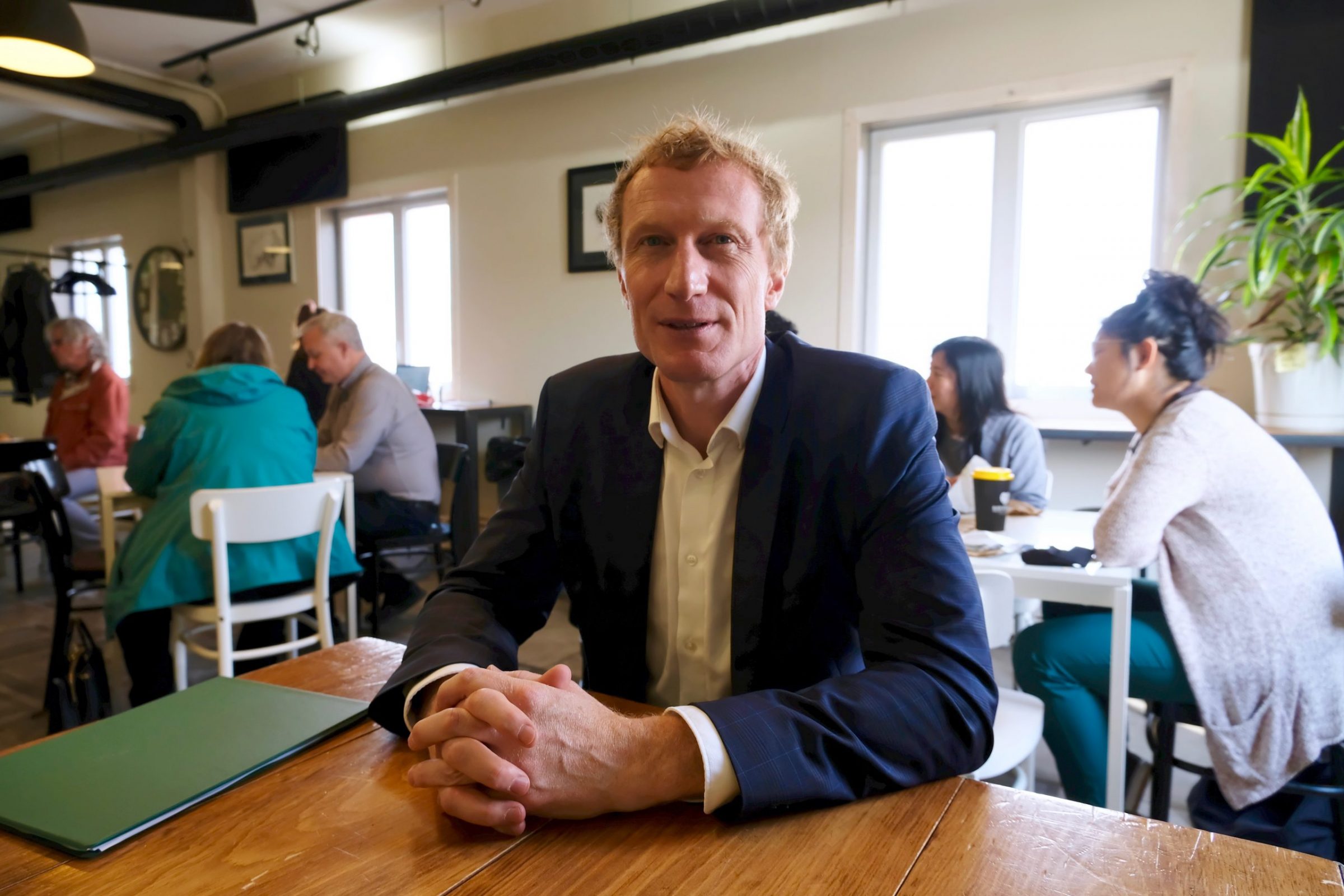 Marc Miller, Canada’s minister of Indigenous services, spent Thursday and Friday in Iqaluit before heading off to British Columbia. (Photo by Mélanie Ritchot)

In a first visit to Nunavut in his time as Canada’s minister of Indigenous services, Marc Miller spent two days in Iqaluit meeting with local organizations, sightseeing and making an announcement on shelters for women and children fleeing domestic violence.

After flying into town on Thursday, Miller met with staff at the Uquutaq Society’s men’s shelter, visited the museum and took a trip out to Qaummaarviit Territorial Park by boat.

Miller grabbed a double long espresso and sat down at Black Heart Café to tell Nunatsiaq News what his job has been like amid a global pandemic, coupled with reconciliation issues pushed to the forefront in recent months.

Nunatsiaq News: Where did you grow up and how did you get to be minister of Indigenous services?

Miller: I grew up in Montreal. I didn’t know if I was going to go into politics, but I did my undergrad at the University of Montreal, then did a master’s in international relations before going to law school. My wife got a job with the United Nations in New York City, so I got a job at a law firm in the U.S., we had two kids, then came back [to Canada] in 2008.

Then Justin Trudeau was getting into politics and I was supporting him. We met in school and have been friends ever since, and obviously, have developed a professional relationship. When he became [Liberal] leader I threw my hat in the ring and haven’t looked back since.

It was really working with minister [Carolyn] Bennett that drew me into Indigenous issues. I started learning [Mohawk] and just got interested and engaged by the issues.

NN: How fluent are you in Mohawk?

Miller: I’m very much a beginner — a level like how Tarzan speaks English. It’s a very rich language in how it expresses ideas, thoughts, ways of being, but it’s really complicated. There are very few speakers so the resources are few and far between — I’m not entitled to all those resources, but I work on it about an hour every day.

NN: How has it been, doing your job during a pandemic when you can’t travel or engage with the Indigenous communities you are working for?

Miller: The job is about relationships, but being able to stick in a chair in Ottawa was needed for emergency response, plus setting the example [of not travelling].

My number 1 job has been to keep people alive and safe. If I told anyone that when I became a minister, they would have said, ‘Get out of here,’ because it would have been the least ambitious thing ever, but it has been the reality of the pandemic.

It’s dealing with the cards dealt in a global pandemic where Indigenous folks are three and a half to five times more susceptible to being hit by COVID, notably through housing challenges, but also inadequate health care in a country that’s supposed to have [equitable] health care.

NN: What has your job been like in the last couple of months with tragic news about unmarked graves at residential schools coming to light and Indigenous rights issues seeing an extra push?

It’s been immensely triggering for anyone Indigenous, especially youth, and a lot of survivors still aren’t ready to speak. There are a lot of unanswered questions, and there’s a continued search for truth for that important closure.

For Canadians who aren’t Indigenous, it’s a realization that there’s a need for compassion and a further understanding. There’s been a lot of public attention on the discoveries, but these were lived reality of survivors, there are intergenerational traumas, and realities that people denied or ignored as a society.

NN: Is there talk at the federal level about supporting searches at residential schools in the North or in Nunavut?

Miller:I did have a discussion yesterday with Aluki [Kotierk, president of Nunavut Tunngavik Inc.] about some experiences of the survivors and the pain they’re going through. There is a continued need for answers.

We have a process for intake of demands, and they vary in nature. They could be requesting money for searches or for mental support. I have not seen a formal request from an Inuit organization, but I wouldn’t want to misspeak, I’d have to check.

Indigenous leadership has to take the forefront [in searches]. As a matter of ethics, you can’t ask the institution that is responsible for the situation to take the lead, but as a reality, we do have the [money] and the expertise to help communities do searches.

NN: Since starting your position in 2019 what are you most proud of getting done for Inuit?

Miller: It’s hard to think about accomplishments because we’re still very much in the middle of a pandemic.… We had to scramble quite quickly to deal with medical transport and make sure money got in for food security — things leadership had been advocating for for so long.

I think we should all be proud of the priority that has been given to Indigenous Peoples for the vaccine and making sure the territory got the first batch of the Moderna. Getting those into arms was key in preventing waves from being here that could have been devastating.

There still is a challenge because of the high youth population in Nunavik and Nunavut and that’s a worry when it comes to the Delta variant [of the COVID-19 virus], but to get that critical mass of second doses in arms, I think has made the difference.

NN: And what has your government failed to deliver for Inuit?

Miller: I think we need to do better on housing. This gap around infrastructure needs to be seen through a health lens.

Also doing much better on health, realizing the impacts of systemic racism on the health-care system and reacting in a nimble and culturally respectful way.

We’re not good as a society at talking about mental health and as a government, probably even less, but we know the problem is there as well.

NN: With some of minister Bennett’s Indigenous ex-staff coming forward claiming her office was a toxic workplace, Nunavut’s MP saying she experienced racism at work, and Jody Wilson-Raybould recently saying Canadian politics are a toxic environment, how can the government work towards reconciliation when these are the experiences of Indigenous women at all levels of the institution?

Miller:I’m a middle-aged white guy, so it’s going to be a little difficult for anyone to believe but I know it is difficult to work as someone who is racialized, or if you’re a woman, is in a male-dominated workplace.

The individual reality of MPs is we’re all equal, but the lived experience of racialized MPs is that, in effect, that is not the case.

In the experience of MP Qaqqaq, it is an environment where she doesn’t feel safe and it is perhaps the most secure building in the country, so that should hit home. There’s a heck of a lot of work to continue to do there.

I won’t speak about minister Bennett. She’s been an inspiration to me. I know she has a number of Indigenous staff and I don’t know those allegations to be accurate.

I just know how much I prize my Indigenous staff. Without them, I probably wouldn’t be in the position I’m in.