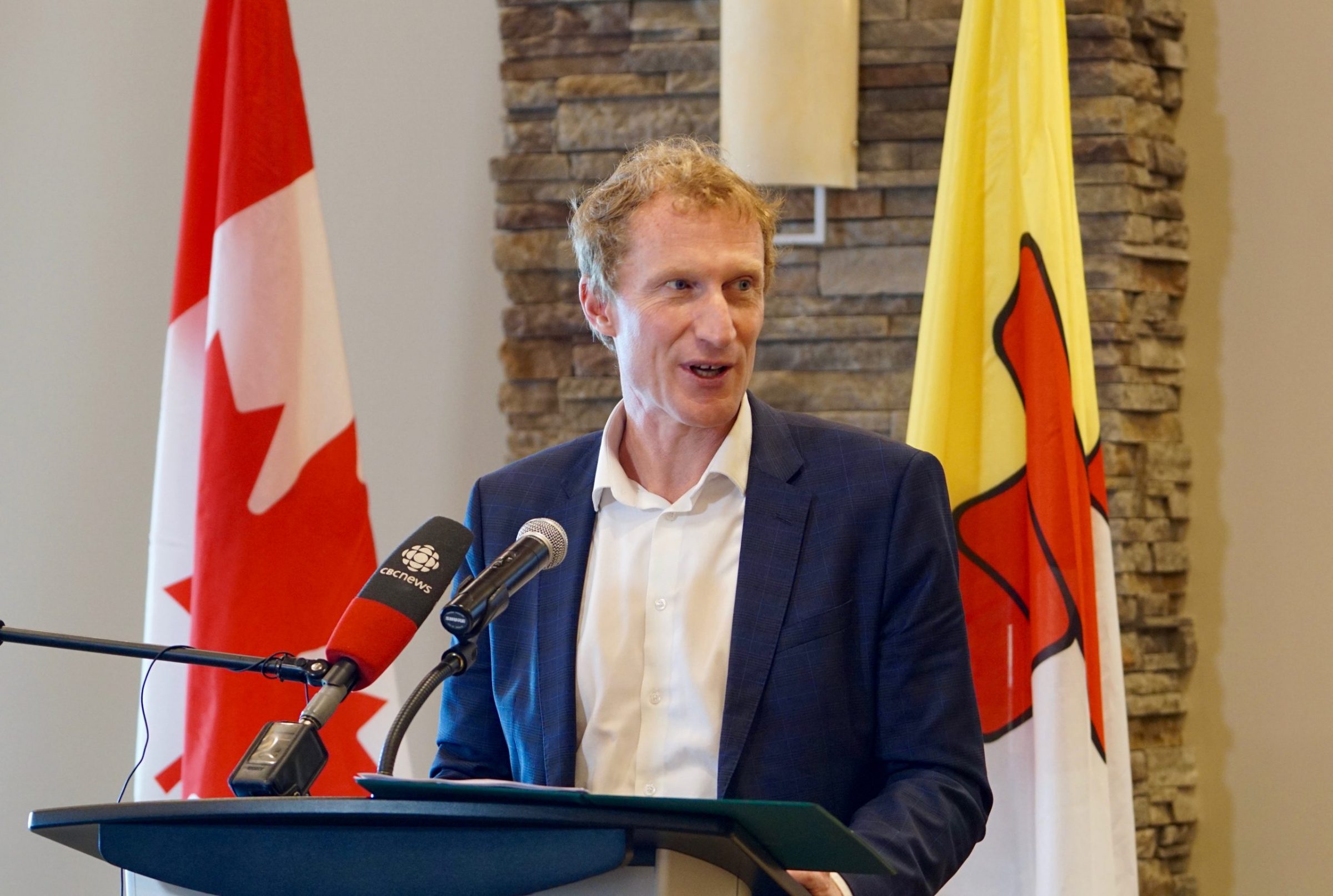 Marc Miller, the minister of Indigenous services, held a news conference at the Frobisher Inn in Iqaluit on Friday. (Photo by Mélanie Ritchot)

This fall, the federal government will open a call for proposals for new Inuit-led shelters and transitional homes, on top of the five already slated to go up across Inuit Nunangat.

For approved proposals, the funds will cover the costs to construct new buildings or renovate existing ones, and the costs of operating the shelters.

Indigenous Services Minister Marc Miller made that announcement on Friday at the Frobisher Inn during a news conference, while highlighting funding that was already announced in April when the federal budget was released.

Aluki Kotierk, the president of Nunavut Tunngavik Inc., was also at the event, while Ahmed Hussen, the minister of families, children and social development, and Rebecca Kudloo, the president of Pauktuutit Inuit Women of Canada, attended virtually.

The new shelters will come from a fund worth $724.1 million set aside to support Indigenous Peoples facing gender based-violence and expand emergency shelters and transitional housing across the country.

Miller said there is no specific portion of the amount dedicated to Inuit, First Nations or Métis-led projects, so there is no cap on how much of it Inuit could access.

“There’s a bit of a pull and push with the needs,” Miller said.

“With the several dozen communities that are rather small [in Inuit Nunangat], the need is there,” he said, adding for Nunavut, there are regional considerations to take into account.

He added the Canadian Mortgage and Housing Corporation has a process to ensure the projects that get approved reflect the needs.

CMHC is in charge of the $420-million portion of the fund that will go towards constructing 38 Indigenous-led shelters and at least 50 Indigenous-led transition homes across the country.

“With the advocacy here today, I fully expect some of that housing to go into Inuit communities,” Miller said.

He said one of the challenges his department encounters when building women’s shelters in Nunavut is the need for anonymity, particularly in small northern communities.

In January the government announced five new shelters will be built for women and children fleeing domestic violence — one in each region of Inuit Nunangat and one in Ottawa.

On Friday, Miller said with the short construction seasons in the North and other challenges, the one in Ottawa will realistically be up and running first.

“Everyone wants to see [the shelters] yesterday, but the announcement in January was key to making sure that [commitment] was there regardless of the government.”

When asked what progress has been made with those plans in the seven-or-so months since the announcement, Pauktuutit’s president Rebecca Kudloo said between the five already approved, the one in Ottawa will probably be built first, considering COVID-related delays.

In terms of a timeline for the new shelters that will be proposed in the fall, they will be worked through to determine where the greatest needs are, then start on those “as soon as possible,” she said.