Inughuit on the Fifth Thule Expedition 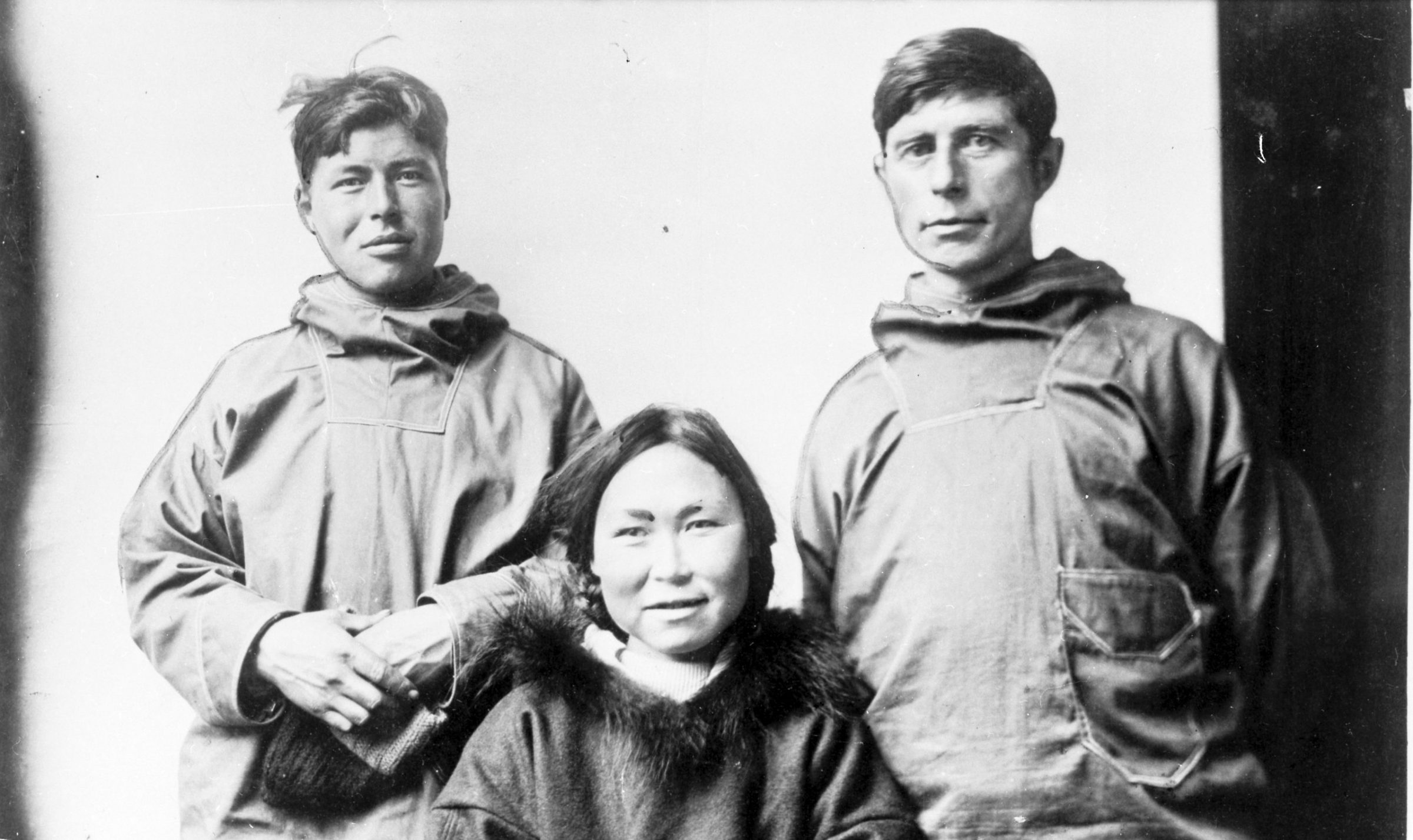 Qaavigarsuaq (left) and Arnarulunnguaq (centre), two Inughuit who accompanied Knud Rasmussen during the Fifth Thule Expedition, are seen with Rasmussen in Alaska in 1924. (Photo by Leo Hansen, courtesy of Arktisk Institut, Denmark, no. 122236)

When Knud Rasmussen with his Danish colleagues embarked on the Fifth Thule Expedition in 1921, he did something quite different from what previous expeditions to the Arctic had done.

Other explorers had usually recruited guides, hunters and seamstresses once they arrived. But Rasmussen brought his own assistants with him: six Inughuit from the Thule District of northwestern Greenland, people Rasmussen knew well, had worked with before and trusted.

These Inughuit, and the Kalaaleq Jacob Olsen, became well-known to the Canadian Inuit in the districts where the Fifth Thule Expedition worked and travelled, particularly the Naujaat and Iglulik areas, but also, depending on where various members travelled, in Pond Inlet and Arctic Bay, in Southampton Island, and in the Chesterfield Inlet and Baker Lake areas.
Who were these people?

The two most well-known, through the writings of Rasmussen and the other scientists, were a young man, Qaavigarsuaq, and a young woman, Arnarulunnguaq.

Moreover, he was unmarried and so would be an excellent choice to accompany Rasmussen on the highlight of his expedition, the long dogsled trip from the Naujaat area across the top of North America to Alaska. He also accompanied Rasmussen to Chesterfield Inlet and to the inland Inuit south of Baker Lake. Handsome and outgoing, he was popular with the Inuit he met everywhere on his journeys. In some of Rasmussen’s writings, he is known as Miteq.

Arnarulunnguaq was Qaavigarsuaq’s cousin. She was born about 1895. Her father died when she was seven, leaving her mother with four children; unable to provide for her daughter, the mother decided to put the little girl to death. But her brother Aajaku pleaded for her life and she was spared. As a young girl growing into adulthood, she learned the skills of sewing and managing a household, and was taken as wife by Iggiannguaq, a skilled young hunter.

Rasmussen recruited the couple for his expedition, but Iggiannguaq died of influenza in Nuuk before the expedition had even left Greenland. Although grieving, Arnarulunnguaq decided to continue with the expedition. Rasmussen described her as “the most skilled of the women we have with us.” He described her role: “It was her duty, as that of the other women, to keep the fur clothing mended, to cook, and, on the journey, to help drive the dogs.” Because she was widowed, it was decided that she too should accompany Rasmussen on the long sled journey, along with Qaavigarsuaq.

The other four Inuit were two married couples. 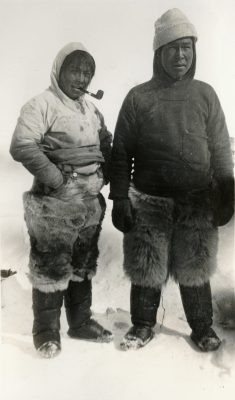 Aaqqioq, the oldest of the Inughuit who accompanied Knud Rasmussen during the Fifth Thule Expedition, is seen here with his wife Arnannguaq while smoking a pipe in Admiralty Inlet in 1924. (Photo by Therkel Mathiassen, courtesy of Arktisk Institut, Denmark, no. 147135)

Aaqqioq was the oldest of the group, having been born about 1891. He had worked for several expeditions in northern Greenland, and had travelled extensively in far northern Canada. Between 1913 and 1917 he had been a guide for Donald MacMillan’s Crocker Land Expedition. He had crossed Ellesmere Island a number of times, as well as sledding the east coast of the island for most of its north-south distance; in 1916 he accompanied MacMillan as far west as King Christian Island. A Canadian RCMP officer described him some years after his return to Greenland, while he was working for yet another expedition, as “a thoroughly capable man” and “a first-class hunter, and an excellent dog driver, and a good and cheerful worker.”

His wife was Arnannguaq, born about 1896. As a teenager in 1911 she had been married for a time to Minik, of whom I wrote in my book Minik, the New York Eskimo. The young couple had lived in the home of Knud Rasmussen and Peter Freuchen at their Thule station. But the marriage failed because Arnannguaq was, although an excellent seamstress, extremely lazy and spent most of her time sleeping. Freuchen described her at the time as the most resourceless girl he had ever met. Later she married a hunter, Ittullak, with whom she had two children, but that marriage too failed. Eventually she married Aaqqioq. In the meantime she must have outgrown her laziness, for Rasmussen chose the couple to accompany his expedition. 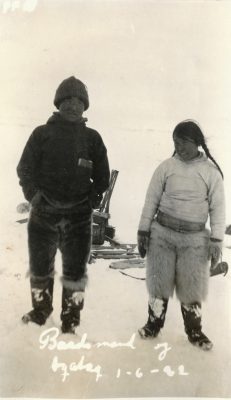 The other couple was a young man, Nasaitsorluarsuk, and his young wife Aqattaq. Nasaitsordluarsuk, as a young man of about 19, had participated in the Second Thule Expedition into farthest northern Greenland, a disastrous venture in which a Swedish botanist, Thorild Wulff, and a Greenlander, Hendrik Olsen, perished. The young guide’s name was a mouthful, and he was usually known in Danish as “Bådsmand” [Boatman] and in English as “The Bosun.” In Inuktun this became Poorsimaat, the name by which he is remembered in Canada. Aqattaq was still a teenager of about 18 when the Fifth Thule Expedition began. This couple became especially well-known to the people of Uluksan camp just outside Arctic Bay where they spent time in 1924 during their return to Greenland via north Baffin Island.

These were the Inughuit who helped to make Rasmussen’s expedition a success.