Inuit culture should be prominent at GG ceremony 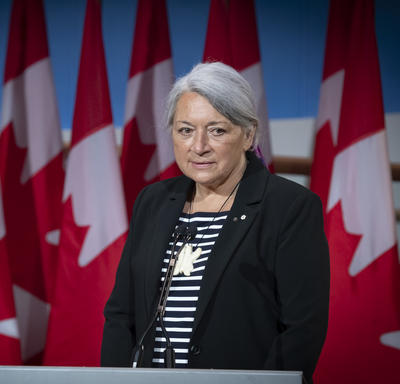 Watch for Mary Simon, who becomes Canada’s first Inuk Governor General on Monday, to quickly put her own stamp on the job.

As the Queen’s representative, it’s an important, but largely symbolic, position in Canada’s government structure.

It’s why Simon will want to get the symbolism right from on Day 1, and why Monday’s installation ceremony in Ottawa will be crucial for setting the right tone.

Governor General installations are usually steeped in royal traditions — a horse-drawn carriage, a military 21-gun salute, the presentation of the Great Seal of Canada, and so on.

When Nunatsiaq News asked its Facebook followers last week how they thought Simon’s swearing-in should look, there were many suggestions that it recognize her culture.

Readers suggested a qulliq lighting, throat singing, and drum dancing (although there was some disagreement about whether the dancers should come from Nunavut or Nunavik, Simon’s home region). Some hope to see participants adorned in traditional clothing. Another said there should be a demonstration of Inuit games.

One reader suggested Nunavut’s homegrown talent, The Jerry Cans, should perform. And another suggested it’s important for her to be surrounded by family and friends on such an auspicious occasion.

For the record, Simon has been on Nunatsiaq News’ radar as a potential GG for more than a decade. In 2010, Nunatsiaq News published an news story about speculation that Simon was being considered then to succeed Michaelle Jean as Governor General.

However it unfolds, Simon’s installation will be scrutinized for the signals it sends about her, the Governor General’s role, and its inclusion of Indigenous Peoples.

From the moment Simon’s appointment was announced on July 6, she has been pegged by Prime Minister Justin Trudeau and national leaders like Inuit Tapiriit Kanatami president Natan Obed as the right pick.

Obed called Simon “an ideal Governor General for this place and time” due to her long federal government career, including a stint as ambassador.

Simon inherits the post at a crucial time for Canada’s reconciliation with Indigenous Peoples. There had already been mounting pressure to live up to the Truth and Reconciliation Commission’s 94 calls to action (now more than five years old). But what many Canadians learned this spring about unmarked graves at former residential schools has shattered what Canadians knew of their country, left them angry, but galvanized in their determination to make reconciliation a reality.

Canada is also emerging from the COVID-19 pandemic that has left millions of us weary and our economy weakened after a year of lockdowns, isolation, and mask-wearing.

Simon will also need to restore public confidence in the role of the Governor General after her predecessor, former astronaut Julie Payette, spectacularly crashed and burned, forced to resign amid allegations of bullying and presiding over a toxic workplace in the country’s highest office.

And Simon will need to counter her critics, who are disappointed she doesn’t speak French — it’s usually a given that governors general perform their duties in both official languages.

At the press conference to announce her appointment, Simon grabbed attention by speaking Inuktitut.

By most accounts, Simon is a smart, bilingual (English and Inuktitut) woman, who should be able to learn another language in short order. While Canadians watch to see how Indigenous culture is represented in Monday’s ceremony, don’t be surprised to hear Simon bravely test out her limited French.

The expectations of Simon are already high before she starts. On Monday, Canadians will start to see how well the first Indigenous Governor General stacks up.