Over 1,000 Inuit in Ontario have received their 1st dose of Pfizer’s COVID-19 vaccine 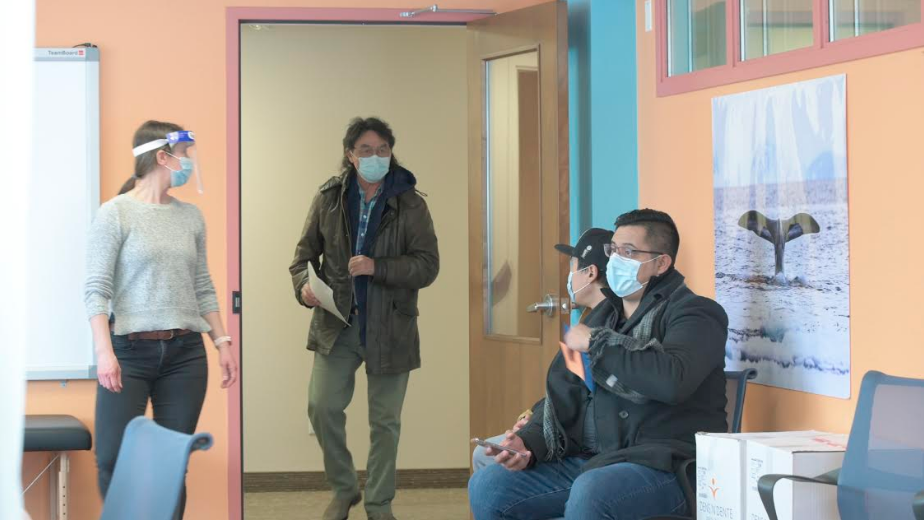 Inuit living in Ontario have been reconnecting with friends and community members they haven’t seen in months months while going to get the COVID-19 vaccine at the Akausivik Inuit family health centre in Ottawa. (Photo provided by Connie Siedule)

Inuit across Ontario are reconnecting with friends and community members they haven’t seen for months in the post-vaccination room of Ottawa’s Inuit health centre.

“It’s been uplifting for many people and has provided that much-needed visit,” said Connie Siedule, the executive director of the Akausivik Inuit Family Health Team in Ottawa.

She talked to Nunatsiaq News after speaking at a meeting on Tuesday hosted by Pauktuutit Inuit Women of Canada, on the organization’s COVID-19 Stay Safe Campaign for Inuit women and families in Inuit Nunangat and Ottawa.

“There’s a bit of relief,” she said of the mood in the waiting room.

“Like, ‘Oh hey we’re still here … we’ve survived so far,’” adding the pandemic has been mentally tough for many, especially with strict health restrictions in Ontario.

Sometimes, it takes a few minutes for people to recognize each other since everyone is wearing masks, she said, but once someone notices a friend, they start catching up and sharing what they’ve been up to during isolation.

The optimism has spread to the nursing team working on the floor where the vaccines are given, said Siedule.

“It’s a very cheerful floor, for those working and those who come in to receive their shot.”

Siedule said she has seen a much higher uptake for the COVID-19 vaccine compared to other vaccines in the past.

Many Inuit are not used to being first in line for things like vaccines, she explained.

“We’re used to having to wait and to fight for years and advocate for decades before anything happens.”

Inuit are considered a priority group to get the COVID-19 vaccine in Ontario because of increased risks from the disease.

Siedule says Inuit experience higher rates of tuberculosis and other respiratory infections compared to the rest of the world.

She also spoke about how Inuit have lower life expectancies compared to the rest of the Canadian population by 10 to 17 years during the meeting.

Siedule said she wants patients to realize “you’re being prioritized for a lot of good reasons and you deserve this vaccine.”

More than 1,000 Inuit in Ontario have received their first dose of the Pfeizer vaccine so far, and that number is expected to grow beyond 1,300 by the end of the week, said Siedule.

The clinic at the Akausivik Inuit family health centre began on Feb. 17.

Siedule said it’s difficult to know how many Inuit are in Ontario and how many are eligible for the vaccine, since census data is lagging behind. She said the numbers in the last census were at least 30 to 40 per cent lower than their own patient records show.

Ottawa has the largest Inuit community in the south. Agencies that serve the community, like Akausivik, estimate the city’s Inuit population is between 3,700 and 6,000, according to the Indigenous Peoples Atlas of Canada.