Inuit living outside Nunavut rally for benefits from Inuit organizations

“Someone, somewhere, sometime ago, made a decision to deny an application based on residence and it became a norm” 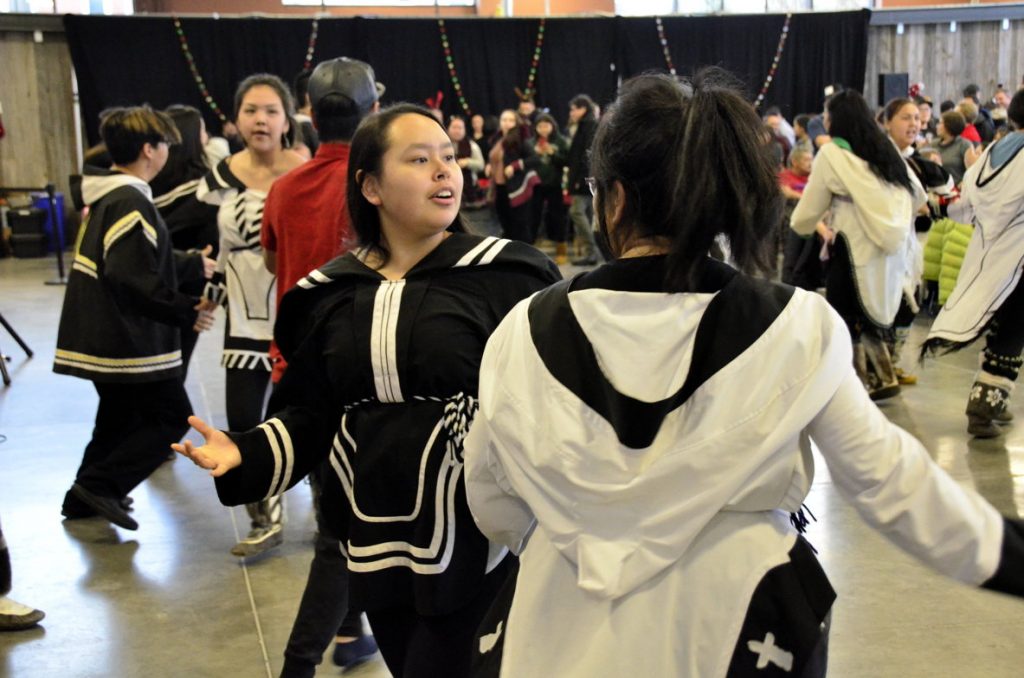 Inuit who live outside Inuit Nunangat have started to lobby for more benefits from their Inuit organizations in Nunavut. Among them are the hundreds of Inuit who attended last year’s Christmas gathering for Inuit in Ottawa, said Manitok Thompson, who is pushing for more recognition and benefits for Nunavut Inuit outside the territory. Here, Nunavut Sivuniksavut students get the fun going at the 2019 Inuit holiday gathering in Ottawa. (File photo)

Nearly 700 Inuit living outside Nunavut have joined together to lobby for more recognition and benefits from their regional Inuit organizations and Nunavut Tunngavik Inc.

“It’s against our human right to be denied benefits given to those inside the territory of Nunavut…. We are tired of being forgotten and denied for funding based on where we live,” says the introduction on their new invitation-only Facebook page called “Inuit beneficiaries living outside Nunavut.”

They cite Article 35 of the Plain Language Guide to the Nunavut Agreement, which says, “A beneficiary of the Agreement does not need to live in the Nunavut Settlement Area.”

More than 150 of these Nunavut Inuit living across Canada, along with other supporters, have signed a petition that’s gone to the Nunavut Inuit organizations asking for access to benefits.

Jonathan Magaknak of Cambridge Bay, who now lives in Halifax, started the petition after he lost his job due to COVID-19 and wanted to tap into the help that others in western Nunavut were receiving from the Kitikmeot Inuit Association.

“We Inuit are still beneficiaries even though we live outside of Nunavut and most people have been laid off from work due to COVID-19 and this would help a lot with basic supplies and food during this time of hardship,” Magaknak said in a comment on the petition, which he shared with Nunatsiaq News.

But this money hasn’t been easy to tap into for Inuit from Nunavut who now live in southern Canada, like Manitok Thompson, a former minister in the Northwest Territories and Nunavut governments, who has lived in the south for nearly 13 years, first in Alberta and now near Montreal.

After she lost contracts due to COVID-19, Thompson, an expert sewer, who originally comes from Coral Harbour in Nunavut’s Kivalliq region, applied to get sealskin from the Kivalliq Inuit Association.

The KIA had set up three new programs aimed at elders and traditional activities from its $4.3-million share of the Indigenous Community Support Fund.

But Thompson’s request was refused by the KIA, and then referred to NTI, and by NTI to the Nunavut government.

Thompson said, “There is no written policy that Nunavut Inuit living outside the territory can’t get support from their regional organizations, but it’s still happening.”

“Someone, somewhere, sometime ago, made a decision to deny an application based on residence and it became a norm. I don’t think there’s a written policy. I am looking for one,” she said.

When the Nunavut Agreement was negotiated, no one thought Inuit would start living down south, she said, but now roughly 18,000 Inuit are living across Canada, outside the Inuit Nunangat.

Although many of these Inuit who live outside the North receive nothing, the Nunavut Inuit organizations are wealthy, receiving, among other things, royalties from mines and land leases, Thompson said.

“They’re not like the government,” she said. “These guys have lots of revenue.”

Thompson finally went back to the KIA, citing the lack of any policy to deprive her of benefits and finally received a cheque.

“You should be commended for knowing your rights,” was the message she received.

But many don’t know those, so Thompson decided to get involved in the Facebook group, so “we can talk about being denied the programs.”

While there are Inuit community organizations for urban Inuit, like Tungasuvinngat Inuit in Ontario, they are mostly geared to providing services for those who need help in the city, she said.

Members of the new Facebook group live across Canada and as far away as Ireland: “Inuit are everywhere,” she said.

Every single one of them is attached to a community, she said. They’ve now been encouraged to reach out to their community representatives and make sure these representatives know where they are and what they need.

Thompson would also like Inuit Tapiriit Kanatami President Natan Obed to step up, because ITK represents all Inuit “each and every one of us, and he meets with the presidents” of the Inuit organizations.

Thompson said that she has still to register to vote in NTI elections.

“At that time they are recognizing us,” said Thompson, adding, “I will always be a beneficiary.”

She and the others on the Facebook page plan to keep raising their rights as beneficiaries.