“The amauti I made, that I dedicated to my late sister, Lily, it was like she was standing on the stage and standing for justice” 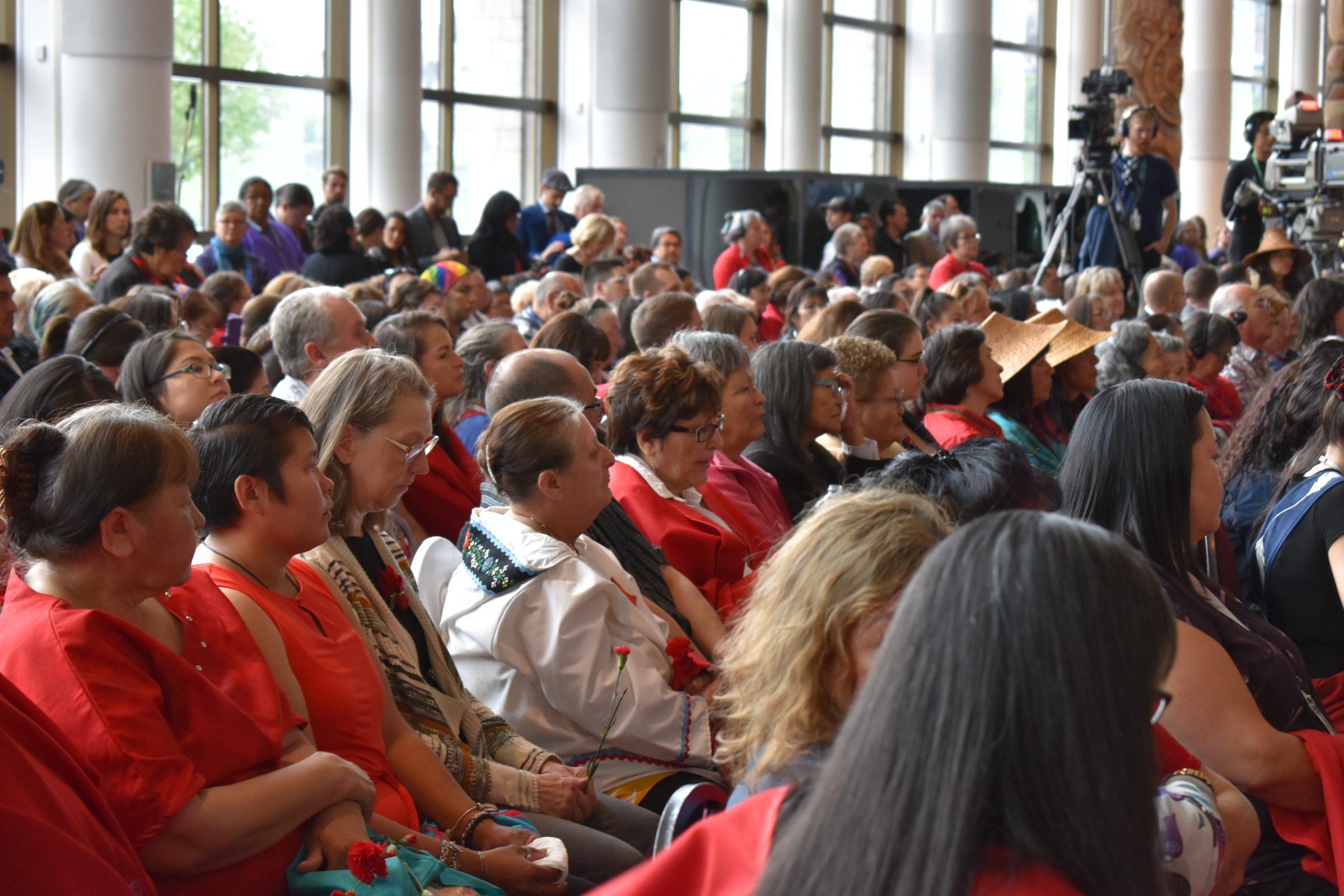 June 3 marked the release of the final report from the National Inquiry into Missing and Murdered Indigenous Women and Girls. Many attendees came dressed in red, and in dress from across Indigenous traditions and communities. (Photo by Kahlan Miron)

When Prime Minister Justin Trudeau received the final report from the National Inquiry into Missing and Murdered Indigenous Women and Girls, he shared the stage with a red amauti.

Created by InukChic’s Martha Kyak, it was one of several examples of how the presence of Inuit was hard to miss at Monday’s closing ceremony at the Canadian Museum of History in Gatineau. 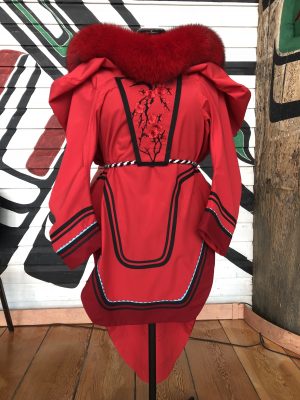 The closing ceremony showcased a red amauti created by InukChic’s Martha Kyak. On Facebook, Kyak wrote: “The amauti I made, that I dedicated to my late sister, Lily, it was like she was standing on the stage and standing for justice.” (Photo by Kahlan Miron)

Like many in attendance who wore red, the amauti was a nod towards the Red Dress project, which aimed to draw attention to the staggering number of missing and murdered Indigenous women and girls.

On Facebook, Kyak wrote: “The amauti I made, that I dedicated to my late sister, Lily, it was like she was standing on the stage and standing for justice.”

A sealskin could also be seen draped from the podium on the stage. And among the various Indigenous ceremonies included in the event, elder Meeka Arnakaq lit a qulliq, staying on stage throughout the event to keep it alight.

That particular qulliq had travelled with the commissioners to the hearings.

“And at each hearing, it was tended by an Inuk woman … who listened, who provided support to the commissioners, and hence it holds all the stories of loved ones,” said Lisa Koperqualuk, who co-hosted the event.

The release of the final report is the culmination of over two years spent gathering difficult stories and discussing the means of change.

Speakers and attendees mourned lost loved ones through speeches, prayer and moments of silence. Pictures of the missing and murdered—carried as posters by those in the crowd, or gathered on tables near the entrance—also served as powerful reminders.

But the day was a recognition of truths, too, and the audience and speakers both made one point clear: that day was not an ending, but one more step towards action. 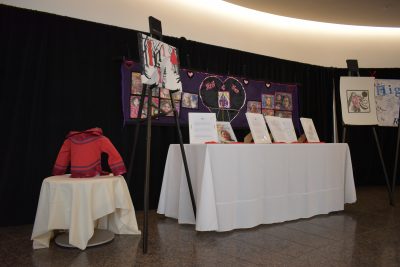 Artworks from the Legacy Archive, which was collected over two years by the National Inquiry, were also present at the Closing Ceremony on June 3. “Each piece stands at a place where one’s truth and experience is revealed, as a tool to fight racism and resist colonial beliefs, and as a platform to raise awareness about Indigenous issues and encourage activism,” states a document from the inquiry. (Photo by Kahlan Miron)

It was a theme emphasized by all four commissioners when they took the stage. The audience’s reaction also spoke volumes: when Prime Minister Justin Trudeau promised the report would “not be placed on a shelf to collect dust,” he was met by loud applause, cheers and drum banging.

In many ways, the ceremony was as much about the future as it was about the past. This was symbolized through the next generation passing the final report to present-day leaders—an act that happened twice.

As part of the tikinaagan (or cradleboard) ceremony, youth presented the report to Trudeau after the four commissioners bundled and touched the report with sacred materials from Inuit, First Nations and Métis peoples, and grandmothers and family members acknowledged the bundle before it was passed on.

“The final report is a gift, to all Canadians and Indigenous nations and peoples in Canada, from all those who share their sacred truth,” explained closing ceremony co-host Valerie Courtois.

“It is presented by youth, from our next generations of leaders, and will be presented to the [prime minister.]” 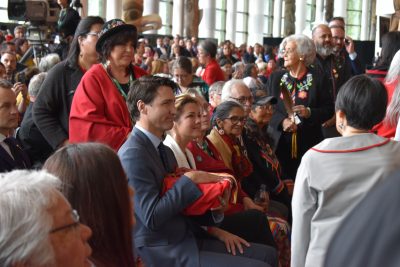 Justin Trudeau receives the final report from the National Inquiry into Missing and Murdered Indigenous Women and Girls. (Photo by Kahlan Miron)

During the tikinaagan ceremony, families of victims and survivors were encouraged to stand—whether they were in the room or watching from home.

Then, youth from each province and territory passed a report to their representative ministers. Nunavut’s Elisapee Sheutiapik took part in this event.

While the closing ceremony was an acknowledgement of Indigenous truths and experiences, another truth needed to be recognized as well.

“This process has tested me to my core,” said commissioner Qajaq Robinson, who was born in Iqaluit and raised in Igloolik. “As a non-Indigenous person, I struggled to come to terms with my role in Canada’s genocide … shame, guilt denial. That urge to say no. No, no, that’s not what this is. This is not who I am. But it’s the truth, it’s our truth, it’s my truth, it’s your truth.” 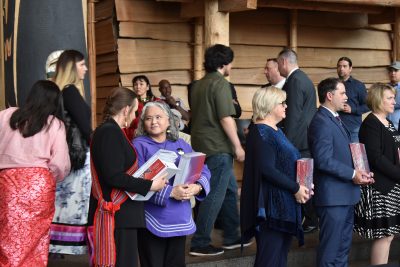 Nunavut’s Elisapee Sheutiapik with the final report. Ministers from each province and territory received copies of the final report from youth from their region. (Photo by Kahlan Miron)

“It might challenge who we think we are, who we hope to be, but who we will be and who we are is ultimately defined by how we respond now that we know.”

Later, Trudeau seemed to echo the sentiment. “This is an uncomfortable day for Canada,” he said. “But it is an essential day.”

As people left they were encouraged to take copies of the report, as well as other tokens, like a red ribbon. Organizers invited attendees to tie the ribbons in public places, to serve as a visual reminder of the missing and murdered.