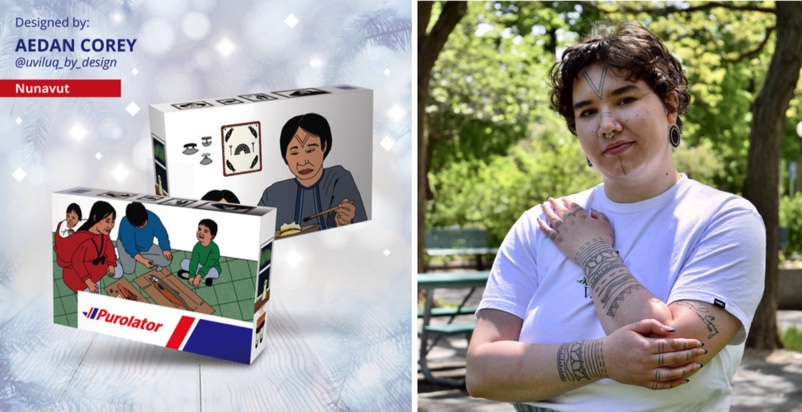 The shipping company hosts an annual campaign to feature works by emerging Canadian artists on its holiday shipping boxes.

This year’s collection spotlights the many ways that families and communities eat, drink and celebrate the winter holidays together, said Purolator spokesperson Courtney Reistetter.

Corey is one of 13 artists featured in this year’s campaign. Artists are typically chosen each year based on recommendations from the previous year’s participants.

The visual artist, writer and tattooist, originally from Cambridge Bay but now lives in Ottawa and uses art to amplify Inuit representation.

The theme for this year’s campaign was about sharing meals and holiday traditions.

“I really wanted to showcase the ways we celebrate the holidays in Nunavut, and what came to mind specifically with the theme was sharing traditional food with family and community members, and lighting the qulliq,” Corey said.

Corey created the image by first drawing a draft based on photographs and personal memories, and then refining the work into a digital drawing that’s now on the holiday box.

It depicts an Inuit family preparing fish and lighting a qulliq seal oil lamp, and highlights Inuit tools like the ulu and clothing like the amauti.

“It was super important to me to highlight the way in which we take part in our own distinct traditions in Nunavut, hence the design featuring the cardboard boxes on the floor with our country foods,” Corey said.

“I wanted to demonstrate the ways in which knowledge and tradition are passed down to future generations, which is why I chose to have the woman lighting the qulliq be accompanied by a child, who is watching and learning through the experience.”

Nunavut artists that have been featured in past holiday box campaigns include Kyra Flaherty and Megan Hunt.

This year, Purolator will also donate $5,000 to the Niqinik Nuatsivik Nunavut Food Bank in Iqaluit.

The holiday boxes are available at Purolator Shipping Centres and Mobile Quick Stop locations.More information about the artists featured in this year’s campaign can be found on the Purolator holiday website.