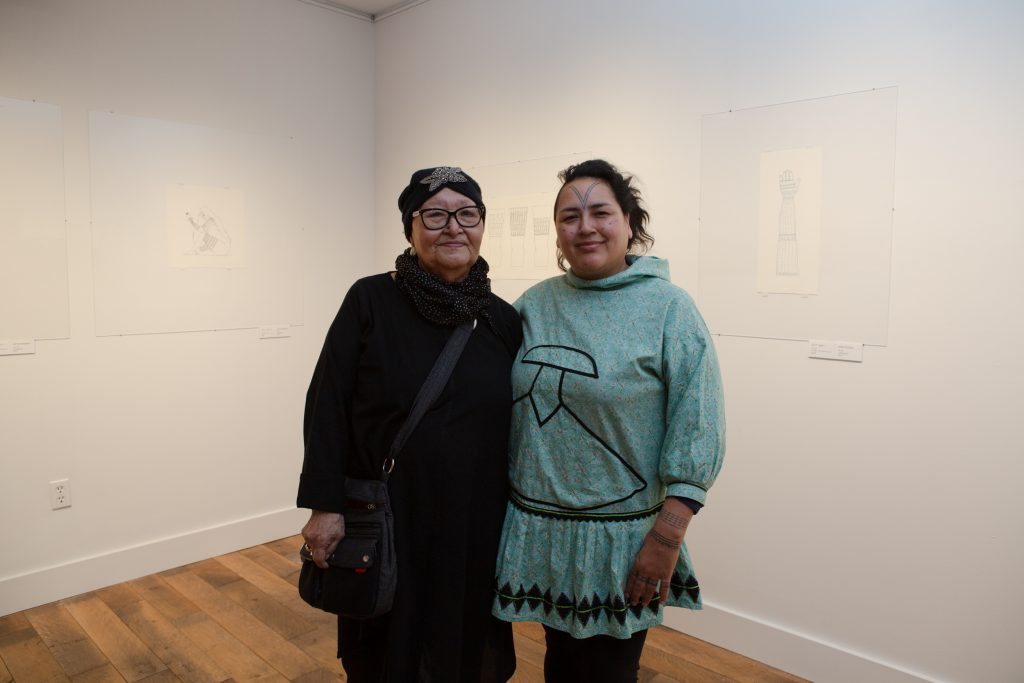 “I am very excited the museum is the first place to show this,” said Jessica Kotierk, the curator of the Nunatta Sunakkutaangit Museum, while her team of two installed the exhibition over the weekend.

“It’s such a great way to highlight that the museum plays a role in supporting different artists who come from Nunavut, who live in Nunavut, that people in Nunavut are interested in seeing. I definitely was very excited to hear that it’s about beauty and women and tattoos, and I think that it is all relevant and up-to-date.” 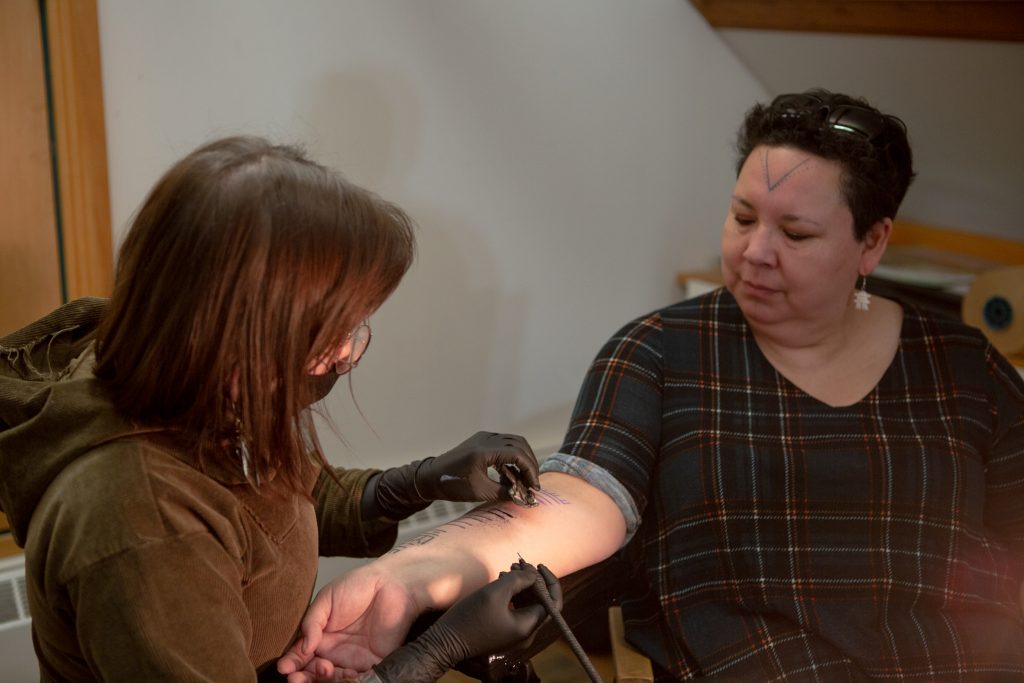 “Traditionally, Inuit women would become the tattoo artist if they were a well-known seamstress. I come from a long line of amazing seamstresses in my family,” Hovak Johnston told the room filled with people as part of the exhibition’s opening remarks.

“It was lost for over a hundred years, no one was practising it anymore. I made this long list of why we were afraid, why there was so much fear of tattooing, so much shame. A lot of it had to do with Christianity and residential schools. A lot of fear has been put onto Inuit.”

Germaine Arnaktauyok has been a resident of Yellowknife for the past 30 years, but was born and raised in a seasonal camp outside Igloolik. Arnaktauyok has been creating art since the late 1950s, a time when colonial resettlement projects took place to further assimilate Inuit into southern Canadian culture. Inuit traditions were shamed, such as women’s tattoos and Inuit family names.

Johnston shared that although her recent book, Reawakening Our Ancestors’ Lines: Revitalizing Inuit Traditional Tattooing, was authored under the name Angela Hovak Johnston, she has recently legally removed her Christian name, which was the name of a minister’s daughter.

“I have a deeper connection to Hovak, which was given to me before birth. Hovak is a very ancient name.”

Germaine Arnaktauyok also made a name change. For the first time, she signed her artwork with what she considers to be the traditional spelling of her name, Germaine Arnattaujuq, in yet another act of Inuit reclamation. 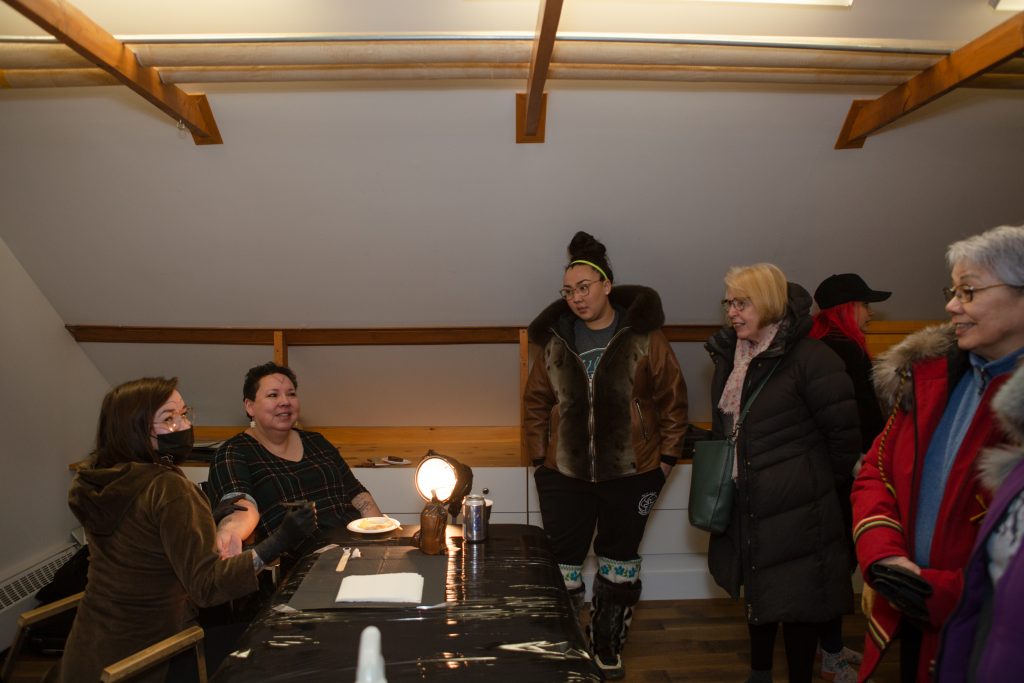 On the upper floor of the Nunatta Sunakkutaangit Museum, Paninnguaq Lind Jensen gave a live tattoo demonstration on Ane Lena Fussing Rosbach, an artist from Greenland. Other Nunavummiut were present to reclaim the space with acts of Inuit femininity. Teenage girls practised throat singing, Iqaluit-based artist Celina Kalluk drew potential facial tattoos on a young woman, and traditional Inuit folklore was recited to distract Ane Lena during her tattooing session. Paninnguaq answered questions about Inuit tattooing from the public while she tattooed.

“Our tattoos are for better times to come,” said Paninnguaq, “There are parallels in our universe. There is the sun and moon, the ocean and land, the man and the woman. And all that is in-between that we cannot see. That’s the world where all the spirits are. As a woman, we have a responsibility in the spiritual world through our menstruation and birth and death. So we also have a responsibility to maintain a balance between those worlds. And that’s the lines that I am doing.”

Before making her latest artworks, Arnaktauyok extensively studied traditional Inuit tattoo designs, which go back thousands of years, in ethnographic texts from across Nunavut.

“There was just a few of us having facial tattoos just 12 years ago,” said Hovak Johnston, “and now, when somebody talks about someone with facial tattoos, I have no idea who they are talking about because it can be anybody. It’s so beautiful to see all these young people proudly wearing their markings.”

Piujut Arnaqsiutit will be at Nunatta Sunakkutaangit Museum until May 2020. The exhibit was organized by the Nunavut Bilingual Education Society, with funding from the Qikiqtani Inuit Association. 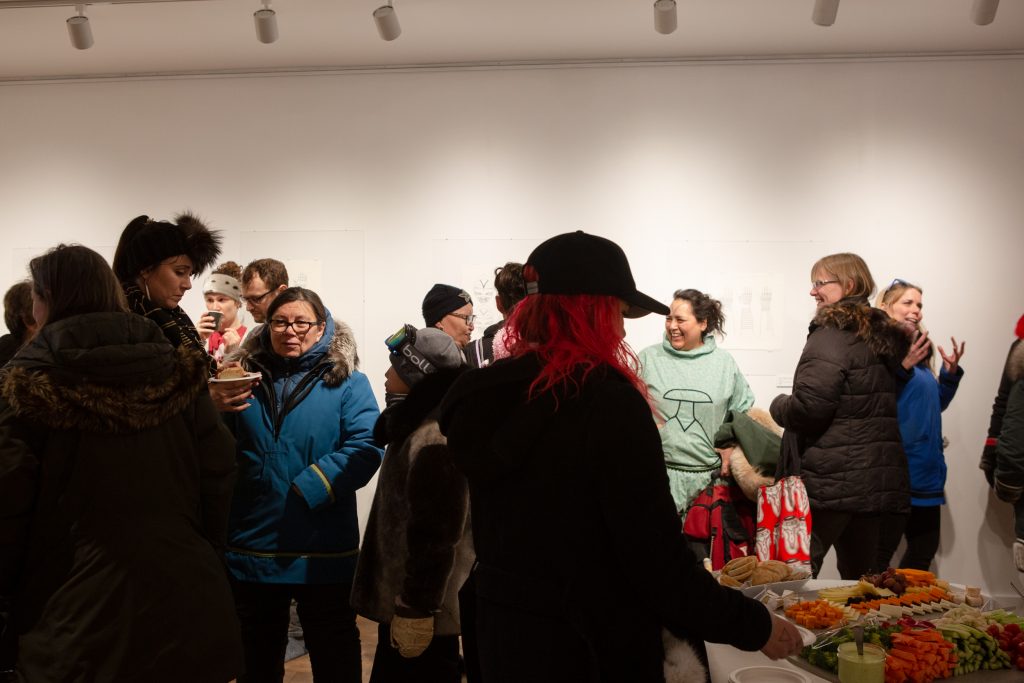 The crowd mingles over art and catering by the Black Heart Cafe during the opening reception for Piujut Arnaqsiutit. (Photo by Lisa Milosavljevic)