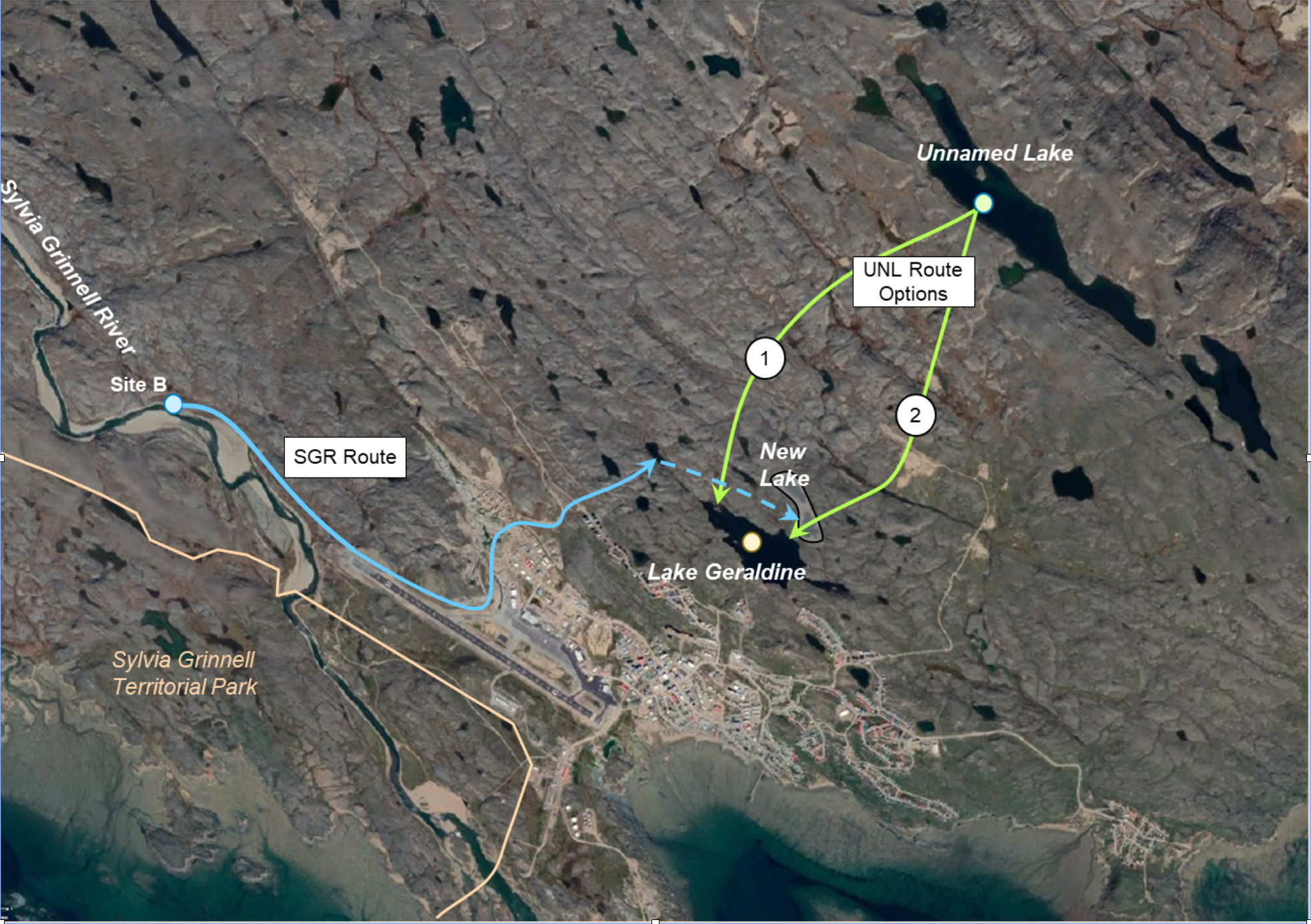 This image shows the two options for Iqaluit’s long-term water supply, either by pumping water through Unnamed Lake and the Apex River or from the Sylvia Grinnell River. (Image courtesy of City of Iqaluit)

A City of Iqaluit committee has recommended the city pump water permanently from Unnamed Lake to replenish its water supply.

Councillors approved the option in a unanimous vote Thursday night at an engineering and public works committee meeting. The committee’s recommendation still needs to go before city council for approval.

The recommendation comes after Stantec Architecture Ltd. presented options in June to bolster the city’s long-term water supply. Those options were pumping from Unnamed Lake, which flows into the Apex River; or pumping from Sylvia Grinnell River.

Councillors had the option to pump from either source seasonally or year-round, and went for the seasonal option at Unnamed Lake.

The city gets its water from Lake Geraldine, a naturally replenishing reservoir. In recent years, low precipitation levels have depleted the lake, forcing the city to pump more water into it from Apex River and Unnamed Lake.

The municipality is currently in a state of emergency because Lake Geraldine’s water level is so low that the city needs to pump more water than its water licence allows to get through winter, and is awaiting authorization to do that.

The city has pumped supplementary water from Apex River every summer since 2018.

Sumon Ghosh, the city’s director of engineering and capital planning, recommended to councillors the best long-term solution for the city is to pump from Unnamed Lake in the summer, rather than year-round, citing higher operations and maintenance costs with the year-round option.

Ghosh said the city could purchase and put the infrastructure in place next year, but plans are currently in place to have it completed by 2024. That could include fixes to the road to Unnamed Lake and installation of permanent pumping equipment.

This work would require a one-time expenditure of about $5.5 million for summer operations or $7.6 million to pump year-round.

Iqaluit’s Amaruq Hunters and Trappers Association is strongly opposed to Sylvia Grinnell River being used as a water supply because of its cultural and recreational significance.

But council members, including Nattaq, Stevenson and Bell questioned whether that river might be a better option.

Stevenson said he was worried about how reliable Unnamed Lake would be as a long-term water source, including whether the lake will replenish itself.

“It’s a little bit terrifying to make a decision … about a source that we’re not really sure is enough for our water,” he said.

Stantec representatives have told council in that past that even with the supplementary pumping from Unnamed Lake, the city currently uses 80 per cent of the water in Lake Geraldine by the end of winter.

The federal government will also kick in $214 million to build a second reservoir for the City of Iqaluit, among other improvements to the city’s water system. That money was announced in April.

Amy Elgersma, the City of Iqaluit’s chief administrative officer, said the city is also working on a waterways protection bylaw to prohibit things like people on snowmobiles from driving over the city’s water source or dogs defecating in the area.