“It is for anyone who has no other options” 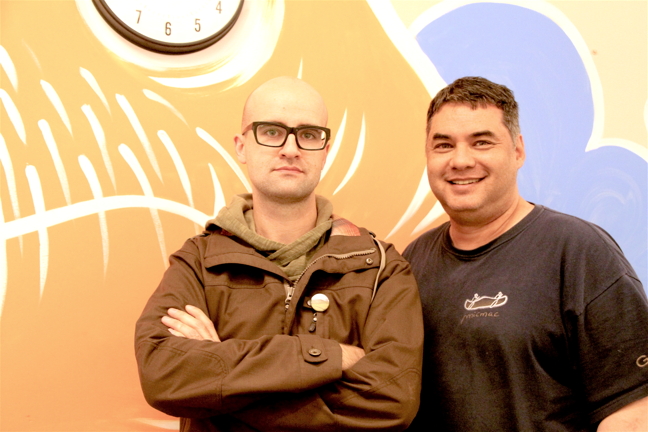 Wade Thorhaug, on the left, is executive director at the Iqaluit soup kitchen. He says the new “wet shelter” at the food centre is temporary and should only run for about a week. (File photo)

Iqaluit’s Qajuqturvik Food Centre started keeping its doors open at night this week to shelter people who have nowhere else to go.

“It is a very temporary option while Family Services searches for a more permanent solution,” said Wade Thorhaug, executive director of the food centre.

“We just had space that wasn’t being used at night.”

He said a permanent solution will likely be arranged within a week.

The move comes in response to the Qikiqtani General Hospital’s new rule, announced last week, which forbids homeless people from spending the night in the emergency room waiting area.

The hospital made that decision in response to an increase in incidents such as theft, verbal abuse of staff, people wandering through the hospital, public sex acts and domestic disputes,

Until then, the hospital had been used for years as a last-resort shelter.

If people had nowhere to go after shelter doors were locked at night, or if they were too intoxicated to be allowed to enter shelters, they could sleep at the hospital.

Lindsay Turner, director of poverty reduction at the Department of Family Services, said this is a “temporary pilot project” while the department searches for a location to fill the gap for the rest of the winter.

The department is working with the city’s shelter organizations to find a solution, she said.

The food centre “stepped up to the plate” after the hospital “faced increasing challenges,” Turner said.

She said she does not expect it to take longer than a week to find another location.

But a long-term solution “will take baby steps,” on a day-to-day, week-to-week basis, Turner said.

No alcohol allowed on the premises,
anyone in need will get shelter

The food centre turned into what Thorhaug calls a “damp shelter” on Monday night this week.

(In the human services field, the term “wet shelter” usually means a facility that grants admission to intoxicated persons and may even allow them to consume substances while inside. A “damp shelter” is one step short of that.)

The food centre’s temporary arrangement is not quite a wet shelter, as it does not allow people to bring alcohol onto the premises, Thorhaug said. But if you are drunk, you will not be turned away.

Additionally, he said, the space is not just for intoxicated people.

“It is for anyone who has no other options,” said Thorhaug, adding that five to seven people spent Monday night at the food centre.

The Department of Family Services does not want to appear to be encouraging more people to drink, Turner said.

Those admitted to the temporary food centre shelter will sleep on hostel-style cots, she said. And for now, food is not provided.

“Everyone is doing the best they can to provide for those in need,” Turner said.

“There are limitations on space. The shelters are often full and at over-capacity.”

A damp shelter has its benefits, Turner said.

“It is a low-barrier access to a safe space to sleep.”

A new not-for-profit organization is arranging staff and equipment for the project.

The Inukshuk Guardian Society is run by Dan Laffin, former acting director of the Uquutaq Society men’s shelter, and Matthew Clark, a former Uquutaq board member.

Clark told Nunatsiaq News on Dec. 19 that the new society had recently been registered.

The society runs a Facebook page where it solicits donations from Canadians in the south. Then it delivers these donations to homeless people in Iqaluit.

Laffin and Clark network through another Facebook page called Northern Canada Mini Projects, which has over 900 members. Members are located all across Canada, mainly in the south.

When asked on Tuesday about the society’s role in the temporary shelter, Clark said he was out of the community and has “no comment at this time.”

Shortly before the hospital adopted its new rule last week, members of the Inukshuk Guardian Society had posted videos of themselves delivering donations to homeless people sleeping at the hospital, criticizing the circumstances.

On Monday night, Laffin posted another video. This one was about the temporary wet shelter, calling it a success.

“I have to say this is going so well,” Laffin wrote when posting the video. “We have six people who truly needed this place tonight. Thank you all soooooo very much. Exciting times ahead of us.”