“It is very complicated when we are dealing with older infrastructure” 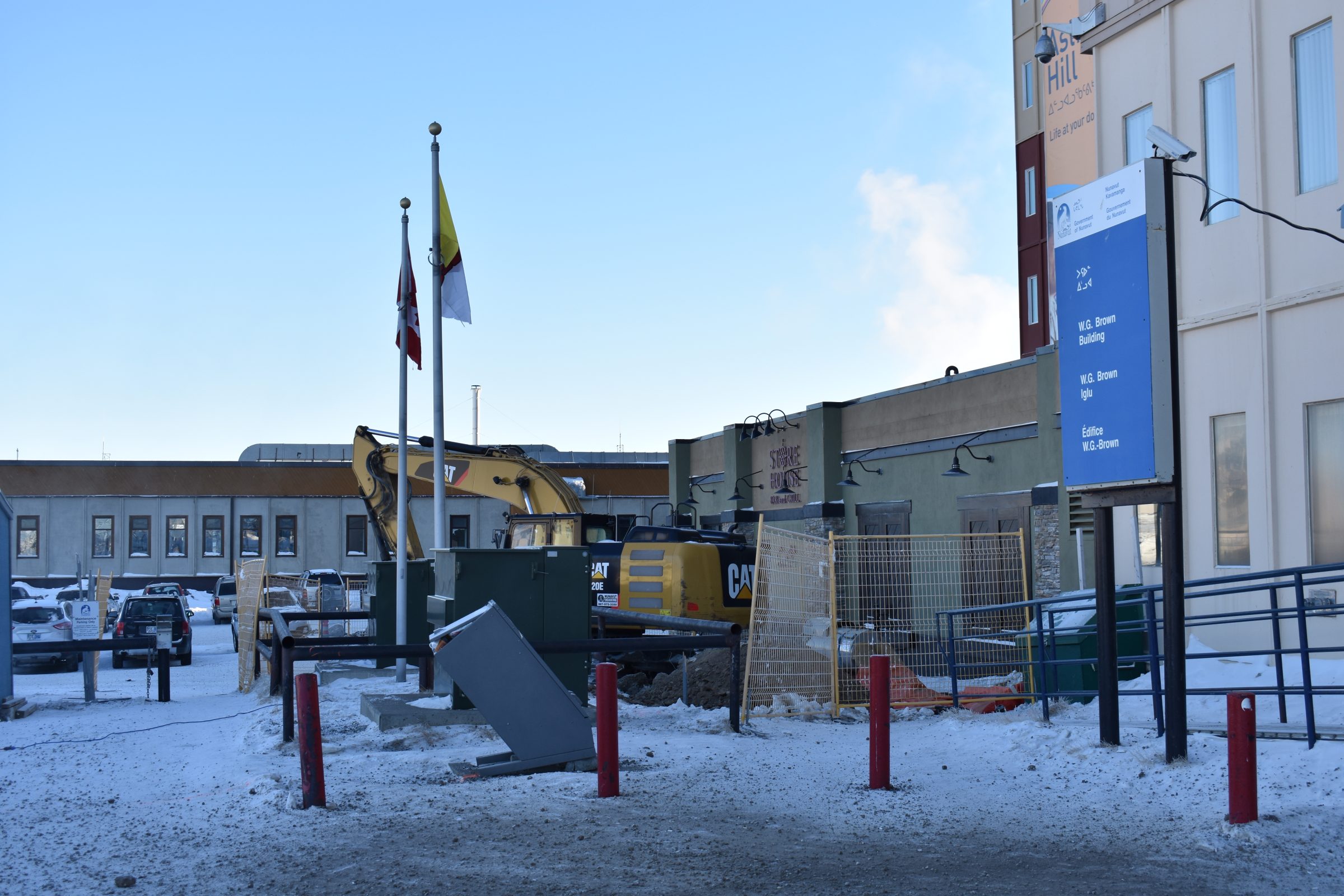 Iqaluit’s two tallest buildings have been having intermittent water issues for nearly four months. The City of Iqaluit says it is working to solve the problem. In the meantime, tenants are being offered water jugs, gym passes and laundromat vouchers. (Photo by Courtney Edgar)

Joe LaBine hasn’t been able to count on running water in his Iqaluit apartment since November.

He cannot flush the toilet, do laundry, wash dishes or take a shower during peak hours. Even during non-peak hours, he and his partner often just get air through the tap.

He lives on the top floor of Iqaluit’s eight-storey building, whose water issues since November are known to the city and the landlord, Astro Hill.

LaBine’s unit is just one of 24 per floor, from the fourth to the eighth storeys, that have had water problems in varying degrees for nearly four months.

The adjacent six-storey building is also having similar problems.

At the eight-storey, the seventh and the eighth floors often have low water pressure. From the fourth to the sixth floors, depending on the time of day and how many people are using water, whether taps will turn on and toilets will flush is the luck of the draw.

The first to third floors are having no water issues.

As well, the city started offering free passes to the aquatic centre for residents to go shower.

“It is nice that they are offering gym passes so we can go take a shower, but that is not really the part that is disruptive to our lives,” said LaBine.

He is annoyed by being unable to wash his hands when he is preparing food. The dirty dishes pile up. Meanwhile, he and his partner still pay full rent.

Property managers have offered an empty first-floor unit to residents to take showers and refill their water containers.

But one female tenant said that she’s scared to shower in an apartment that everyone has access to.

Now, the city is also offering laundry vouchers so residents can bring their loads to the laundromat.

As well, parking spaces won’t be accessible while workers dig up underground pipes this week. The city has asked Inuksuk High School to allow tenants to use its parking lot for the next week while the school is closed.

But next Monday, another solution will be needed when students return to class.

Michael Powell, Astro Hill’s general manager, said the city had told them the issue would be fixed last Friday.

When that didn’t happen, Astro Hill asked the city for another update.

Elgersma and Redfern brought Craig Olson, a city engineer, to describe the work that was done last week, the complications that came up and the new ideas for work moving forward.

“We want to let you know that the city is doing everything that it can to move this project ahead,” Elgersma said on Sunday.

“It is very complicated when we are dealing with older infrastructure.”

City staff did believe they could fix the issue by the earlier deadline, Olson said, but new obstacles keep popping up.

The last plan Olson’s team had was to insert a smaller pipe inside a larger pipe to carry the water to the building.

But Olson said the pipe was frozen. And when pipes freeze, ice expands and he found the original pipe was “compromised.”

“So then the thought was, OK what do we do? So the idea was then why don’t we continue toward the building, and remove all the pipe right to the building and make a connection,” said Olson.

But then the crew discovered an electrical feed over the water main. That made exposing the water main difficult in the winter months, because they would have to shut off power to both buildings, residences and businesses alike, for at least a day and a half for each side.

And doing that in winter could create a ripple effect of other larger problems.

“So that means we would have to shut this whole complex down, twice,” said Olson.

“We can’t do that. We have already inconvenienced everybody to a point where we cannot do it anymore.”

Olson said the city has staff working on this 24 hours a day, trying to find a temporary solution that’s more convenient than interrupting power to so many people in the winter.

The work goes on

“We are still outside there digging, still out there exposing and trying to find out what is compromised—and, for some reason, someone stuck a giant concrete block on top of the pipe right where we want to work,” said Olson.

“So we are running into a stone wall every time we turn around and we have to keep dealing with it and trying to find something that is going to work from now until summer.”

A permanent solution won’t be found at this time of year, he said.

While the Department of Health said the city has provided them a deadline of Feb. 22 for water service to be restored to the buildings, Olson said they may still encounter further problems.

“I am not going to lie to you—I can’t give you a time frame,” Olson told the meeting on Sunday.

Over the weekend and on Monday, city workers installed temporary barricades and signs for traffic control between the Astro Hill complex and the high school.

As well, the crew excavated an old pipe made from transite—a mixture of cement and asbestos—at the Frobisher Inn building and thawed it between the roadway and the building.

This was to prepare for the insertion of a new pipe, made from high-density polyethylene, or HDPE, inside the old one.

On Tuesday, the crew plans to cut and remove the transite pipe section near the building, continue thawing and inspect the old pipe to ensure there are no obstructions to stop them inserting a new pipe inside.

Last summer, the city estimated that about 20 to 40 per cent of city water ended up wasted through leaking infrastructure.

The current magnitude of the problem will be more clear in March, when there will be a full year’s worth of reporting using the right metrics—the city said there were problems with previous calculations.

The city had said in the fall that 45 problem pipes were identified and repaired during the water shortage. But these pipes at Astro Hill were not found to be a problem in that investigation, Elgersma said.

“The leak investigation looked at leaks that could be seen at access points such as AVs and manholes, and this was underground and would not have been detectable until it surfaced,” said Elgersma.

“And it didn’t manifest itself until well after the leak investigation had been completed.”