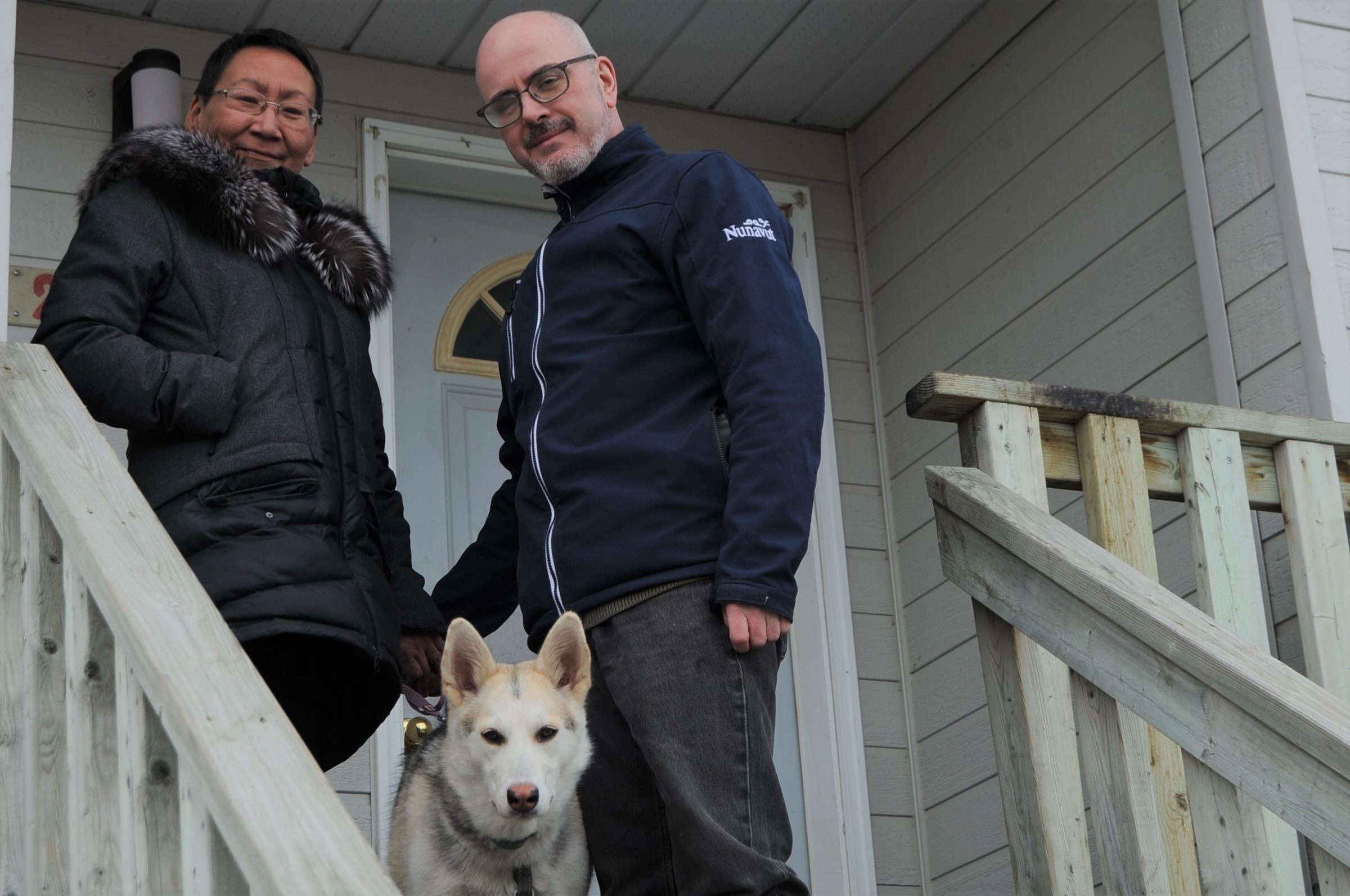 Jeela and Stéphane Palluq-Clouthier stand outside their Iqaluit home with their dog Brynhldr. “Our youngest son picked the name. He was working at the animal shelter and it was a small dog, a small puppy…. We decided to adopt her in early November. She’s been keeping us very busy with walks and taking care of her,” Jeela said. (Photo by David Venn)

There were days after the death of their son when Jeela and Stéphane Palluq-Cloutier were so consumed by grief they’d forget to eat.

“There were days we could not even get off the couch,” Jeela said.

Simon Atagoyuk died by suicide last September and since then, the couple has searched for help coping with the loss.

There are resources out there, but at first Jeela and Stéphane had trouble finding them. They partly blame the pandemic and the fact they didn’t know where to begin looking.

It wasn’t until late December — four months later — that Stéphane first got to see a counsellor through Iqaluit’s mental health facility.

“It was just taking too long and it was very, it was hard,” he said.

But the Nunavut government has drastically changed how it offers its mental health services since last year, and not only is Stéphane happy to see it, he wants to spread the word.

“They now have drop-in clinics,” he said.

“So you just call first thing in the morning and if there are spots available during the day, you can be seen within the same day. That’s a big change.”

Earlier this year, Nunavut’s Department of Health partnered with Iqaluit’s mental health and addictions team to make it easier to get access to mental health care.

“We were able to contact everyone on the wait-list to book an appointment,” she wrote in an email to Nunatsiaq News. “There have only been a few instances where people calling in for an appointment had to wait one extra day to speak with a counsellor.”

Jeela was able to connect with a counsellor through the non-insured health benefits program.

“It’s helped me to give myself goals and routine,” she said. “And [I’m] able to say things to someone that maybe I would not say to my husband.”

Stéphane is still searching for another form of support he believes will help — he hasn’t found any support groups in Iqaluit for survivors of suicide loss.

He said joining one would help to make him feel less alone.

“Maybe [we would] be able to talk to each other and maybe share some ideas or healing,” Stéphane said. “Or even just break down and cry.”

The council is working towards providing a virtual support group experience, but has yet to solidify plans, she said.

Johnston said there are barriers to hosting virtual services, such as technical restrictions, but it’s an important service that the organization is motivated to find solutions for.

“We don’t know how long COVID is going to be interrupting our lives,” Johnston said. “We’re not going to give up.”

For now, Jeela and Stéphane live in their home in Iqaluit with their dog, Brynhyldr. One of their sons brought her to them to foster after Simon died, and they adopted her in November.

She was responsible for getting them out of the house and moving in the early days before they were able to receive professional help.

“She really helped us bounce back,” Jeela said.

The days roll on, and the pair continue to make use of the resources that are available to them, though, Stéphane said, there are lots of questions that are left unanswered.

“I don’t know when and if ever we’ll get over the pain,” Stéphane said, “but we now have some tools to better cope.”

Inuit and non-Inuit can request same day appointments Monday, Wednesday and Thursday by calling 867-975-5900 when the clinic opens at 8:30 a.m.

There are also 22 hours of counselling available each year to Inuit through the non-insured health benefits program run by the federal government, with the option of more hours being allocated.

And Government of Nunavut employees can access the government’s employee and family assistance program, which offers free counselling to employees and their families.