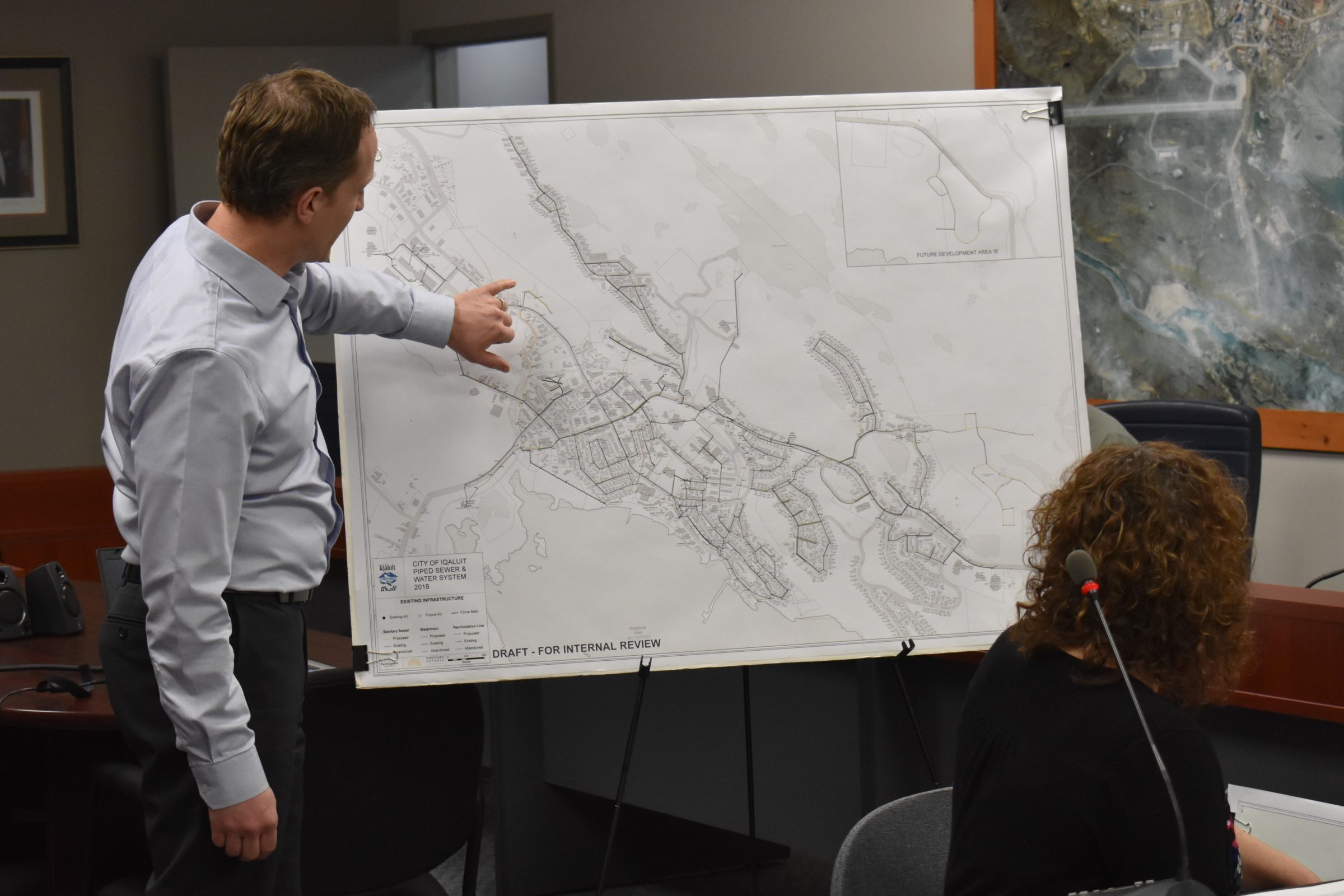 Matthew Hamp, director of engineering and public works at the City of Iqaluit, shows where the planned new sewer line, paid for by proposed development charges, will run. It is the yellow squiggly line that runs below his finger and to the bottom left of the map. (Photo by Courtney Edgar)

The City of Iqaluit plans to create new development charges that would fund the replacement of an old sewage line that’s currently at capacity and is to blame for some messy spills in the past.

“Iqaluit is a growing city with increased demands for land and development,” Jennifer Jarvis, Iqaluit’s city planner, said on Tuesday, March 12, at a public consultation about the proposed bylaw that would create these new charges.

“In supporting growth, the city engineering department has identified that capacity has been reached in the current sewer line from AV 253 to the wastewater treatment plant. The line requires to be changed and it is going to happen in this coming construction season.”

A development charge is a one-time fee levied by the city, paid along with issuing a development permit, and intended to support the cost of growth.

In this case, the city wants anyone looking to build a new home to pay a fixed fee of $929.84.

For any non-residential developments, the charge will be based on the size, at a rate of $7.88 per square metre of gross floor area.

Only about four people showed up at the first one, held last week, said Andrea Spitzer, the city’s communications manager.

This time, on Tuesday night, there were a few spectators but no one asked any questions or expressed any concerns.

Other Canadian cities do it

The idea is for “growth to pay for growth,” Jarvis said.

The proposed water and sewer development charges would be an additional revenue stream to cover the costs to install and maintain a new sanitary trunk sewer line.

“All revenue from the development charge will be funneled into a growth reserve fund to pay for “the off-site services that benefit all payees,” Jarvis said.

She explained that in 2012, Whitehorse implemented a similar development charge for a single detached home. It is $3,640.

As well, she said that Ottawa has an even larger development charge for single homes, which covers roads, water, sewer and parks.

Exemptions to the charge

This proposed development charge would apply to all new developments except for renovations or expansions of an existing dwelling, developments in trucked service areas where no future services are planned, and developments that already have a contribution included in the land costs, like Joamie Court.

The city also plans to provide the possibility of applying for exemptions to registered charities and non-profit organizations.

As well, any development charges applied to industrial warehouses would receive a 50 per cent discount.

The sewage side of things

Matthew Hamp, director of engineering and public works, spoke about the long sewage line that needs replacing and needs these charges to pay for it.

It runs from across the street from the Public Health building—around Pai-Pa Taxi and the old Navigator Inn building—down past the apartments by the creek and joins the flow path behind The Discovery Inn.

From there it will run all the way to the waste water treatment plant.

“We have seen occasional overflows at this location right behind (the old location of) The Nav that came about a couple years ago,” said Hamp, pointing at a map of the city that shows the sewer line.

“We had the waste water treatment plant project on the go already, so it seemed an opportune time to upgrade the whole line. So this entire trunk will be upgraded.”