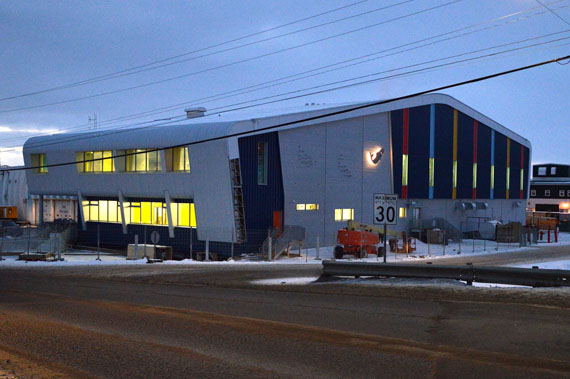 Iqaluit’s fitness centre is now closed and its Arnaitok and Arctic Winter Games arenas are open only during evenings until the do-not drink order is lifted, recreation director Stephanie Clark said. (Photo by Steve Ducharme)

The City of Iqaluit’s recreation department has shut several recreation facilities so staff can be diverted to help address the water emergency, recreation director Stephanie Clark said on Tuesday.

“We did not make this decision lightly,” Clark said, adding she knows the important role recreation plays in the city.

The recreation department is responsible for most of the bottled water distribution in the city, Clark said, adding that demand for water delivery has increased.

“We held off as long as we could,” Clark said of the decision.

With recreation staff working past their normal hours, helping workers avoid burning out was also a consideration, she added.

By closing certain recreation facilities, staff who have not been working solely on the water emergency can help those that have, Clark added.

“[This] gives us an opportunity to spell some of those staff and rotate them out so they get a well-deserved break,” she said.

Iqaluit is in its eighth week of a water emergency after diesel fuel was detected in the water supply on Oct. 12. The city has been under a do-not drink advisory for tap water since then.

The department previously had 15 to 18 staff working on water delivery and now they will have 25, Clark said.

The city has been hiring water distribution helpers at around $33 dollars an hour since Nov. 22 and the recreation department has a couple casual workers with them now, she added.

In a message to Nunatsiaq News, Mayor Kenny Bell said the city still needs help with the water emergency and continues to hire for water distribution positions.

Recreation staff are fully committed to water distribution until the emergency is over, as the fitness centre will not reopen and the arenas will not resume normal hours until the do-not drink order is lifted, Clark said.

She added that she does not know when that date will be, but she and her department are looking forward to it.

“We are desperate to get back to normal,” Clark said.

“We just want to do recreation.”