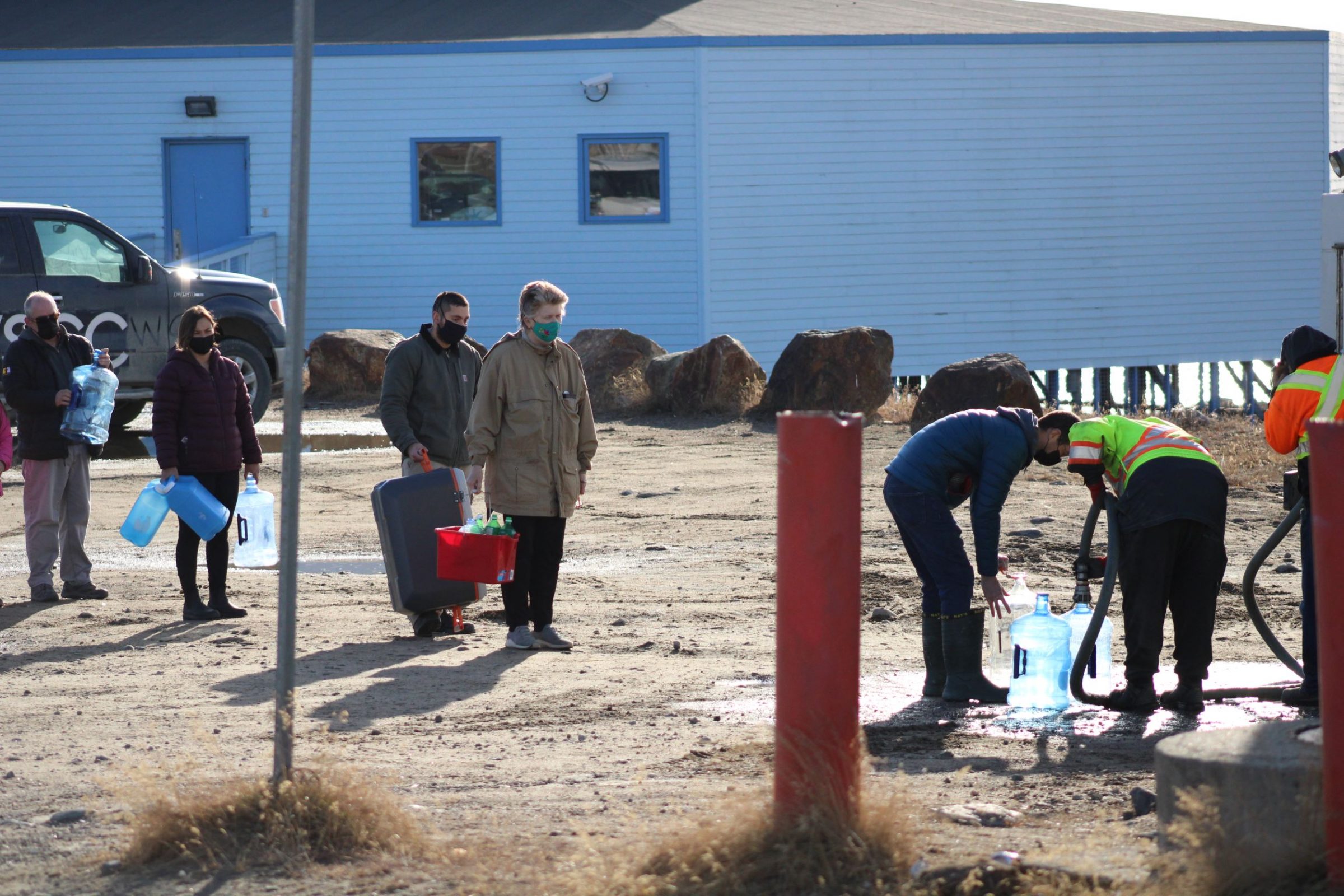 Iqaluit residents line up to fill jugs with clean water supplied from the Sylvia Grinnell River on Wednesday afternoon. (Photo by David Lochead)

Iqaluit residents expressed frustration as they lined at the Iqaluit Centennial Library up to fill jugs with clean water supplied from the Sylvia Grinnell River on Wednesday afternoon.

The fill station is operated by the city, following Tuesday’s announcement that petroleum is believed to have been found in the city’s water supply. That night city council declared a state of emergency. Residents had complained since early October about tap water smelling like gasoline, and the city had initially responded by saying the water was safe to drink.

Elizabeth Katcheea was among those waiting in line for water at the library. She said she’s stressed out by the possible water contamination. She stopped drinking city water on Tuesday, but had been doing so over the past week.

“I’m worried about what happens to your body after drinking petroleum hydrocarbons for five days,” Katcheea said.

Katcheea said she has had an upset stomach for five days, but is also worried as a mother, as her son has been coughing recently.

Nicole Etitiq said she came from work to stand in line to get water for herself, friends and family. She said is nervous about the water she has been consuming — for example, she cooked with tap water on Tuesday.

Etitiq also said she has had a headache for the past few days.

She also worries about the more vulnerable members in the community, such as pregnant women, elders and people who are not able to get their own water.

Linda Guitard said she is not worried about her own ability to get clean water. But she said she does worry about hospitality workers. If restaurants, which rely on water, have to close, that means their employees won’t be able to work because of the water problems, she said.

In the grocery store, Karen Logan said the lack of clean water is affecting the food she buys, such as vegetables that need to be washed.

“There’s so many things I won’t buy now,” Logan said.

Connie Naulaq said she has been experiencing headaches over the past week.

Naulaq also said she is looking after three dogs and attributes the water to the dogs’ case of diarrhea.

Both Etitiq and Naulaq said they were upset the city did not listen to residents who had complained about their tap water smelling like gasoline over the past week.

“I hope moving forward they listen to the city’s citizens,” Etitiq said.

Mayor Kenny Bell has said the city’s water passed tests when initial complaints were received. But on Tuesday, workers at the city’s water treatment plant found indications of petroleum contamination.

Naulaq said she has clean water now, but is concerned about the near future.

The city has said that anyone who needs special assistance to access clean water can call their water hotline at 867-979-5603. Water now being distributed by the city is under a boil water advisory.