Iqaluit residents grieve a tragedy far away, yet close to home 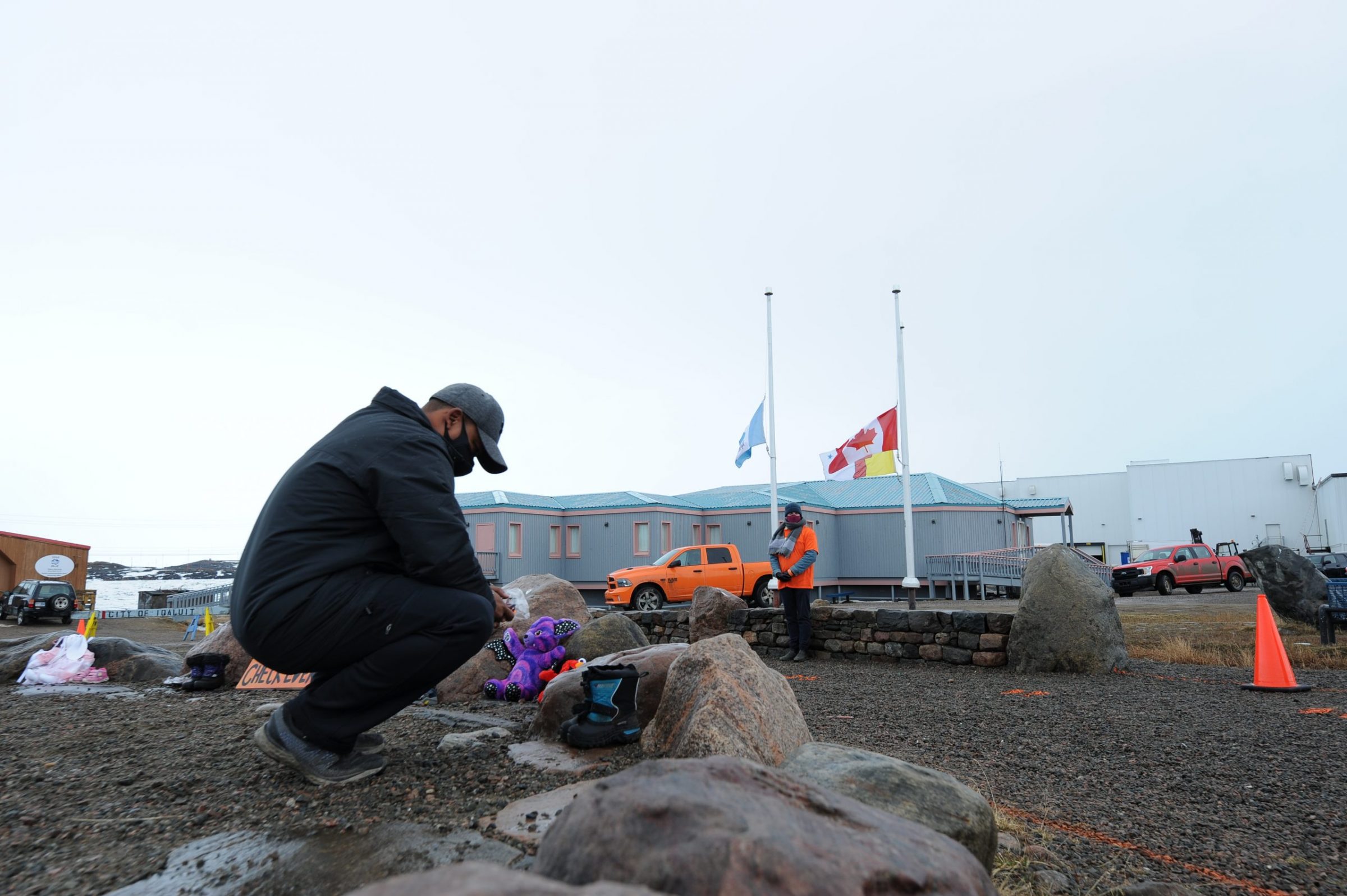 Dozens of people walked through the vigil in Iqaluit Square Friday afternoon to honour the lives of the 215 children whose bodies were found buried at a mass grave in Kamloops, B.C. (Photo by David Venn)

T-shirts, shoes, stuffed animals and signs bearing slogans such as “Check every school” were among the items left in Iqaluit Square Friday afternoon during a vigil to honour the lives of the 215 children whose bodies were recently found buried on the grounds of a residential school in Kamloops, B.C.

Dozens attended the event, standing in silence for two minutes and 15 seconds at the top of each hour – to commemorate each of the children – and placing offerings in the centre of the square.

To respect pandemic precautions, the event, which ran for four hours, had no more than 50 people in the square at a time.

“Not only are we here to mourn and pay respects for these children, we want this to be a celebration of their lives and legacy we are left with,” said Rachel Michael, a service coordinator at the Arctic Children Youth Foundation, one of the organizations that put on the vigil.

“These children are sadly only a fraction of the thousands of children that were taken and never returned home.”

Tristan Kanatsiak said the gathering made him think about how the discovery in Kamloops related to how colonialism affects his community — how many more elders, for example, there could have been to talk to.

“I feel sad,” he said. “I could just imagine how our land would be with all the children that died.”

Vinnie Karetak said he went to pay his respects to the children, and as he walked among the shoes and stuffed animals, he reflected on his own loved ones.

“I thought of my six-year-old child and wondered how someone so helpless and small can be treated in such a way,” he said. “It’s inhumane.

“What happened in Kamloops, it resonated all across the country for Indigenous folks.”

Oolamie Kakkee said that the vigil made her she wonder if she had relatives that accounted for some of the 215 students who were buried.

“Somehow, in my mind, I might have cousins over there, too,” she said.

The vigil gave the opportunity for a community with a shared experience to grieve together, Kakkee said.

“In those days, they hardly wrote down whoever got taken away and some people don’t know where they’re buried,” Kakkee said. “There should be closure.”

Karetak spoke of the same concerns, saying that he wants the tragedies endured by Indigenous peoples to be recognized.

“Do we want the government to look at it? Of course. Do we want people to see how it affected us? Anything less would be wrong.

“If people could just see how much pain it caused and it still continues to give,” he said.

And lastly, Karetak said, there is resilience.