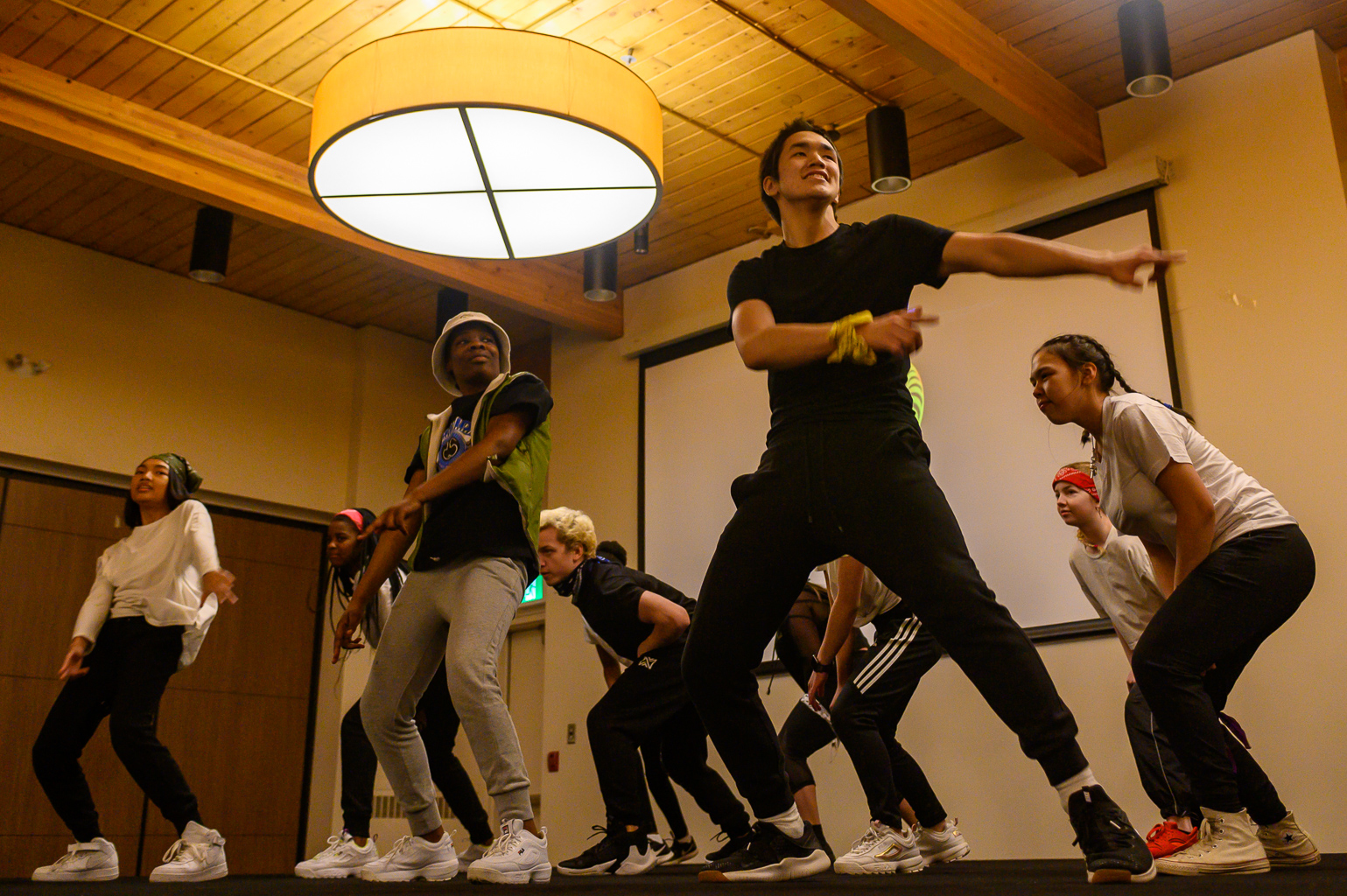 On a late Friday afternoon at Iqaluit’s Inuksuk High School, after the last bell of the day has rung, shoes can be heard squeaking on linoleum floors while rap music and laughter drift down the hallways.

In the centre of the high school, in a space called the Tisi, a group of students are rehearsing a hip-hop routine they’ll perform at an upcoming Black History Month kick-off event in the city.

The students are part of a national dance program called Outside Looking In, a non-profit organization that brings Indigenous communities together through dance.

While the program is in its second year at the high school, it has been running in other schools across Canada since 2007.

Tracee Smith, who grew up dancing and studied dance in university, is the founder of Outside Looking In.

“I started it for a few reasons. One was to inspire kids to stay in school and give them a reason to come to school. Dance and music is always good to do when you’re in high school. A lot of our kids gravitate towards that,” Smith said.

The program now includes over 200 students from across the country. Inuksuk’s program has 22 students currently enrolled.

To sign up for an Outside Looking In program, schools or organizations must first apply. If accepted, they must also pay a $50,000 fee, which Smith said most groups have been able to pay through grants or funding programs.

“Dance is so powerful. A lot of kids come together from different parts of the community and it begins to break down those barriers. You kind of lose yourself in the moment. There’s lots of studies that show how certain endorphins get released when you dance. Your stress reduces,” Smith said.

Back in the Tisi, Childish Gambino’s “This is America” plays from a speaker. Elbows jab left, then right. Students hop back, slide to one side and nod their heads, all in sync with each other and in time to the music.

It’s a complicated routine—one that that the students have choreographed themselves. 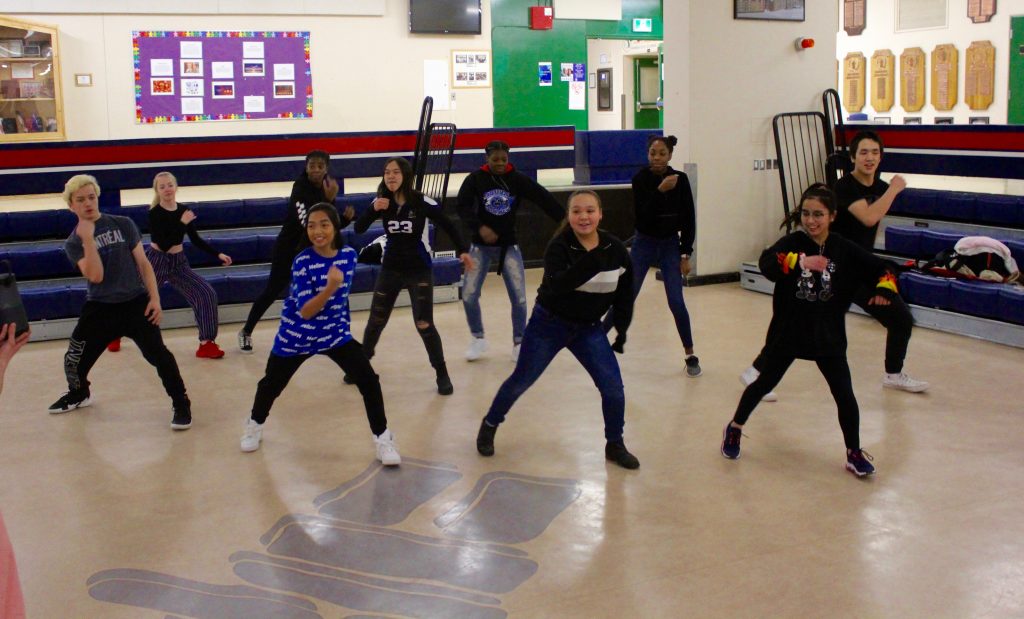 Inuksuk’s Outside Looking In dancers rehearse their hip-hop number on Jan. 31 in the school’s Tisi. (Photo by Emma Tranter)

Jaydin Nungaq, a Grade 11 student who grew up in Iqaluit, has been dancing since elementary school. This is his second year as a member of Outside Looking In.

“I just love how it can get me the exercise I need and it gets me active and I get to have such a great time. It gets me in such a happy and energetic mood,” Nungaq said.

For Grade 9 student Loulah Omar, who was born in Zimbabwe, the program helped her continue dancing when her family moved to Iqaluit in 2018.

“Mostly my aunties used to dance in front of me when I was a baby. So I have this thing with dancing a lot. And then I started doing hip hop in 2014 and I really enjoyed it. So when I came here, I really hoped there was going to be hip hop here,” Omar said.

Omar and Nungaq are two of 22 students who are part of Inuksuk’s Outside Looking In program.

Outside Looking In promotes more than dancing. Along with participating in regular dance rehearsals, students must maintain at least a 65 per cent average in their classes and a solid school attendance record.

And if students don’t meet those requirements, they won’t be allowed to continue the program.

“Our program is very strict. We monitor the kids weekly in terms of how they’re performing in the program. You don’t usually meet too many dancers that aren’t usually good students. When you start dancing two, three hours a night, you have to then come home and do your homework. So it kind of forces kids to be more disciplined and stay on top of their homework,” Smith said.

Each community in the program has a designated dance instructor who travels bi-weekly or bi-monthly to work with the students for two hours a day, five days a week for six to eight months.

But Inuksuk’s program is at the point now where they’re choreographing routines on their own and rehearsing two hours a day most days of the week.

“We love that they’re rehearsing three to four times a week. They’re probably going to be one of our strongest groups in the show this year because they practise so much,” Smith said.

The program culminates each year in a two-week rehearsal and performance in downtown Toronto where all involved communities come together to showcase their work.

For Nungaq, performing on stage can be nerve-racking at first.

“You feel nervous that you’re going to mess up or do something wrong that’s going to make you stand out. But when you’re actually doing all the dancing, you get a good rush. You feel your heart pumping. All the hard work you put in, you’re throwing it out there,” Nungaq said.

“Mostly on stage, I really get pretty scared. When I’m surrounded by my friends, they kind of take it away. And then when the song comes, I mostly forget about the people in front of me and just dance like in practice,” Omar added.

Nungaq, who will graduate from high school next year, said he hopes to continue dancing for the rest of his life.

“Dancing can connect people as a community together. It connects people around the world and I definitely believe dance up north can be such a strong thing for students. It can inspire students to become more productive in school and outside of school. They could definitely change because of dance,” Nungaq said.