Iqaluit searchers look outside the city to track missing teen

Searchers following footprints left by someone missing a shoe 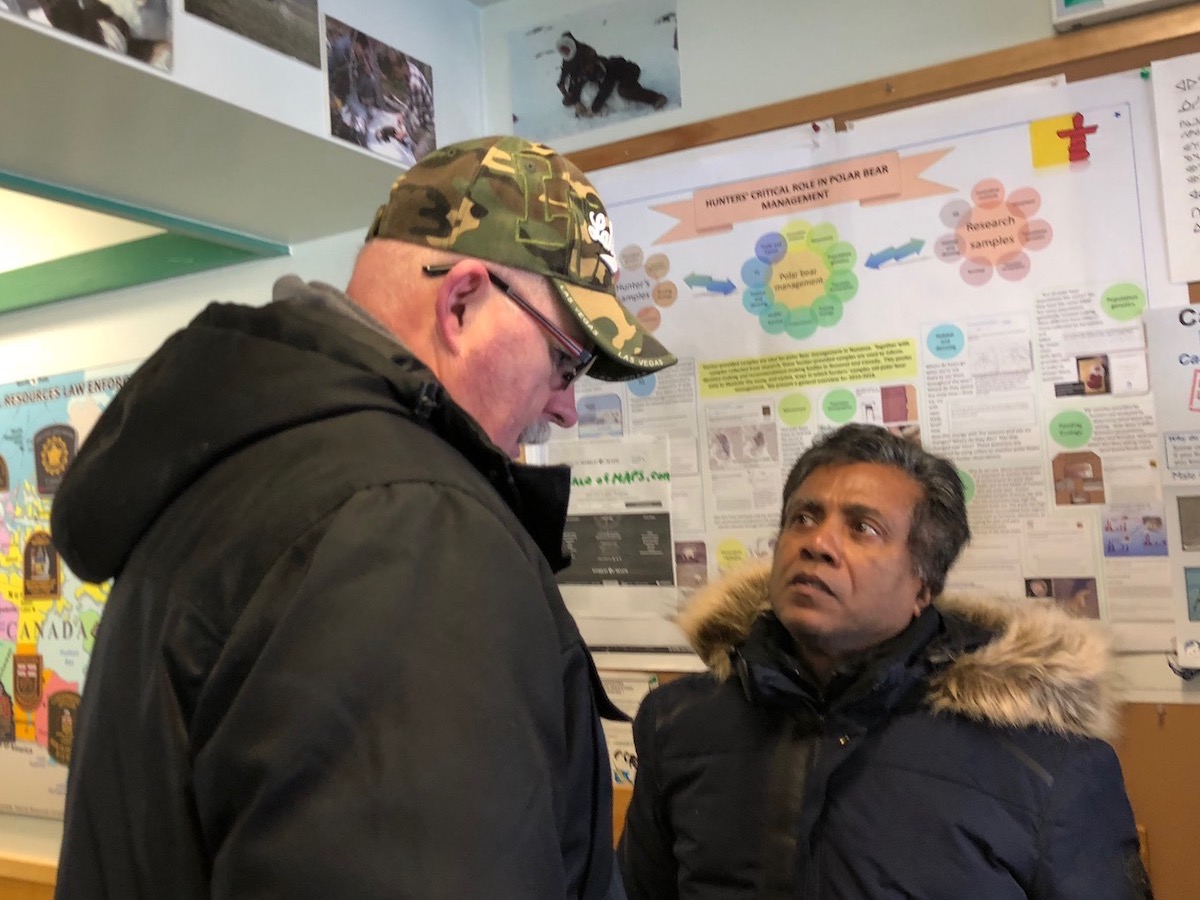 The Iqaluit RCMP detachment’s Staff Sgt. Garfield Elliott speaks to Amal Roy, the father of the missing 18-year-old, Ambar, on Sunday before searchers prepared to receive a briefing on Ambar’s possible whereabouts. So far, searchers, hampered by weather, have tracked the teenager to a point 10 kilometres away from where he was last spotted on March 13. (Photo by Jane George)

At about 11 a.m. on Monday, despite blustery, cold weather in and around the city, searchers in Iqaluit planned to go out again on snowmobiles to find 18-year-old Ambar Roy, who was last spotted on March 13 near a bridge along the Road to Nowhere, at the outskirts of town.

But later, their departure was put off due to the poor weather and was later postponed to Tuesday, at 8 a.m., when conditions were expected to improve.

The continuing search for the missing teenager, a student at the University of Waterloo, is not yet being called a recovery effort.

But Iqaluit RCMP Staff Sgt. Garfield Elliott said today, “we are closing in on that aspect.”

That’s due to the length of time the teenager has been missing and the fact he appears to have covered an “insurmountable distance,” Elliott said.

As well, the tracks show that Roy was wearing only one shoe.

“We never found any shoe, but it appears he may have lost a shoe,” Elliott said.

Since Roy was last spotted on March 13, the weather has often dipped into the -30s, with even lower wind chills.

For now, the efforts to find Roy will continue, weather depending, Elliott said.

On Sunday, tracking led the searchers about 10 kilometres northeast of the Road to Nowhere, Elliott told Nunatsiaq News. 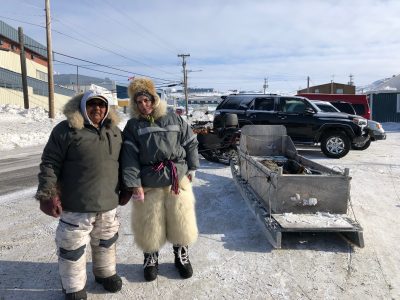 Searching on the land in cold temperatures demands warm clothing. Here are two of the 30 or so searchers who came out Sunday, with their snowmobiles, to look for Ambar Roy. (Photo by Jane George)

The search on Sunday saw the group following a track route past the Upper Base, and by darkness they were about 10 km from Iqaluit, he said.

On Friday, police and members of Nunavut Emergency Management had first started to search from the Road to Nowhere based on confirmed information that an unidentified driver had let Roy out there on March 13.

However, a storm on Saturday made it more difficult to follow the tracks. So that took more time, Elliott said. But they were able to follow the same tracks for an extended distance, he said.

“Based on the initial tracks being identified at the Road to Nowhere, they have continued following those tracks,” he said, adding that the tracks they found supported information about Roy’s actions after he was dropped off on March 13.

Elliott said there is no information to support the idea that Roy remains in the city.

As for how long the search will continue, Elliott couldn’t say on Monday morning: “Each day there is discussions with this respect, and it is judged on several components. It will be a decision made in conjunction with NEM. Deciding factors include length of time missing, areas searched that do not produce new leads/information.” 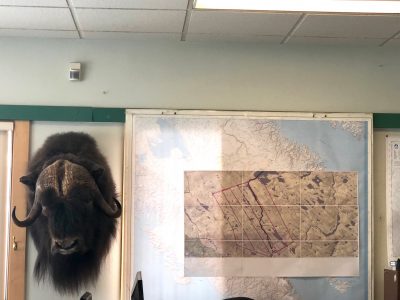 The map in the Nunavut Wildlife Management office, to the right of the muskox head, shows the area near Iqaluit where searchers are now focusing on to find Ambar Roy, missing since March 13. (Photo by Jane George)

On behalf of the Iqaluit RCMP detachment, Elliott said he wanted to thank everyone who volunteered their time in the search, as well as those behind the scenes who provided food and beverages for the search teams.

Support to the Roy family has been greatly appreciated, he said.

Ambar’s parents, his mother, Bijoya, and his father, Amal, did not come to the management office on Monday, although Ambar’s father did come on Sunday to wish the volunteers luck with their search.

On Sunday evening, Bijoya posted a message to social media on an Iqaluit news page.

“Our heartfelt thanks and gratitude to friends on skidoos and RCMP who continued their search in Road to Nowhere areas for the second day,” Bijoya Roy said. “As they did not find any bad signs we are still very hopeful that my son is somewhere and safe. Our heartfelt appreciation and thanks to all Iqaluit residents for their continued support and prayers for my son. We hope to get him back soon.”

Many among the roughly 8,000 residents of Nunavut’s capital have also hoped for the same result.

Ambar Roy and his family are newcomers to Iqaluit, but his disappearance resonates among Inuit and non-Inuit in this community who understand loss: searchers have been unable to locate two missing men in recent years, several have died in on-the-land accidents, and many, especially young men, continue to take their own lives.