‘There’s generations of Inuit that have never stepped inside a qaggiq,’ says organizer Pitseolak Pfeifer 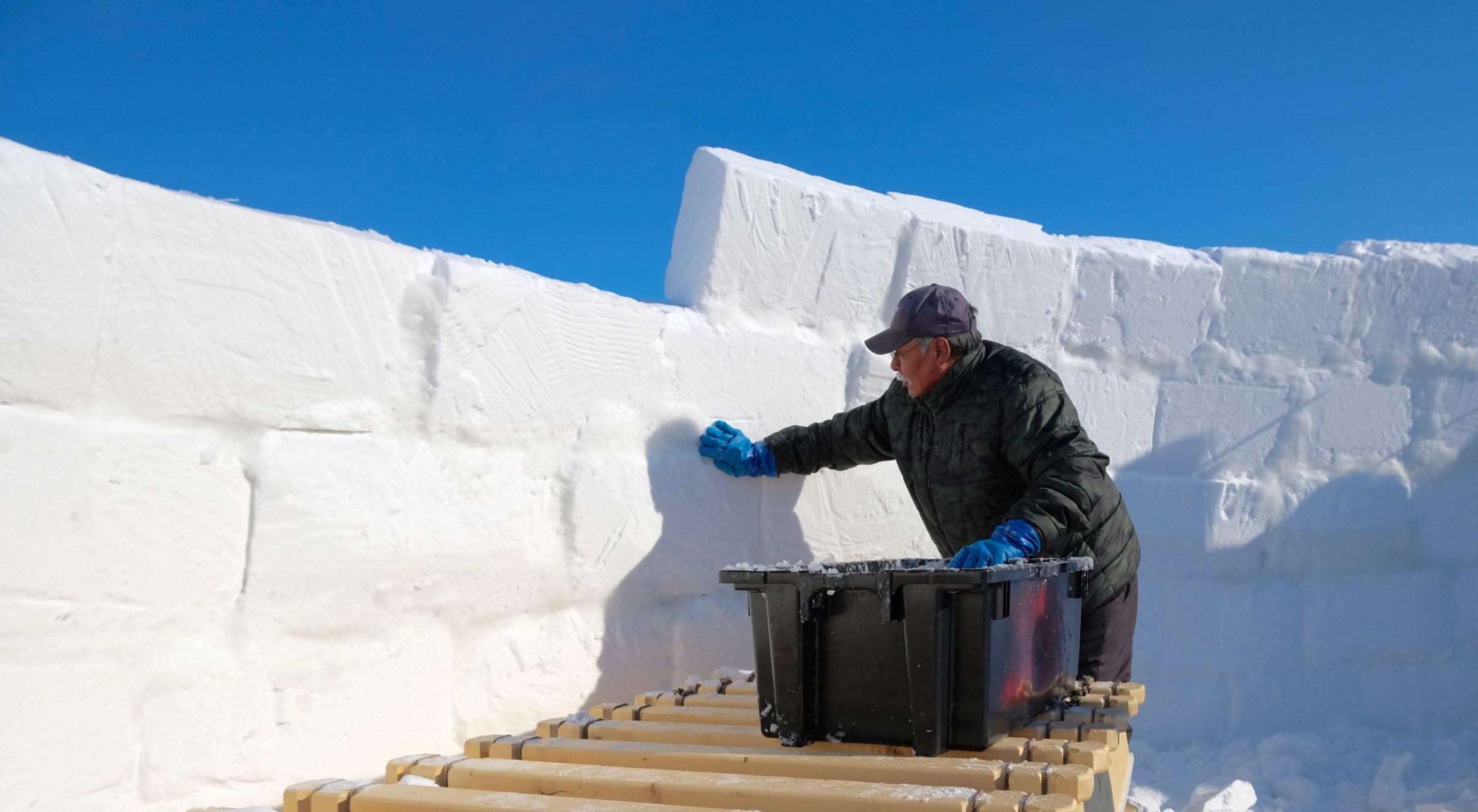 Jacoposee Tiglik is one of the team members building a communal iglu, called a qaggiq, outside Iqaluit. He is seen here sealing the cracks between snow blocks with water, which will quickly turn to ice. (Photo by Mélanie Ritchot)

With the labour of about a dozen people, more than 400 snow blocks and three snowmobiles, Iqaluit’s finest builders are working to complete a giant iglu to host artists and performers from across Nunavut this weekend.

The 700-square-foot qaggiq, or gathering place, will be the site of QAGGIQ 2021, the first festival Iqalummiut have seen in months, and will house the stage for more than 50 performers.

This will be the first time in recent history a qaggiq has been built in Iqaluit, according to Pitseolak Pfeifer, the executive director of Qaggiavuut!, the organization putting on the festival.

“There’s generations of Inuit that have never ever stepped inside a qaggiq,” he said. “We’re really proud to be able to do this here.”

Pfeifer said he’s been dreaming of having one of the “magnificent structures” built since he became executive director of the organization last October, but he thought that’s all it was — a dream. 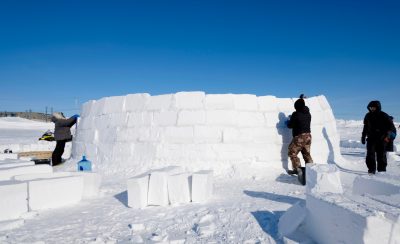 Over two days, dense snow blocks are being cut to size, stacked row-by-row and sealed together with ice to create Iqaluit’s first communal iglu. (Photo by Mélanie Ritchot)

It wasn’t until he approached master iglu builder Solomon Awa with the idea, that it started to become a reality.

At first, Pfeifer said he wanted the iglu to be 40 feet wide. When Awa suggested 20 feet would be more feasible, they settled on a 30-foot diameter.

Hypothetically, this could fit about 100 people shoulder-to-shoulder, Pfeifer said.

Now, Awa is leading the building team alongside Alex Flaherty at the site in Sylvia Grinnell Territorial Park.

Awa said he learned iglu building by watching his father construct them growing up. He also won an iglu building contest at Iqaluit’s Toonik Tyme festival about 15 years ago.

Soloman Awa, a master iglu builder, is pictured here stacking and fitting a snow block onto the structure. (Photo by Mélanie Ritchot)

At the busy work site, snow blocks are brought in on qamutiit – or dogsleds – behind snowmobiles, sawed down to size, then passed up to someone on a ladder. As the iglu gets built up row by row, the pieces get smaller and lighter.

Builders then seal the cracks and secure the blocks with warm water, brought out periodically so it doesn’t freeze before it can be applied.

The team was working non-stop on Thursday and Friday to get the qaggiq done by the weekend. With a warming shack on site and warm clothes, like sealskin hoods, the team is well-equipped for hours of hard work.

Pfeifer said the project is a reflection of how Inuit leaders were scientists and engineers in their own right, pre-contact.

He hopes to make this a yearly event, but the build is very expensive, requiring the expertise of master iglu builders. So, it will all depend on sponsors and funding in future years. 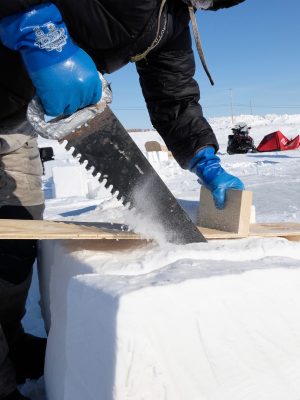 Snow blocks are sawed down to size, getting smaller row-by-row of the large iglu. (Photo by Mélanie Ritchot)

The QAGGIQ 2021 festival, which is free to attend, is being run in partnership with the Alianait festival and Tukisigiarvik Society.

Tukisigiarvik will have a traditional Inuit village set up outdoors for people to learn about Inuit culture between performances.

Children will also be able to learn drum dancing in the mornings.

She said she expects a very traditional experience all around, between having the qaggiq as a venue, the performances without modern sound systems, and traditional outfits.

“I’m looking forward to seeing happy people, we have all been cooped up for a while,” said Arreak, adding that the event has been approved by Dr. Michael Patterson, Nunavut’s chief public health officer.

Saturday’s lineup includes performances by Huqqullaaqatigiit, a drum dancing group from Cambridge Bay, and the world premiere of AKIA, a one-woman play by Sheena Akomalik. There will also be throat singing, jaw harp performances and more.

On Saturday, all performances will happen twice to give more people the chance to see the show.

On Sunday, the lineup includes ukulele, comedy and fiddling performances.