“If we shut off every single light and just sat in a cold, dark room in Nunavut, Canada’s carbon share would drop by 0.1,” premier says 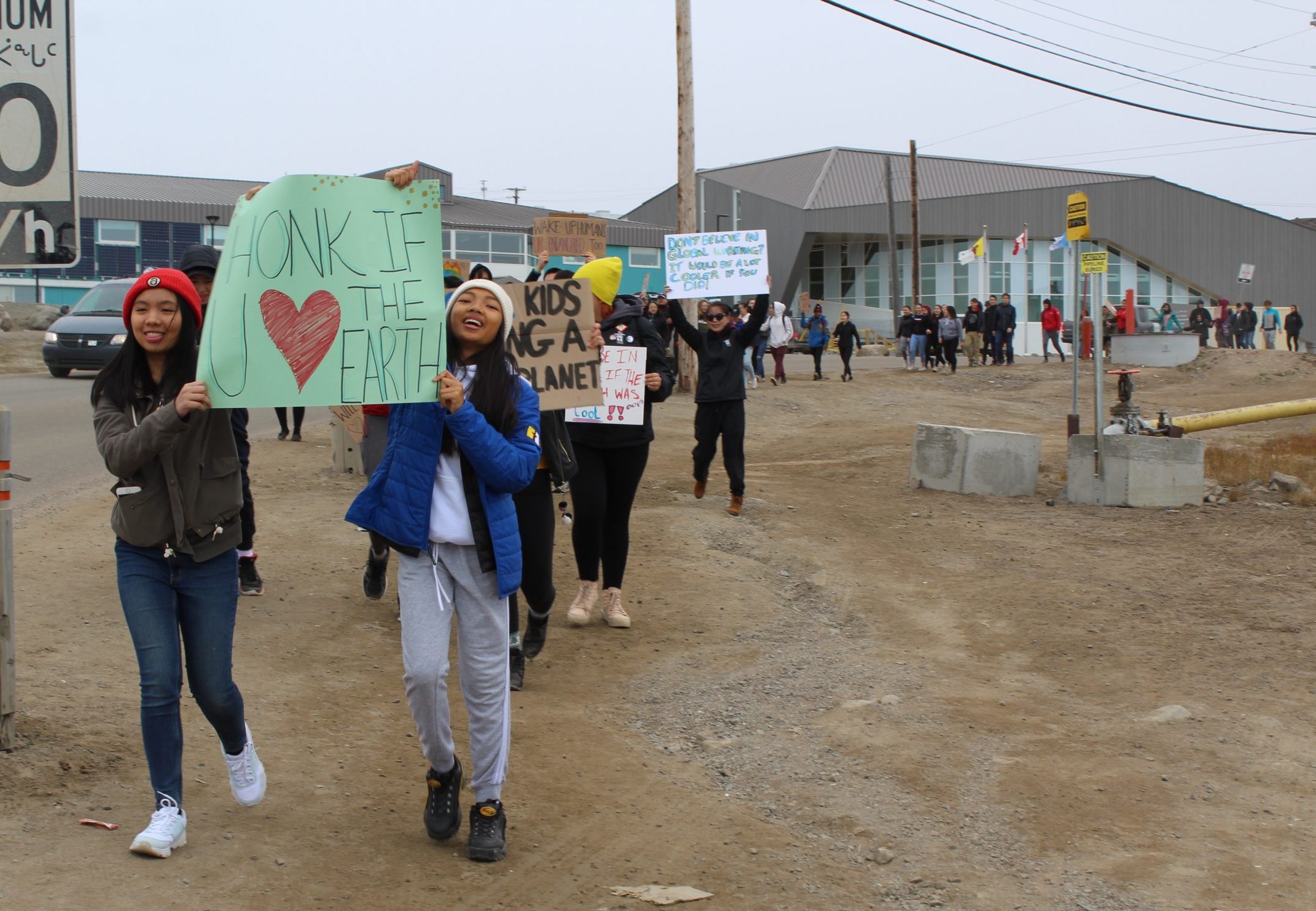 Iqaluit high school students wave handmade signs as they walk to the legislature on Wednesday, June 5, as part of a protest that urged Nunavut’s leaders to take action on climate change. (Photo by Emma Tranter)

On a rainy Wednesday morning in Iqaluit, about 100 Inuksuk High School students picked up cardboard signs, gathered their friends and walked out of school.

They marched to the legislative assembly to call on Nunavut’s leaders to take action on climate change as part of a protest on World Environment Day, on June 5.

Iqaluit-Manirajak MLA Adam Lightstone greeted the students on the steps of the legislature, announcing his support to them.

Inspired by what he saw and heard from the students that morning, Lightstone directed questions later in the afternoon to the premier about the government’s actions on climate change.

“Why are we the only jurisdiction in Canada that does not have an incentive program or offer rebates to encourage Nunavummiut to reduce our reliance on fossil fuels?” he asked.

Savikataaq said the territory has to rely on fossil fuels because “in Nunavut we have very few, limited options.”

“I’m sure the member does his part for climate change. Maybe he has a quick, warm shower instead of a hot shower…. Maybe he doesn’t take unnecessary trips to the south so that he can conserve fuel,” the premier said.

“Nunavut’s share of carbon is 0.1. That’s our share in Canada. If we shut off every single light and just sat in a cold, dark room in Nunavut, Canada’s carbon share would drop by 0.1,” he added.

Cassidy-Ann Netser, Angela Austria and Mac Pavia, the three Grade 12 students who organized the walkout, sat in the legislature during opening statements, but were not present for Savikataaq’s comments.

The three students said they started planning the protest a few weeks ago after a class lesson about the planet’s carbon dioxide levels inspired them to take action.

“Our teacher had pulled up this chart from NASA, and it showed the carbon dioxide levels in the air and it said it was at 411 parts per million. That’s the highest it’s ever been,” said Netser.

The students presented a written proposal to the legislative assembly that called on the government to, among other things, create a youth advocacy group, declare a state of environmental crisis, implement a climate action plan and increase investment in clean energy.

Citing the students’ proposal, Lightstone asked if the government would commit to the creation of a youth advisory council.

Savikataaq said the Climate Change Secretariat is already working on a youth advisory committee and a staff member has been assigned to the project.

When asked by Lightstone if the government would introduce a motion to declare a climate emergency, Savikataaq said he was unsure of the definition of “emergency.”

“We live in a small corner of this world where it’s being affected the most, but a lot of the factors that affect us are happening even outside of Canada,” he said. “The biggest emitters are not from Canada.”

The premier added that although he did not know what the declaration of a climate emergency would do, he encouraged all Nunavummiut to do their part in reducing their carbon footprint.

Austria said the students will continue to push for change, and hope students in younger grades will take on their initiatives after she graduates.

“The Arctic is warming at three times the global rate. I think it’s really important for us to be catalysts for change,” she said. “Because this is our home.”