“When our systems to keep our infrastructure from freezing break down in the Arctic, we are in trouble” 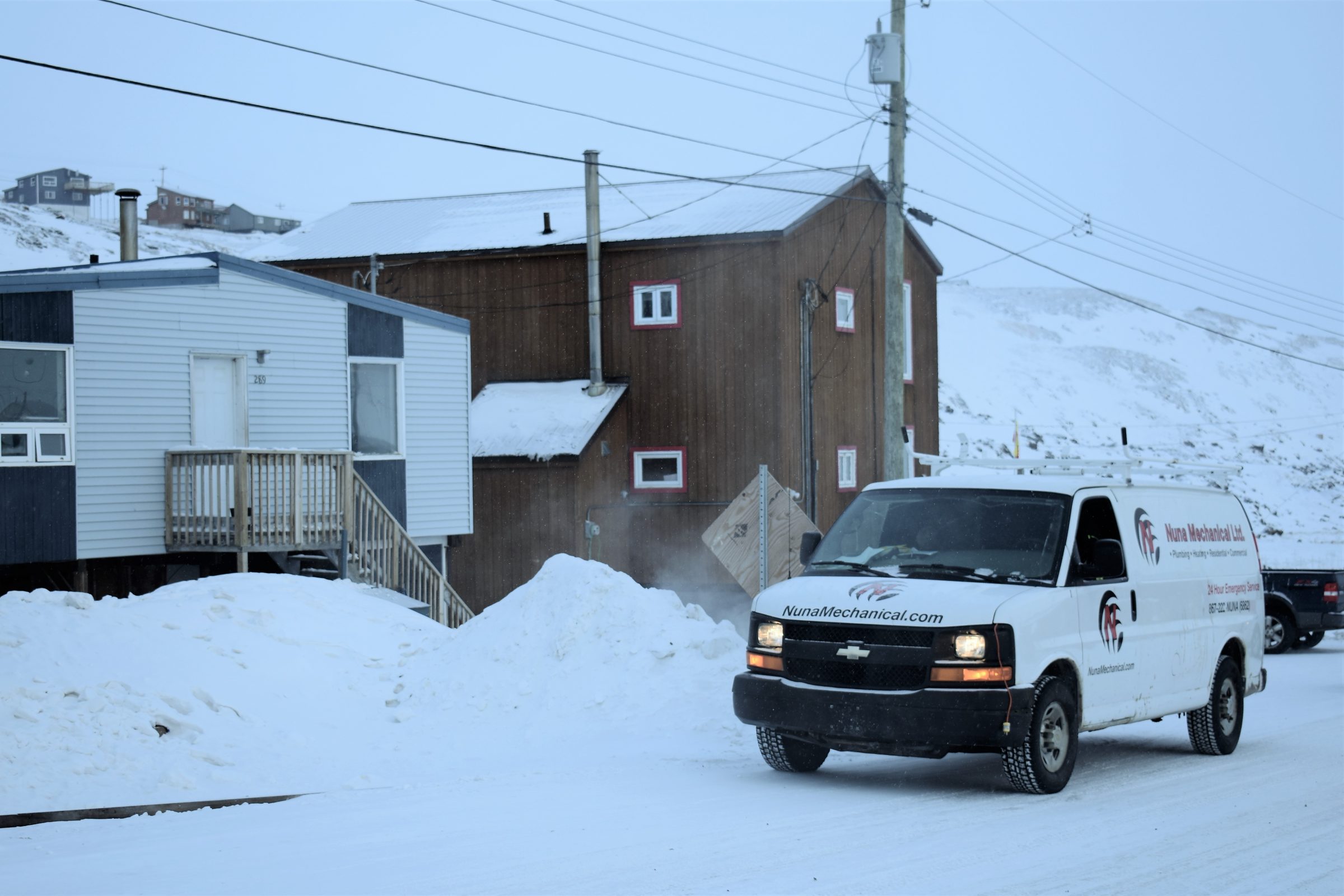 Several houses in the graveyard neighbourhood in Iqaluit have been having utilidor issues over the last few days. (Photo by Courtney Edgar)

While the City of Iqaluit solved one water infrastructure problem last week, at the Astro Hill complex, more water issues have sprung up at homes on the utilidor system on the other side of town.

Lynn Peplinski, who lives near Iqaluit’s old cemetery, had noticed that there were a lot of water shut-off advisories in her neighbourhood over the last week or so. She had heard about other homes’ utilidor systems shutting down, and intermittent water at the homes near her.

That made her worry that a larger problem may be coming, since the system requires a constant flow of water.

On Saturday, it happened—her water stopped. Her line had apparently frozen.

“This is huge,” said Peplinski.

“When our systems to keep our infrastructure from freezing break down in the Arctic, we are in trouble.”

She added that she does not think the City of Iqaluit or the city businesses it contracts have the resources to keep this situation from getting even worse.

The problem is just getting away from them, said Peplinski.

“The incredibly disheartening thing is that after the City sent us Nuna Mechanical to steam our intake line, they steamed all 150 feet to where our line connects with the utilidor, but they found the actual utilidor frozen—and they left!” said Peplinski.

“There was nothing more they could do. And they had at least five other houses to try to thaw water lines. We are facing an emergency.”

Peplinski said that it took Nuna Mechanical three hours to steam her water line on Saturday evening before they realized the issue was deeper than the line. That work needs to be done by the city, but Peplinski said the city has not yet set an appointment to fix that.

“After the city repairs and thaws the utilidor there will be multiple houses that will need their lines to be thawed quickly. But there are not enough companies to handle all the homes’ frozen lines. And now the sewage lines are starting to freeze.”

Peplinski thinks part of the problem is that the city does not have enough steaming equipment available to open up all the frozen lines.

“Time is of the essence,” said Peplinski.

“That’s why we all have circulation pumps to keep water flowing constantly between individual houses and the utilidor line. If the water doesn’t flow, it freezes.”

City asks residents to turn pumps on when water reinstated

Meanwhile, the acting chief administrative officer, Amy Elgersma, has shared on social media that the city is working to keep its water mains clear across the city.

While city workers repair a broken water line, water in the 100s, 200s and 300s will be intermittently shut off into the evening.

“As the water main is worked on, a precautionary boil water recommendation is in effect until the work is complete,” said Elgersma.

She encouraged residents to turn on heat traces to prevent freezing to service lines and to shut off water circulation pumps when the water is turned off.

“However, it is extremely important to ensure the pump is turned on once the water is reinstated,” said Elgersma.

Peplinski stayed home from work Monday to be available for any other water maintenance attempts.

On Feb. 28, water issues at the Astro Hill complex were resolved after more than three months of low pressure, intermittent water, or no water at the upper levels of the eight- and six-storey buildings.

The low pressure was solved by replacing an old transit pipe with a newer pipe threaded inside of it.

Repairs to the Astro Hill’s water main were challenging given the age of the infrastructure, location of the pipe and weather, said Elgersma.

“The original plan to remove the broken transite pipe section was complicated by a frozen section closer to the building. This section was not dug up and replaced as main electrical cables run on top of the main water line to the complex. Instead the pipe was picked and thawed, and a camera was inserted to verify. Then a slightly smaller diameter pipe was inserted through the line, with the main line acting as a sleeve, which then connected to the existing pipe fittings at the building.”

Elgersma said there were some additional challenges during the work at Astro Hill.

One was the requirement to heat the concrete thrust blocks needed to attach to the main waterline for support. So the crew built a hut or “dog house” to keep the heat in the area.