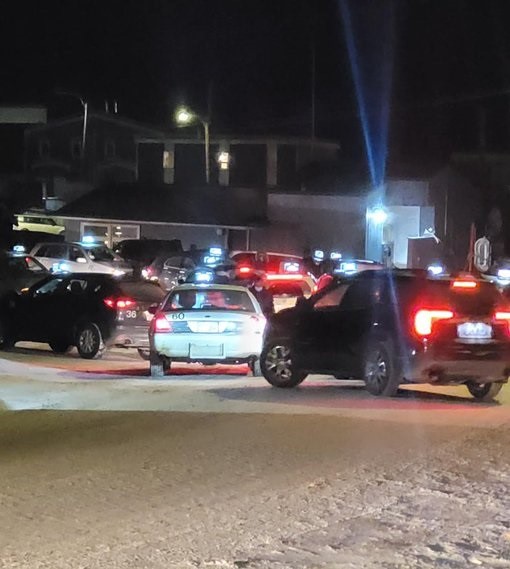 Taxis are seen surrounding the scene of a confrontation between taxi drivers and another group on Saturday night. The owner of Caribou Tuktu Cabs says if fares were collected at the start of a ride, this would avoid violent confrontations. (Photo courtesy of Kenny Bell)

Caribou Tuktu Cabs owner Danny Savard says he wants Iqaluit city council to require taxi fares to be paid up front — before the journey begins — as a way to avoid violent confrontations.

“That would solve 50 to 75 per cent of arguments between customers and drivers,” Savard said in an interview Wednesday.

RCMP are investigating several allegations of assault following a confrontation between about 15 taxi drivers and a group of people on Saturday evening.

Savard told Nunatsiaq News his understanding of some details has changed from an initial description he offered on Monday, following more discussions with taxi drivers.

He said he’s heard his driver was hit in the head with a beer can, rather than a beer bottle.

As well, he said he has heard it took the RCMP about 30 minutes to arrive, rather than 45 minutes as he was told on Monday.

The confrontation stemmed from an argument over paying for a ride that started at CIBC and ended near Hunter’s Market, Savard said. After a taxi driver was hit, as many as 15 taxi drivers arrived on the scene and a group of people supporting the customer arrived as well, he said.

On Monday, Mayor Kenny Bell said he spoke with Savard about the idea of having people pay for taxi rides up front. The mayor agreed it could be a good idea.

Bell added that taxis only accepting cash can present difficulties for customers. Savard said his company wants to install debit and credit machines, so payments can be easier.

The RCMP met with Savard to discuss Saturday’s incident, he said.

In their conversation, Savard said he and the police discussed the importance of clarifying whether the call is because of an assault or argument —as an assault will merit a quicker response.

The RCMP’s staffing challenges were also discussed, he added.

Savard said his company will work on a policy to ensure that when a driver calls for help, a smaller number of fellow drivers respond. The large number of taxi cars at the incident on Saturday delayed the RCMP from reaching the incident, he added.

Savard said he does not know whether racism played a factor in the initial incident. In September, taxi drivers stopped driving for several hours on a Saturday night to protest what they described as racially motivated attacks.

On Monday Bell said he received a video of someone yelling a racist slur at drivers once the incident had escalated.

Savard did add his drivers of colour work in other jobs, such as in government or as security, and experience racism in those settings as well.

“The racism is all over town,” Savard said.