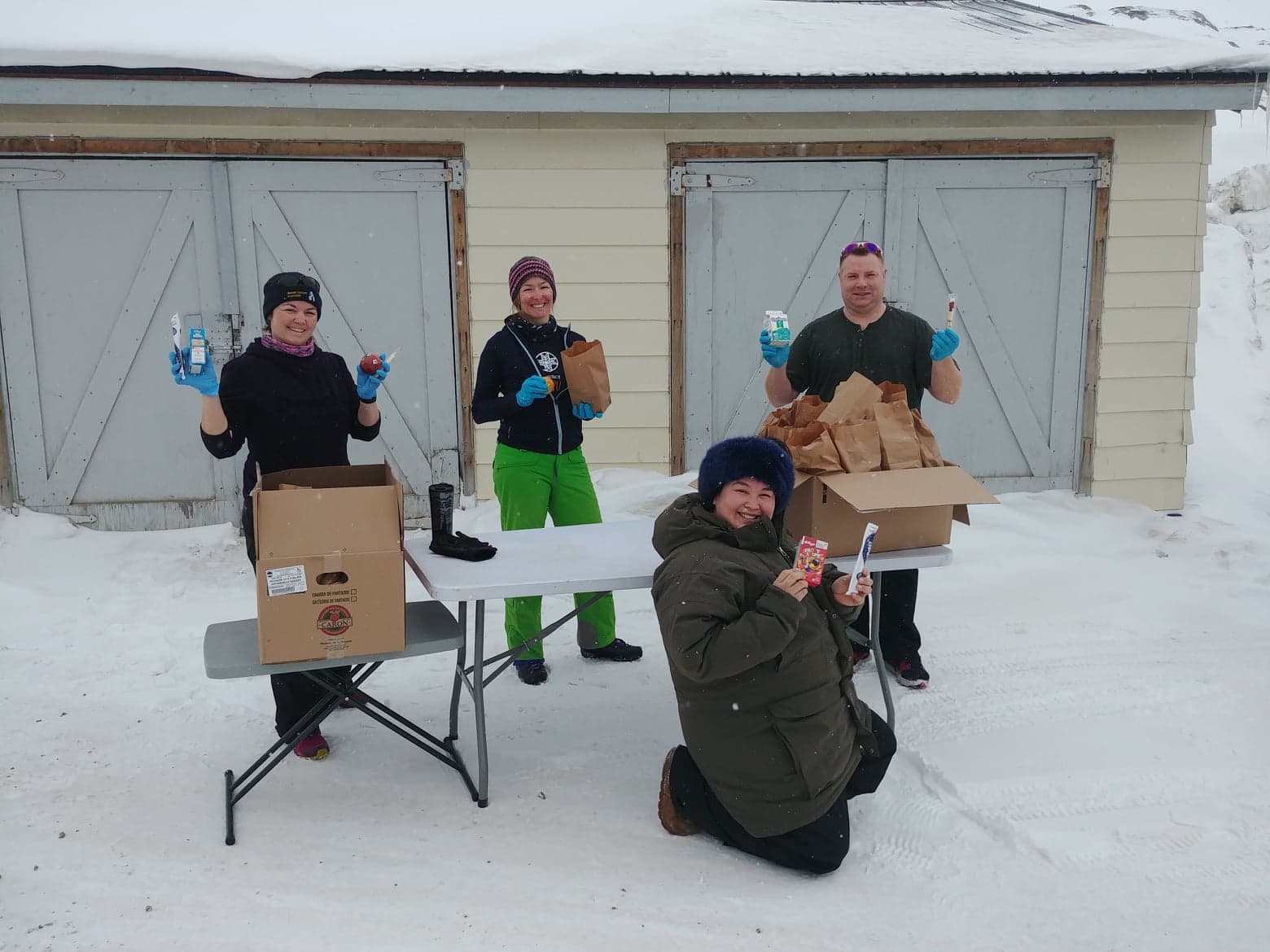 A teacher in Iqaluit is helping to make sure children are eating while school is out because of the COVID-19 pandemic.

On Thursday, March 26, Jason Rochon and three friends and fellow teachers set up a wooden table in the blowing snow behind DJ Specialties convenience store to hand out nearly 200 bags of breakfast.

Each bag contained a mini-box of cereal, milk, yogurt, cheese and a piece of fruit.

Rochon works at Joamie Ilinniarvik School in Iqaluit, where he started a breakfast program and food bank a few years back, and said he knows how much some children rely on the food they get at school.

When the Government of Nunavut shut schools across the territory on March 17 because of concerns about COVID-19, Rochon said he wanted to do something for the students at his school. But then he decided to extend it to the whole city.

“There are lots of children in the same boat, and this is the best idea I could possibly think of,” Rochon said.

Rochon immediately lobbied Nunavut Tunngavik Inc. for money. The organization wrote him a cheque for $25,000, saying they could get the money back through the Child First Initiative.

“I was really pushing the sense of urgency for this,” he said.

He used the money to order food through DJ Specialties. One of the owners, Mona Godin-Bayne, is selling it to him at cost.

He brainstormed with Neevee Wilkins, Charlene Paterson and Marsha Rhodes, his friends and fellow teachers who are helping him, on ways to safely distribute the food.

They figured a bagged breakfast was the best way to go.

“There would be as little interaction as possible,” Rochon said.

They use gloves to pack the bags, and have children line up outside and not come in the door, “so we don’t get in any kind of trouble,” he said.

Rochon posted on Facebook that bags would be available as soon as he heard the food order was in, and said he then got a call from someone working in public health with the Government of Nunavut.

On the morning of Thursday, March 26, as Rochon and his friends were packing the bags, the man from public health was also there to make sure everyone was being as safe as possible.

At the end of the first morning, a few bags were left over, but Rochon heard from people that they’re going to start spreading the word.

Donations from the community have started to roll in to Rochon.

He didn’t ask for anything, and said that at first he told people to hold off because he wasn’t sure that his idea would work. 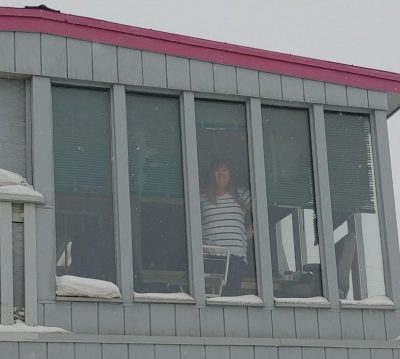 Mona Godin-Bayne seen through the window above DJ Specialties in Iqaluit. She’s keeping her distance, but she’s also doing what she can to help get food to children while school is out. (Photo by Meagan Deuling)

But people started to send him money anyway. When that happened, Rochon said, “Ugh, maybe I’ll just have to take it.”

Godin-Bayne is fielding the donations for Rochon.

“I’m not really asking, people are just stepping up,” he said.

Rochon and his three friends will run the program on Friday to work out the kinks, and after that they’ll start to take turns, with one of them leading two other volunteers each time.

They will be handing out breakfasts on weekdays only.

Rochon doesn’t know what the need is like city-wide, but he knows 260 children benefit from the breakfast program and food bank at Joamie school.

When the GN shut down schools on March 17, Rochon threw together 80 bags of food for children to take home.

“I knew some of the kids were really going to be lost without our breakfast program,” he said.

Along with the bags of breakfast, Rochon scrounged together money from his food bank budget to put together 35 food hampers. He and his three friends came up with a list of families they know will probably need them the most, and they are going to deliver them on Monday, March 30.

The GN, meanwhile, says it’s working on its own solution to help students who depend on school meal programs.

“Several GN departments are working closely together to reduce the impact school closures have on food programs,” a spokesperson wrote in an email to Nunatsiaq News.

“The GN hopes to have an update on this soon.”