‘The kids’ smiles after they get a new bike, that’s my favourite part,’ says Joseph Takpannie 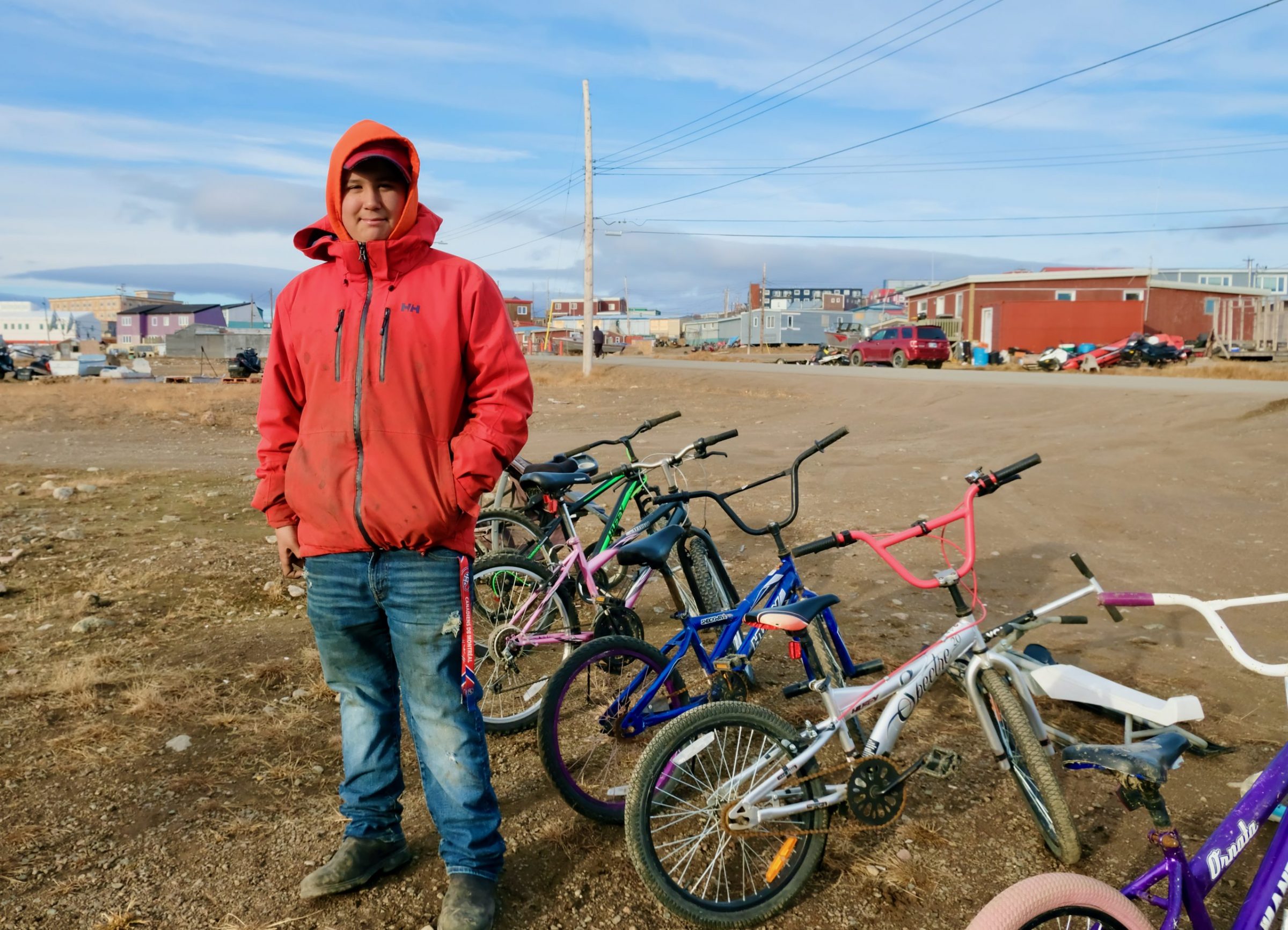 Thirteen-year-old Joseph Takpannie gathers broken bikes from Iqaluit’s landfill every Saturday to repair throughout the week and give away to local kids. (Photo by Mélanie Ritchot)

Every weekend he gathers about seven bikes, give or take, to fix up throughout the week then give away to local kids.

“I thought, ‘These kids don’t have bikes, they always fight over them, I should just fix them for them,’” Takpannie said.

To date, Takpannie guesses he’s repaired and given away about 100 bikes over three years.

Many of them just need minor repairs, like a new chain, which takes about 20 minutes to fix, he said.

Others need a bit more work, like a new derailleur — the piece that shifts the gears. 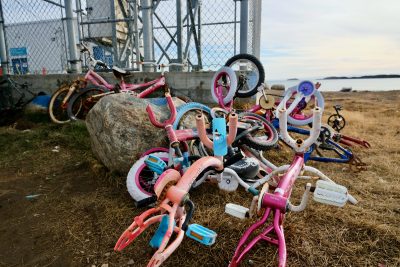 A pile of broken bikes awaits Joseph Takpannie in his backyard, ready for repairs and a new life. (Photo by Mélanie Ritchot)

Another challenge is actually getting the bikes out from the piles of garbage.

“We’ve been trying to get a certain bike for months and we can’t,” he said.

“Nothing is wrong with it, I just need to pump the front tire.”

On average, Takpannie fixes about one bike every evening after school. As he accumulates fixed bikes they are set up outside for kids and parents to claim.

“The kids’ smiles after they get a new bike, that’s my favourite part all the time,” Takpannie said.

“I just like seeing the little kids’ faces and all.”

This Wednesday afternoon’s spread included about a dozen bikes of different sizes, a stroller with new wheels and two GT toboggans donning new skis, ready for the winter season.

By the end of the day, the bikes were all claimed. 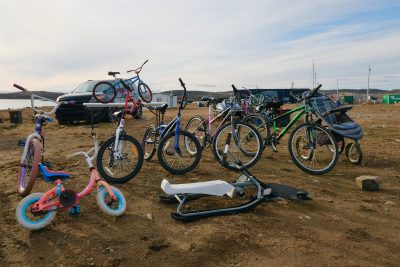 Joseph Takpannie set out bikes, a stroller, two toboggans and a scooter for kids to claim Wednesday afternoon. (Photo by Mélanie Ritchot)

“I’m usually in the backyard, I never pay attention, but by the time I go see if there’s another bike they’re all gone,” he said.

Now he’s starting to see his bikes around town. Recently when he was out giving a bike away to a child, he saw another kid riding a bike he had fixed.

“The little kid was so happy, he was giggling, and they were all biking together,” said Takpannie.

“I asked if he remembered me … and he said, ‘Yes, thank you very much, I love this bike so much.’”

Takpannie does all the repairs in his backyard, with a nearby pile of bikes waiting to be fixed up next. Despite colder weather on the way, he plans to continue. 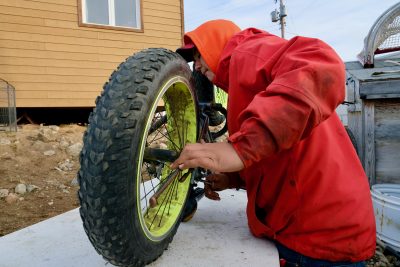 His supplies usually comes from the dump as well, with parts from different bikes making new working models. He’s even found bikes he’s fixed back at the dump.

“[Some] people just take them and break them into pieces,” he said.

Still, he does his best to fix them up again.

With some bikes needing more time-consuming repairs, Takpannie said he’s considering doing a raffle for one of the nicer bikes he’s fixed up and painted to raise money for parts.

Being completely self-taught, Takpannie learned to fix up bikes by watching mechanic shows on TV.

“[I thought] they look kind of similar to a vehicle so they don’t look too hard,” he said. “And it started to turn into a hobby.”

The aspiring mechanic said he’s looking forward to studying mechanics in school once he starts Grade 10 at Inuksuk High School next year.

“I might end up being a mechanic but I could still do cars and [bikes], these are easy.”

On Thursday morning, Takpannie received a donation of over 50 bikes from a woman in Tundra Valley who had been collecting broken bikes around town for over two years. 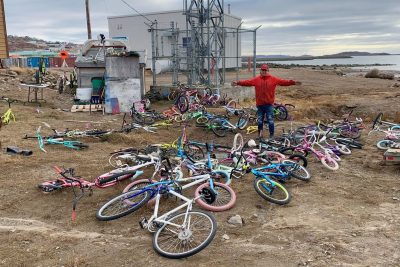 The young bike repairman now has over 50 bikes to fix up for local kids after the large donation came in on Thursday morning. (Photo courtesy of Ina Tikivik)

Now, Takpannie’s got his work cut out for him.