Katie Yu, 15, is one of 13 youth litigants from across Canada 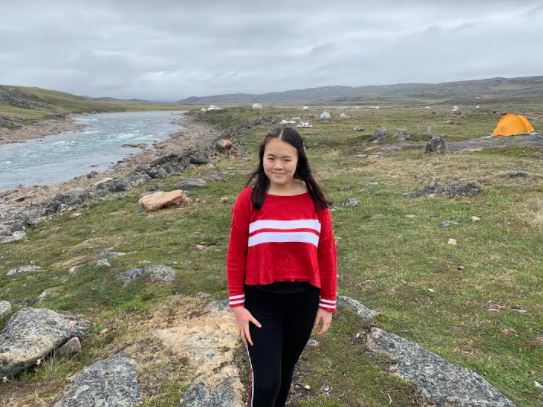 Katie Yu of Iqaluit is one of 13 litigants in a lawsuit against the federal government regarding voting age restrictions. (Photo courtesy of Katie Yu)

An Iqaluit teen is one of 13 young Canadians taking the federal government to court over the law that restricts the voting age to Canadians 18 years of age and up.

Katie Yu, a 15-year-old Grade 10 student at Inukshuk High School, says it’s unfair for young people to be excluded from elections because parliamentary decisions affect her age group in the short and long term. Among the issues, Yu says youth need to have a voice on climate change, mental health and life after the pandemic.

“We deserve to speak for ourselves on these issues because we have opinions on how these things should be addressed,” she said. “We like to think about the future and how things play out.”

The lawsuit, which has the legal support of the Ontario-based Justice for Children and Youth, claims that the Canada Elections Act is unconstitutional because it unfairly discriminates against younger voters.

The Canada Elections Act limits voting in federal elections to Canadian citizens who are at least 18 years old. However, the Charter of Rights and Freedoms does not have any restrictions on voting age.

Section 3 of the Charter states: “Every citizen of Canada has the right to vote in an election of members of the House of Commons or of a legislative assembly and to be qualified for membership therein.”

Mary Birdsell, the executive director of Justice for Children and Youth, is one of three lawyers providing legal counsel to the 13 young people. She says the 18-and-older voting restriction is an unreasonable limit on young people’s constitutional rights.

“The age of 18 is not justifiable, in terms of a restriction on voting,” Birdsell says. “The government has to provide a reasonable and demonstrable restriction.”

There have been several attempts to lower the voting age in Canada over the years on a national, provincial and territorial, and municipal level. Last month, Senator Marilou McPhedran tabled Bill S-201, which calls on lowering the federal voting age to every “person who is a Canadian citizen and is 16 years of age or older on polling day.”

Internationally, very few countries have a national voting age of 16. However, Canadians as young as 14 are eligible to become federal party members, enabling them to vote on leadership and party policy.

Despite the legislative developments, Birdsell says a lawsuit is an important step in bringing attention to the legal rights of young people at the ballot box.

“There actually is a legal right at stake here, and the courts are just one mechanism, or one avenue, for seeking change,” she said. “Change is happening and being discussed in many places and we’re just hopeful that we can add these young voices to the mix.”

One of the barriers young people face when calling for the right to vote centres around the question of whether people under the age of 18 are mature enough to vote.

“There are lots of different laws where we use age as a proxy for something that we think is important,” she said. “It’s high time that we allowed teenagers, who are held responsible for many, many things … they should be allowed to participate in our democracy.”

Yu also says that maturity should not be determined by age, and teenagers who are getting involved politically on a number of issues deserve to have their voices heard at the ballot box.

“That argument is based on an assumption because we have never had the right to vote,” she said. “When youth are given the opportunities to make change and have their voices heard, they’ll use it.”

The youth have filed the lawsuit with the Ontario Superior Court of Justice.

As the case goes before the courts, Yu says she hopes she and her fellow litigants will be successful, and the voting age will lowered.

“We have made change before, and I think when we’re given this right to vote, there will be a lot of potential benefits,” she said.