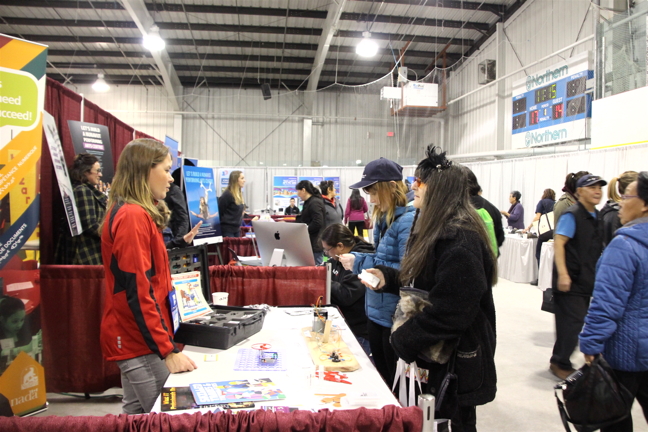 The Nunavut Trade Show, seen here in 2017, is returning to an in-person event in Iqaluit for the first time since the beginning of the COVID-19 pandemic. (File photo by Beth Brown)

The City of Iqaluit will provide support to the Nunavut Trade Show as it returns to being an in-person event for the first time since the COVID-19 pandemic began.

The Nunavut Trade Show, which is run by the Baffin Regional Chamber of Commerce, will be held at the Arctic Winter Games arena and Aqsarniit Hotel from Sept. 19 to Sept. 22.

To support the event, city council voted Tuesday to waive the fee for the chamber to use the Arctic Winter Games arena, which would have amounted to $4,032 for four days.

Council also approved providing staff for the trade show, bringing the city’s total contribution to about $5,190, according to the city’s economic development officer Geoff Byrne.

Council turned down the chamber’s request for $10,000 in sponsorship money.

Byrne said the city does not have the funds to provide that kind of financial support but added the trade show is an important event for Iqaluit and the territory, so the city wanted to support as much as it could.

“Any support we get from them, we always appreciate it,” West said.

He said other sponsors will be able to help financially and that he is excited for the trade show to return to being an in-person event.

The Nunavut Trade Show is a networking event that brings together government, the territory’s businesses, southern businesses and investors.

Typically, there are about 100 booths set up. This year, there are seven conferences planned. Registration for booths is ongoing, West said.

With all the business activity, the trade show can inject up to $600,000 into Nunavut’s economy, according to West.

Rebuilding is the theme of this year’s event, in recognition of the COVID-19 pandemic and its effect on regional business, especially tourism.

“It’s been a tough few years for everybody, both mentally and financially,” West said.

“We’re excited to get back to it.”

Correction: Chris West was improperly identified in a previous version of this story. The story has been updated to correct his name.