“For me, it’s an exciting opportunity” 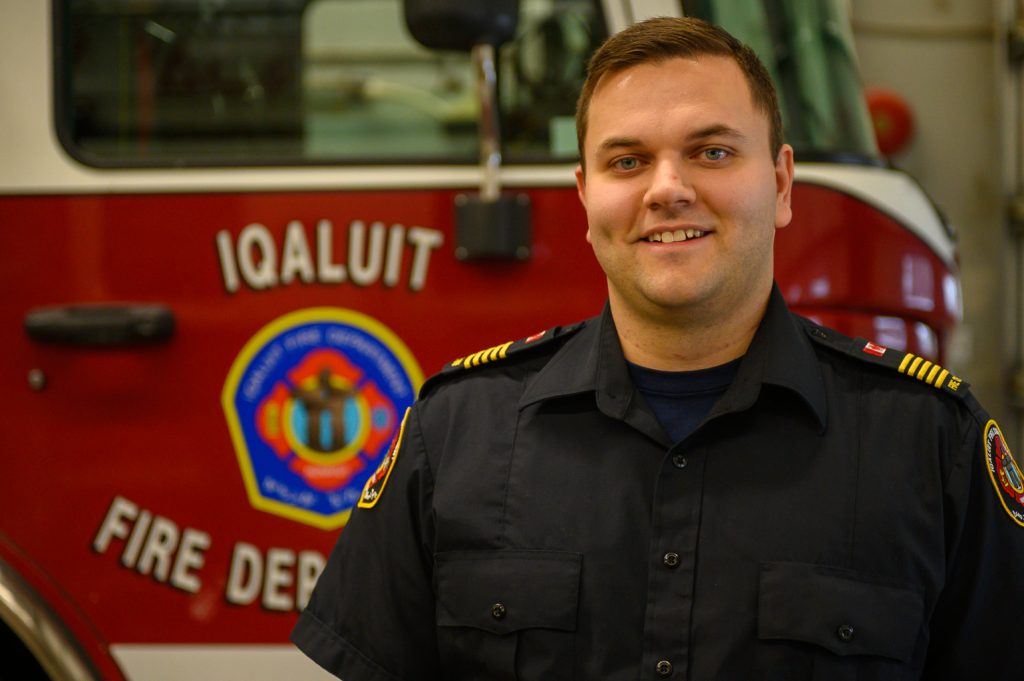 Gord Howard has been Iqaluit’s new fire chief for only about two weeks. He’s spent most of that time reading and learning as much as he can, but he says his new position offers him an opportunity he relishes. (Photo by Dustin Patar)

When Gordon Howard appeared before Iqaluit city council for the first time on Oct. 22 as the city’s newly hired fire chief, he didn’t expect one question that was thrown at him.

“I’m very much hoping that you are a Montreal Canadiens fan?” asked Coun. Joanasie Akumalik.

After several long moments of silence, Howard shook his head and responded, “Nope.”

The room broke into laughter.

A week later, during an interview with Nunatsiaq News, Howard admitted, “I felt at that point that maybe I should just keep my team to myself.”

Howard, who originally grew up in Hamilton, came to Iqaluit by way of Meaford, Ontario, a small town near Collingwood on Georgian Bay.

While it’s his first time here, he’s not a complete stranger to the North.

During a decade-long career as an emergency medical technician with the Canadian Forces, he’s spent time near Arviat living in a tent during the height of winter.

“So I understand snow, I understand cold, but that offers its own unique challenges. You know, it’s a different world up here and I think that that was kind of the draw for me to come up here. It’s an interesting department,” said Howard, referring to the fact that the Iqaluit fire department is a composite department—one that’s made up of career firefighters and volunteers.

That wasn’t all that drew Howard to Iqaluit.

In addition to the position utilizing his background in both firefighting and EMS—a rarity in most other departments—the other big draw was the prevalence of fires in Iqaluit.

“The statistics for this department are staggering,” said Howard.

“This is a busy, busy place and they’ve stayed afloat with what they have.”

The challenges facing the department, and now Howard, are nuanced, from the recurring water issues and a need for more volunteers, to problems with arson and a fire station the department has outgrown.

“It’s not going to be something that we change overnight and I don’t think anybody really wants to change anything overnight. As long as we’re moving forward and we’re not taking any steps backwards, I’ll be happy,” said Howard.

“For me, it’s an exciting opportunity. It’s exciting, all the things we’re trying to do and then building off what we already do really well.”

Going back to the first question he was asked as the city-appointed director of emergency services, “I’m a Toronto fan,” said Howard with a smile.

“Luckily some guys in the department are Toronto fans. I brought a flag, so we can hang it off the truck when they win the Stanley Cup in 20-30 years from now.”