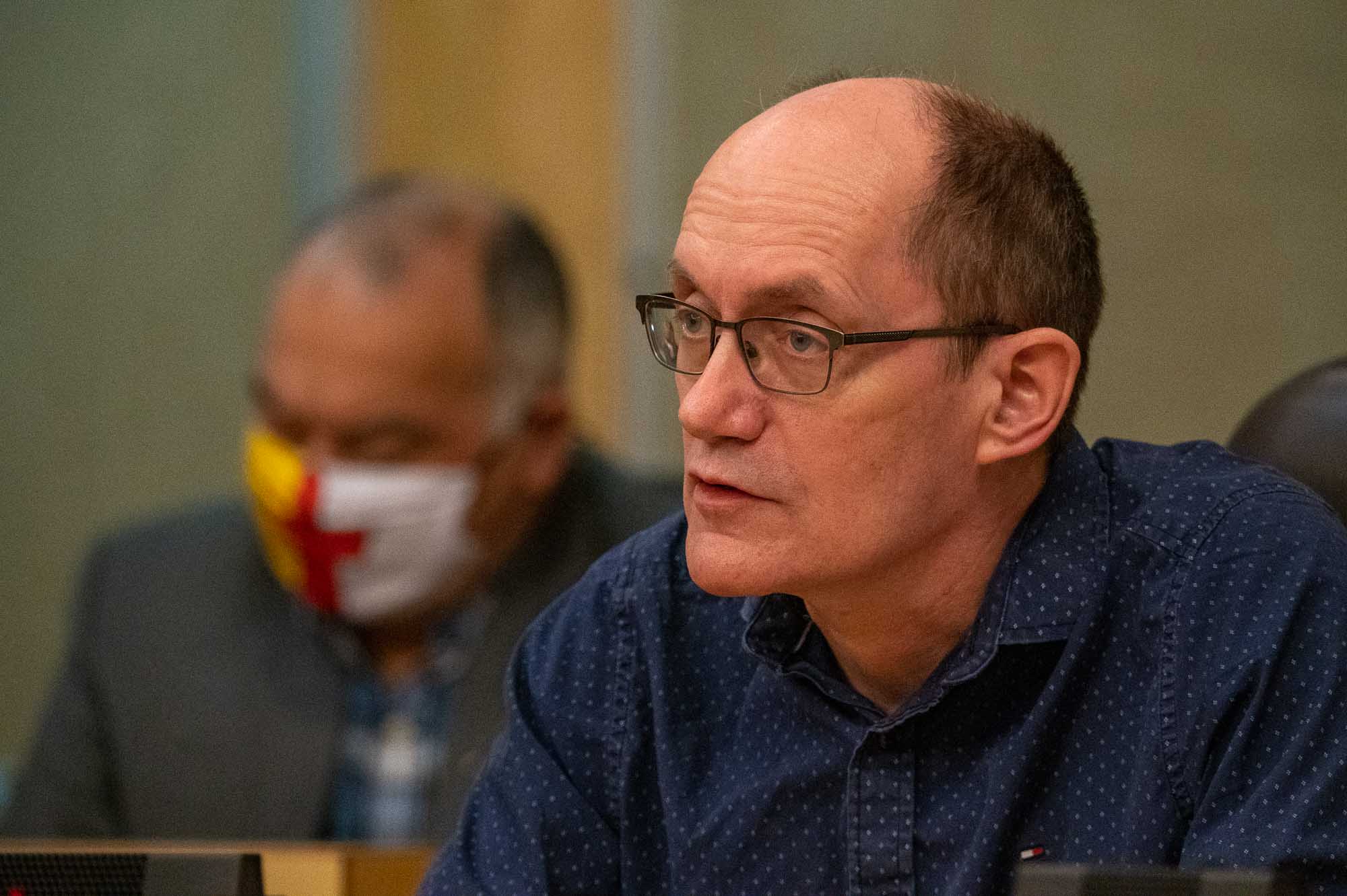 Nunavut’s chief public health officer Dr. Michael Patterson speaks during news conference Thursday where he declared a COVID-19 outbreak in Iqaluit Thursday, as the number of active cases in the capital city increased to 13. (Photo by Dustin Patar)

Iqaluit is experiencing a COVID-19 outbreak, the Government of Nunavut announced Friday.

The announcement was made during a news conference on Friday morning, after 12 new cases were reported in the community overnight, bringing the total number of infections to 13.

“It has been declared an outbreak as it involves multiple households and we have not determined the source of infection at this time,” said Dr. Michael Patterson, Nunavut’s chief public health officer.

“While this is a serious situation, it is one that we can gain control of, contain and, in time, end.”

Patterson said that all of the infected residents are now isolating in their homes.

Although some, such as the initial case, are experiencing symptoms, Patterson said others are not. Symptoms include fever, cough and difficulty breathing, among others, according to a list the Health Department published.

On Thursday, less than a day after the first case was announced, the government identified the Storehouse bar and grill as a site of “potential COVID-19 exposure” and encouraged anyone who had been to the establishment since April 8 to monitor themselves for symptoms and schedule a test if they showed any.

When asked why more specific dates and times couldn’t be given for possible exposures at the Storehouse, Patterson said that on all of those nights there was at least one person, if not more, who would have been in their infectious period and providing more details would have created confusion.

Despite this, Patterson says the outbreak still does not meet the criteria for community transmission.

“The definition of community transmission is we’re having cases pop up that we can’t establish links between,” he said.

“Right now, in Iqaluit, every individual who’s had a positive result, we know where they are on that chain of transmission.”

In addition to those who have tested positive, Patterson said that, to the best of his knowledge and prior to the news conference, there were more than 70 individuals who have been identified through contact tracing.

The city has the ability to run roughly 200 tests a day, but Patterson said that it comes with a price.

“The longer we do that, and the more we stretch that capacity, it starts to have an impact on other operations because they can only do those tests, not other tests,” he said.

Some Iqaluit residents who called the COVID-19 hotline this morning reported experiencing wait times of over an hour. Patterson said those delays were caused by technical difficulties and were being worked on.

Patterson also said that staffing for the hotline, normally one or two nurses, was increased yesterday.

The government is asking anyone who has travelled outside of Iqaluit since April 7 to immediately isolate for 14 days.

This includes participants of the recent hearing of the Nunavut Impact Review Board.

The Nunavut government also announced Friday that it would begin taking vaccine appointments for rotational workers, such as nurses and airline workers who regularly fly in and out of the territory.

The government said it has enough vaccines for rotational workers and all Nunavut residents who are 18 or older.

The government posts updated information and resources for COVID-19 on its website.

It will continue to hold news conferences next week on Monday, Wednesday and Friday at 11 a.m. eastern time.