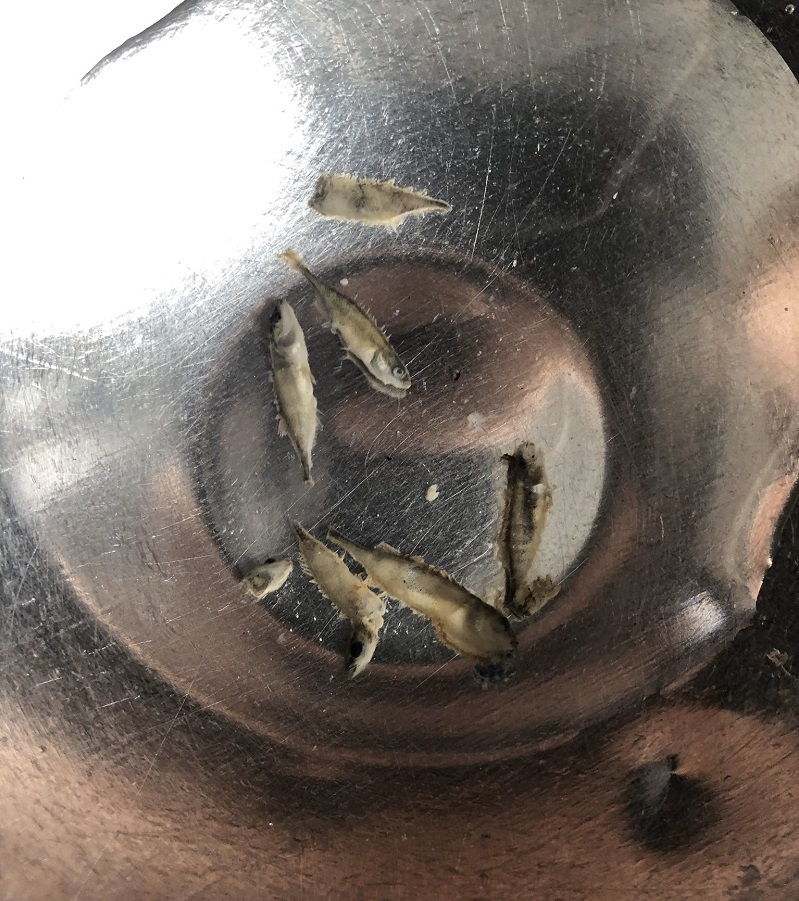 Thomassie Mangiok found these dead fish in the water tank of his home in Ivujivik. (Photo courtesy of T. Mangiok)

Thomassie Mangiok, his wife and two daughters recently made pasta in their kitchen at home in Ivujivik.

The Nunavik family was excited to tuck into the fresh meal, only to discover it tasted off.

“It tasted like fish,” Mangiok complained. “We couldn’t finish it.”

The flavour wasn’t surprising. A few days ago, he’d taken a flashlight and peered into his water tank, where he counted six dead fish.

“I’m afraid to get some type of infection,” Mangiok said, adding he worries most for his wife, who is now eight months pregnant.

“I’ve been putting some vinegar in our water tank, to reduce any chance of microbes.”

Ivujivik’s water treatment plant has been out of service since February, when its pipes and supply lines froze. Higher than usual amounts of snowfall this past winter prevented the community’s fuel truck from offloading at the facility, which left it without power.

Since then, the community government has used its two water trucks to collect freshwater from a lake outside the village. That water is then treated with chlorine and delivered directly to local homes.

The Kativik Regional Government has had a boil water alert in place since then, which means community members are advised to boil any water they plan to consume for at least one minute. But residents have also noticed the water in their tanks is yellow, flecked with particles, and in Mangiok’s case, polluted with dead fish.

Ivujivik residents are now asking the regional government for more reliable infrastructure to ensure clean drinking water for its residents.

The community has recently started circulating a petition on the change.org website, endorsed by the local municipal council, calling for “clean water in the Arctic” and asking for support to add water filtration systems to local homes.

“We wanted to create a petition to create awareness, to get KRG and other organizations to pay attention to this,” Mangiok said.

“I want a system in place to make sure that the water we drink will be safe.”

The KRG’s Municipal Public Works department has yet to receive the petition, but its director, Paul Parsons, said the department is working to get Ivujivik’s water treatment plant back up and running as soon as possible.

“It’s been a difficult winter there,” Parsons said.

“We add chlorine to the tank, and that’s been recognized as acceptable practice in these emergency kinds of situations. That’s the only treatment process until the supply line issue is solved.”

The Kativik Regional Government has sent technicians to work on the local plant, but Parsons said the solution may require waiting for the snow to melt, which in Nunavik’s northernmost community could take until mid-June.

When asked about the option of installing filtration systems in local homes, Parsons said the regional government has not considered that as a viable long-term fix.

“It is safe drinking water, once it goes through the plant,” he said. “So there’s no need to do any further filtrating at the house point.”

In the meantime, many community members, including Mangiok, have resorted to collecting fresh drinking water themselves from a nearby stream.

It has issued boil water alerts in Salluit and Aupaluk, where neither community currently has a functioning water treatment plant. Salluit’s plant has faced a similar freeze-up, while Aupaluk’s local freshwater supply recently depleted.

Other Nunavik communities, like Akulivik and Inukjuak, have seen water delivery issues over the winter related to the maintenance of their fleets of water trucks.

Keeping a flow of safe drinking water in all 14 communities is a perpetual challenge, Parsons said.

“The valuable of having potable water is huge,” he said.