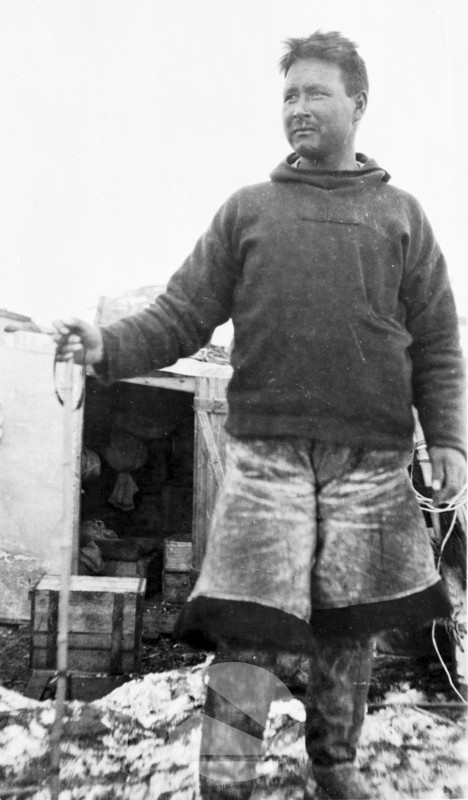 The importance of Jacob Olsen on the Fifth Thule Expedition is often overlooked.

He was the expedition’s interpreter and secretary. Unlike the six Inughuit on the expedition, who did not speak English or Danish, Olsen, a Kalaaleq from central west Greenland, spoke Kalaallisut (West Greenlandic) and Danish.

The Inughuit spoke Inuktun, a dialect of the “Eskimo” language that is related to Kalaallisut and all Canadian Inuktitut dialects. Knud Rasmussen spoke Inuktun and Kalaallisut, as well as Danish and English. Peter Freuchen spoke Danish, English and Inuktun. The three other Danes did not speak Inuktun or Kalaallisut.

The Aivilingmiut and Iglulingmiut who interacted with the expedition at Danish Island referred to the Inughuit as Akukittut — the people with short tails on their parkas. They had heard of such people on trading trips north to Pond Inlet. That word today is used, generally with a “-miut” suffix – Akukitturmiut – for all Greenlanders. But Jacob Olsen was different. He was a Kalaaleq, and the people of Melville Peninsula had no knowledge of West Greenlanders.

Olsen’s father, Samuel Olsen, was the chief catechist in Sisimiut (then Holsteinsborg). Jacob’s older brother, Gustav, was a close friend of Knud Rasmussen and had been the first missionary in the Thule district. Another brother Julius worked as a catechist among the Inuit of East Greenland.

Jacob was born on Nov. 22, 1890. After graduating from the seminarium in Nuukt, he took up duties at Qeqertarsuaq (then Godhavn). He was, moreover, a skilled dog driver and proficient in the use of the kayak. He was a natural for the expedition, and in the summer of 1921, Knud Rasmussen recruited him.

Olsen, who was labouring at the village of Ujarasugssuk had just three hours to think about Rasmussen’s offer. He accepted, and left his family in Qeqertarsuaq where they would remain during his absence.

In the early days of the expedition, Olsen made a number of trips from Danish Island to Repulse Bay (now Naujaat), where there was a Hudson’s Bay Company post with a small Inuit community nearby.

In the spring of 1922 he travelled to Chesterfield Inlet with ethnographer Kaj Birket-Smith. Olsen remained there while Birket-Smith continued on to Baker Lake.

At Chesterfield he availed himself of the hospitality and knowledge of Inuktitut-speaking trader Solomon Ford. He also spent considerable time at the Roman Catholic mission, and got to know its founder, Father Arsène Turquetil, and a young priest, Lionel Ducharme.

In addition to his work as an assistant to the Danish scientists, Olsen preached the gospel to the Inuit he met, both at the expedition’s headquarters and on his various trips.

This was a time of religious upheaval in the Naujaat area. Influences from the Catholic mission at Chesterfield moved north at about the same time as the Inuit prophet Umik arrived from the Pond Inlet area with his peculiar version of Christianity. Into the mix came Jacob Olsen, a man with six years of theological training under his belt, speaking a dialect of the Inuktitut language, and with an interest in proselytizing.

In an interview in 1990, the well-known Inuit Anglican minister Noah Nashook said, “My first introduction to Christianity as a young boy took place near Naujaat from preachers from Greenland who had arrived by ship. I was so young I don’t remember my reaction.”

Although not mentioned by name, Olsen is the only member of the expedition who might have been described as a preacher.

Of the six Inughuit, one, the young woman Aqattaq, had been baptized in Thule; the rest were baptized in Nuuk the day before leaving for Canada, all having attended baptismal preparations for the three years previous. But there is no indication that they proselytized.

Olsen kept a detailed diary in Greenlandic in which he recorded the songs and customs of the Inuit, as well as notes on his work in archeology and the collection of artifacts.

One man whom he met at Chesterfield Inlet and mentioned by name, was Pilakapsi. Olsen talked to him quite forcefully about Christianity, and eventually Pilakapsi said he wanted to hear more. Because Olsen was leaving shortly, he referred him to Father Turquetil.

Another of the Danes, Helge Bangsted, wrote in his diary, “They [the Catholic fathers] very much want Jacob to go over to Catholicism and become a catechist here. ‘But I will not do so,’ said Jacob.”

In his own writings, Olsen noted that the Catholic priests had made overtures to him on three separate occasions.

Peter Freuchen wrote about Olsen that he was too busy casting his seed amongst the Inuit to bother with any preaching. But this accusation is suspect – Freuchen had made similar aspersions, in almost the same words, against a West Greenlandic missionary in Thule. It may just be Freuchen taking an opportunity to show his well-known dislike of missionaries.

The Canadian Inuit called Olsen Jaaku — in Greenland he was known as Jaakunnguaq. He admired the Inuit, got on well with them, and praised them for their kindness, friendliness, helpfulness and hardiness.

He particularly admired the Aivilingmiut for their snow house building — their skills and their speed. He marvelled at a multi-domed snow house complex he saw at Mattuq (Bury Cove), which housed four families. He even took notes on the calls used to direct the dogs in a team, and compared them to the calls used in Greenland.

Greenlandic scholar Robert Petersen summed up the man: “He was physically strong and skilled in all kinds of sports, and he was also endowed with a good sense of humour. He could in many areas prove himself among the Aivilingmiut and be accepted.”

The Aivilingmiut had given up the art of kayaking, but Jaaku had brought his kayak with him and demonstrated its use to them. They remembered it three decades later when they told Petersen how impressed they were at seeing Jaaku roll his kayak.

By contrast, the inland Inuit had retained the use of their kayaks for use on lakes. Knud Rasmussen wanted to show them how Greenlanders roll a kayak, but failed to realize that the Caribou Inuit kayak is not meant for such feats. He found himself in a dangerous predicament — upside down in an unfamiliar kayak.

Olsen was critical of the syllabic writing system that Inuit in the eastern Canadian Arctic had recently adopted. He wrote sarcastically, “[The characters] are very well suited to what they are supposed to do! They are not able to show the words as they are. Thus there are many possibilities for misunderstandings. How, in fact, should one show the pronunciations of the syllables?”

Robert Petersen, writing about Olsen and editorializing on the subject, summed it up this way: “It is practical to learn, but impractical to use.”

Next installment — more on Jacob Olsen