“I would love to have done this stuff” 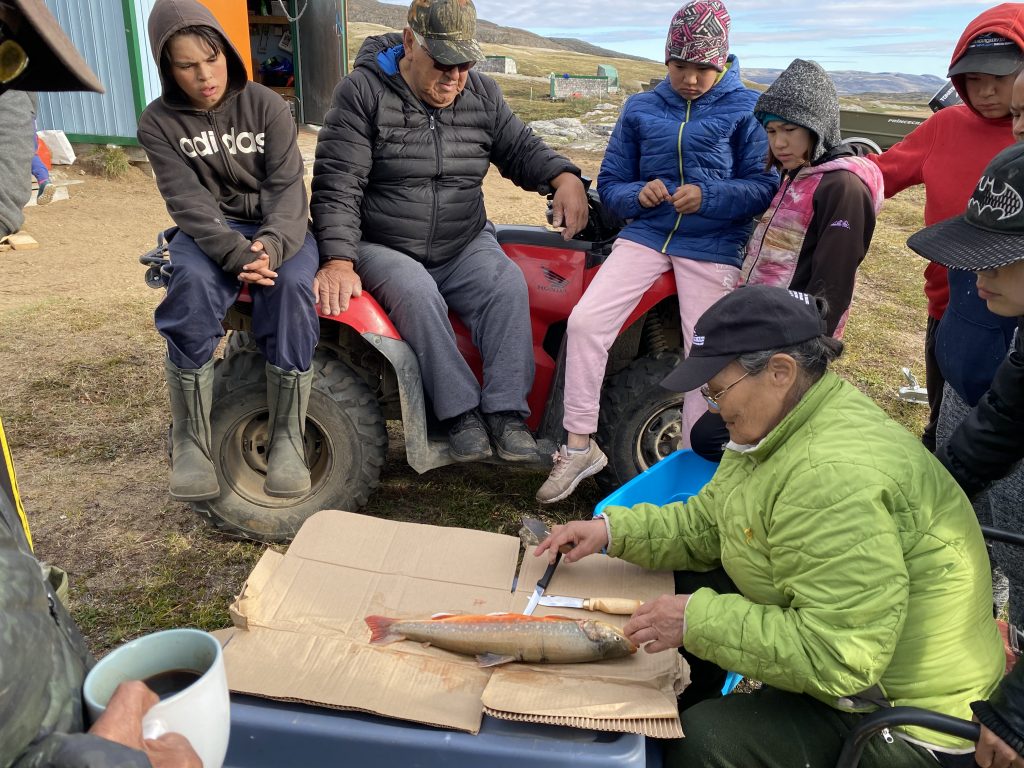 Elder Akulukuk Judea fillets an Arctic char, while explaining to students at a traditional knowledge camp in Katannilik Territorial Park in late August about fish anatomy and the uses of the various parts of the fish. (Photo courtesy of Caroline Ipeelie-Qiatsuk/Nunavut Parks and Special Places)

A group of young teens in Kimmirut had the opportunity in late August to leave their community and their school behind and spend five days camping in Katannilik Territorial Park.

The camp is an annual event, dating back to the 1990s.

This year’s camp was set up and managed by Nunavut Parks and Special Places, and co-ordinated with the local school, but Caroline Ipeelie-Qiatsuk, who is a heritage appreciation regional co-ordinator with Nunavut Parks, said it was six elders from the community who provided all the instruction, in Inuktitut, to the 15 youth who attended the camp.

The goal of the Katannilik IQ science camp was for the elders to transmit their Inuit Qaujimajatuqangit or Inuit traditional knowledge, which Ipeelie-Qiatsuk said really turned into learning life skills.

“Unintentionally, this … became a life skills, a way of life kind of thing, with the elders leading the camp the whole time.“

The elders explained to the teens about using their observations to read the weather and how to identify which plants are edible and which ones can be used for traditional health remedies to deal with colds, cuts and burns.

The teens also learned about setting nets, fish anatomy and which parts to use, navigation on the water and on land, and lighting and tending a qulliq, starting with learning which plants to use to make a wick.

When asked by Nunatsiaq News if she had participated in a camp like this as a youth in Iqaluit, Ipeelie-Qiatsuk said that she had attended a spring camp for a night or two, where they learned “more European types of science, western science versus traditional science.”

“I would love to have done this stuff,” she added.

She said that the Grade 7 and 8 students travelled to the park, which is four to five kilometres from the community, by boat and then by ATV, which for some was a new experience in itself.

“Not a lot of kids have the opportunity to go out … to even get to the park in their own community, just because it’s not accessible for everybody.”

“[The kids] got a lot of time to connect with nature, the elders … and they got to camp, they got to spend time with kids, like their peers. They seemed really happy. They got to fish in the Soper Falls.

“They really seemed to have enjoyed it because when Friday came, they were, like, I don’t want to go back home. Can we stay?”

Ipeelie-Qiatsuk said this camp usually runs in August, but following the shutdown because of COVID-19, school started a week earlier this year, so they needed the school’s permission to take the students out.

She added that there’s talk of providing a similar camp in other seasons.

“We’re trying to expand. There’s talks about a seasonal camp happening in the winter or spring, just because there are so much more other things you can learn aside from the summer activities … like how to survive in the wintertime.”