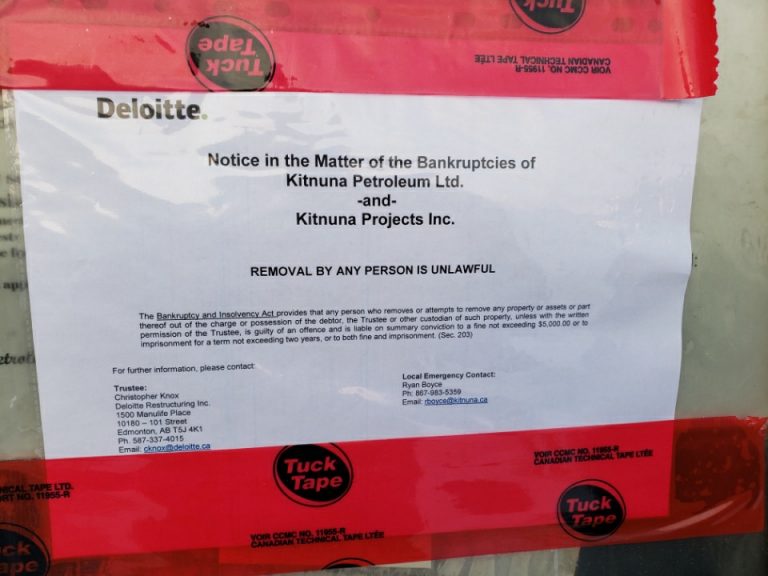 Creditors in western Nunavut who are still smarting over money owed to them by two bankrupt companies, Kitnuna Projects and Kitnuna Petroleum, could not learn much from a recent Kitikmeot Corp. update on the bankruptcies.

The two companies, which declared bankruptcy last November, together owed more than $10 million to a long list of creditors, including local businesses, when they closed.

The update on the bankruptcies was included in a report presented on Tuesday, Oct. 6, by KC’s president David Omilgoitok and by John Stevenson, its chief operating officer, to the Kitikmeot Inuit Association’s annual general meeting in Cambridge Bay.

“As some delegates will recall from my report last year, we were having a serious look at restructuring the Kitnuna Group of Companies, which were all in financial trouble. As result of that work, two companies, Kitnuna Petroleum and Kitnuna Projects, have been put into bankruptcy,” the report said.

The two companies were subsidiaries of KC, the wholly owned business arm of the KIA.

And their bankruptcies last November left many in the Kitikmeot region with big unpaid bills.

One of those owed money, who spoke to Nunatsiaq News on the condition of anonymity, said they don’t understand how the KC management is still in place while all employees of the two subsidiaries lost their jobs.

“There need to be some serious repercussions, but none have occurred to date. Where … does this happen other than with these birthright entities? People are alarmed, but are afraid to speak up,” the creditor said.

No figures or information were provided at the AGM on the impact of these bankruptcies or what took place afterwards in terms of a settlement with the creditors.

KC has said it only discloses financial information to its sole shareholder, the KIA, at their first meeting of every calendar year.

The two KC companies made an assignment into bankruptcy on Nov. 4, 2019.

Online documents from Deloitte Restructuring Inc., the licensed insolvency trustee, show that Kitnuna Petroleum had assets of about $9 million, but owed about $8.7 million, mainly to the Government of Nunavut and the Qulliq Power Corp.

Many western Nunavut companies were also on the list of creditors owed money by Kitnuna Projects: Inukshuk Enterprises, JMS Supplies, Kalvik Enterprises and the Ikaluktutiak Co-op, to mention a few.

Deloitte has not responded to Nunatsiaq News’ requests for additional information on how or if the creditors were repaid.

By filing for bankruptcy, the two Kitnuna companies were also able to stop unsecured creditors from taking legal action against them and stop any actions already in place.

This protection, called a “stay of proceedings,” is provided by section 69 of the Bankruptcy and Insolvency Act.

KC provided no figures on how its active subsidiaries are now doing in its report to the annual meeting, and no $100,000-dividend cheques were handed out to the KIA, as was done in 2015.

The KC report did say, “Every one of our 25 or so companies has been impacted by COVID-19.”

Both Larga patient boarding homes in Yellowknife and Edmonton were “significantly impacted” by COVID-19, it said, due to the “immediate stoppage of non-emergency patients traveling for medical appointments.”

“Even though we managed to access some funding to offset loss of income for employees, both businesses have been deeply impacted by COVID-19 financially. All that said, both of our Larga homes continue to operate in a safe and efficient manner.”

The full report can be found on the KIA Facebook page.