Business woes were no secret in Cambridge Bay 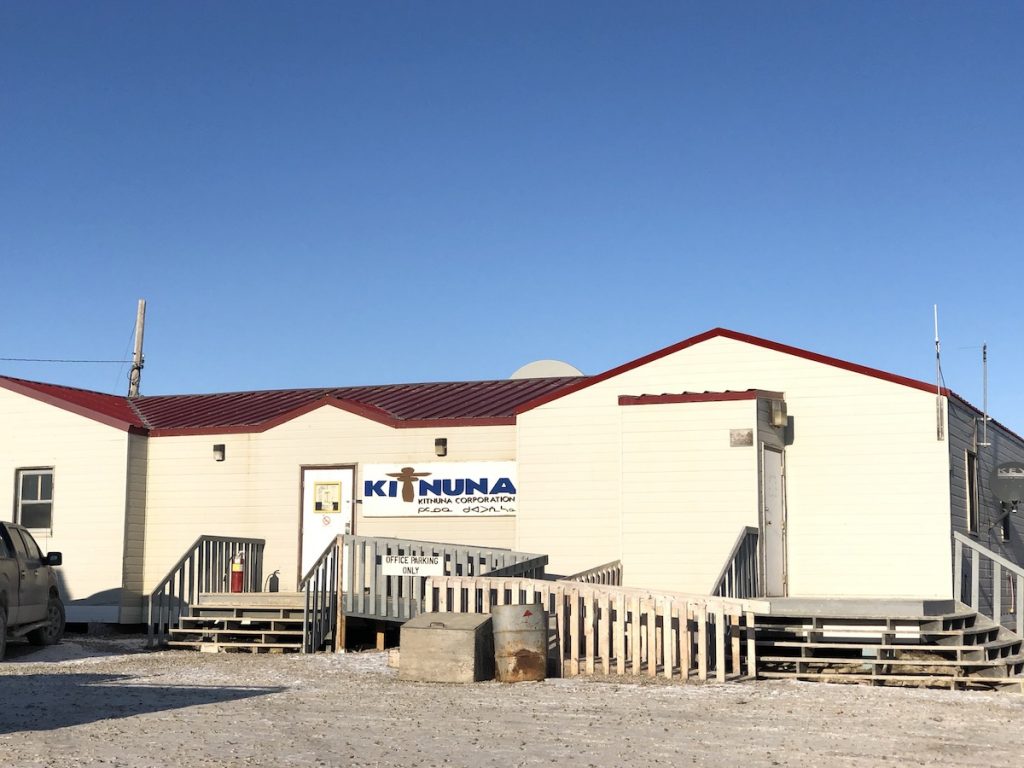 Employees of two of Kitnuna Corp.’s subsidiaries in Cambridge Bay, some of whom worked in this office, all received notice by last week that they were being laid off. This move took place in advance of the Nov. 4 declaration of bankruptcy by Kitnuna Petroleum Ltd. and Kitnuna Projects Inc. (Photo by Jane George)

A sign posted on the Kitnuna Corp. building provided an official notice of the bankruptcies in the western Nunavut hub, where many of its roughly 1,800 residents already knew the Inuit-owned companies were in big trouble. 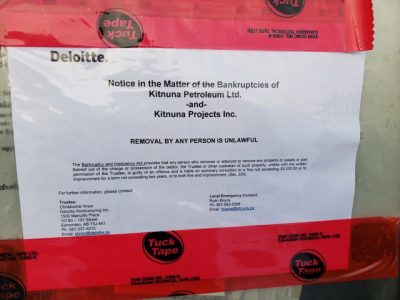 This sign posted on the Kitnuna Corp. building in Cambridge Bay is the official public notice that Kitnuna Petroleum Ltd. and Kitnuna Projects Inc. have declared bankruptcy. (Submitted photo)

All the companies’ employees had already been laid off.

But by filing for bankruptcy, the two Kitnuna companies can now stop unsecured creditors from taking legal action against them and stops any actions already in place.

Formally, this is called a “stay of proceedings,” and this protection is provided by section 69 of the Bankruptcy & Insolvency Act.

The two companies are subsidiaries of Kitnuna Corp., which is wholly owned by the Kitikmeot Inuit Association’s business arm, Kitikmeot Corp.

“Following years of being the sole provider of fuel to the community, which included storage, distribution and account management, Kitnuna Petroleum was unable to recover from the loss of revenue that resulted from the GN’s decision to assume this service in 2016,” Sinclair said in an email.

As for Kitnuna Projects, Sinclair said that “following years of reduced revenues and increasing costs, it could no longer generate the profits necessary to service its obligations to its suppliers, shareholder and creditors.”

The two companies made an assignment in bankruptcy on Nov. 4.

Kitnuna Expediting (known locally as Kitty Supplies) “is not affected by these closures and will remain open for business,” Sinclair said.

Online documents from Deloitte Restructuring Inc., which is acting as the licensed insolvency trustee, show that Kitnuna Petroleum has assets of about $9 million, but owes about $8.7 million, mainly to the Government of Nunavut and the Qulliq Power Corp.

Many western Nunavut companies are also on the list of creditors owed money by Kitnuna Projects: Inukshuk Enterprises, JMS Supplies, Kalvik Enterprises and the Ikaluktutiak Co-op, to mention a few.

Those who are owed money by either of the two companies will have to register with Deloitte so they can attend creditors meetings. The meetings are scheduled to take place on Nov. 25 at the Explorer Hotel in Yellowknife, at 1 p.m. for Kitnuna Products and 2 p.m. for Kitnuna Petroleum.

Kitnuna Corp. was originally a 50-50 joint venture between Nunasi Corp. and Kitikmeot businesses until Nunasi transferred its shares to Kitikmeot Corp. in 2015.

Then Kitikmeot Corp. became the sole owner of Kitnuna Corp., which managed a handful of subsidiary companies, including the two that have declared bankruptcy.

At the KIA’s annual general meeting last month in Cambridge Bay, no financials were presented for Kitikmeot Corp. or Kitnuna Corp., leaving beneficiaries in the dark about how much money may had been spent to keep Kitnuna afloat.

Kitikmeot Corp. president David Omilgoitok told the AGM that “in early 2017 we recognized that Kitnuna was struggling to address growing business challenges.”

“We made the decision to replace its management team and begin a restructuring effort that continues to this day,” he said. “Some of these restructuring decisions are now becoming apparent to the Cambridge Bay community, as certain unprofitable lines of businesses have been wound down.”

That’s all Omilgoitok said he could say.

Kitnuna Projects has been based in Cambridge Bay for the last 15 years and is one of the largest private employers in the Kitikmeot region, the Kitnuna Corp. website says.

“KPI is involved in all aspects of life in the North. General contracting, civil construction, vertical construction, concrete supply, residential repair,” it said.

Kitnuna Petroleum has “proudly served the community of Cambridge Bay since the 1960s,” the website said.

“By providing fuel to the residents of Cambridge Bay; KPL ensures that some of the hardship of living in remote, Northern communities is lessened. KPL also supplies fuel to the commercial airlines which provide regular service to Cambridge Bay and other isolated communities; as well as insuring dedicated medical transport planes are always fuelled and can leave at a moment’s notice.”