Hall honours Adjun, known as the ‘fiddler of the Arctic,’ who died in December 2021 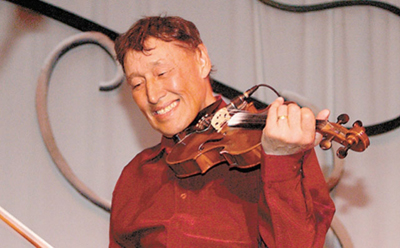 The Hamlet of Kugluktuk has renamed its community hall for Colin Adjun, pictured here in this file photo from 2014. Adjun, also known as ‘the fiddler of the Arctic,’ died in December 2021. (File photo)

Kugluktuk has renamed its community hall after Colin Adjun, honouring the ‘fiddler of the Arctic’ who died in December 2021. 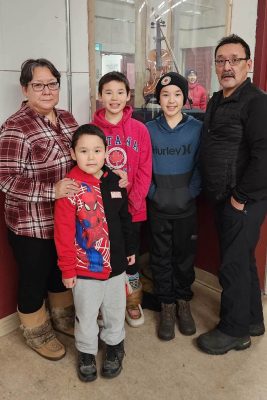 Larry Adjun, right, and his family were part of the ceremony to rename the Kugluktuk community hall as the Colin Adjun Hall. He said renaming the hall for his father “means a great deal to myself as the oldest child and for the family in general.” (Photo courtesy of Larry Adjun)

A celebration of the renaming was held in the hamlet Dec. 3, with Adjun’s family and community members in attendance. It included a jigging contest, square dancing and refreshments.

Mayor Simon Kuliktana said the community chose to rename the hall for Adjun because “Colin was one of those individuals that have made an impact.”

“He was a rare person and he made a lot of connections through his fiddling music,” Kuliktana said. “He has made a big impact in our community, but also society as a whole.”

Adjun’s youngest child, Ellie Adjun, was part of the celebration and said “it means the world to me to have the Hamlet of Kugluktuk rename the hall the Colin Adjun Hall.”

“This is his legacy and he has created our own culture and tradition in jigging and square dancing,” she said in an email.

“Kugluktuk is known for the Red River Jig! He deserves this recognition for the countless hours he committed to the community in making people celebrate and be happy.”

Adjun’s son, Larry Adjun, also attended the celebration and said the renaming “means a great deal to myself as the oldest child and for the family in general.

Kugluktuk Mayor Simon Kuliktana presented the key to the community to the Adjun family at a Dec. 3 celebration in the community. It honours the ‘fiddler of the Arctic,’ Colin Adjun, who died in December 2021. (Photo courtesy of Larry Adjun)

“It’s great that we have this recognition of what he’s done for the community throughout his whole lifespan here.”

Colin Adjun showed promise as a musician at a young age. In a 2002 interview, he told Nunatsiaq News he was born “with music in my head” and first learned to play the fiddle when he was a young boy living out on the land.

“My two uncles [Charlie Avakana and John Kuneyuk] played the fiddle, and they taught me when we were living in the outpost camp,” Adjun said at the time.

Over the years, he played at many community celebrations, special events and music festivals from coast to coast.

A sign sits above the door of the community hall in Kugluktuk, which has been renamed for Colin Adjun, who was known for his fiddle music. Recognizing his music and the legacy he leaves behind, Mayor Simon Kuliktana said the hamlet council felt renaming the community hall was the “least we could do.” (Photo courtesy of Larry Adjun)

He released three albums over the course of his career: Fiddler of the Arctic, his first album in 1981, followed by Dusty the Leader and Beluga Waters.

Recognizing his music and the legacy he leaves behind, Kuliktana said the hamlet council felt renaming the community hall for Adjun was the “least we could do.”

“Because of him, our community is well known for people that love to square dance, and through his music he created a love for dance.”

Ellie Adjun said she hopes “the community will continue to use this space for sharing and coming together as they celebrate life!

“Many meetings, dances and weddings to keep our community together. We will remember Dad through Gustin, my younger brother who will continue his tradition in playing the fiddle for the community of Kugluktuk.”