“You can do anything with music” 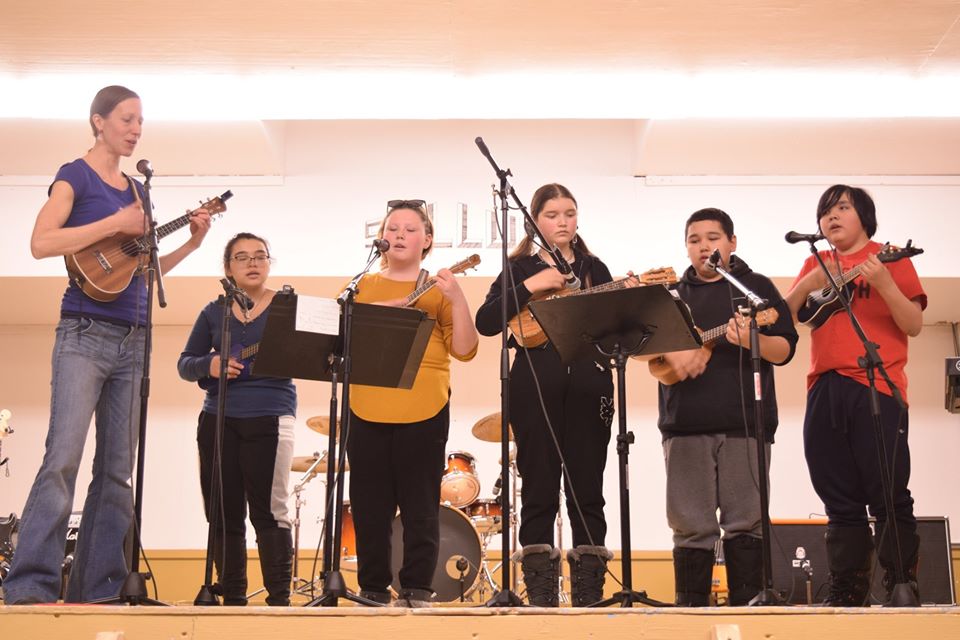 The ukulele club from Kuujjuaq’s Jaanimmarik School perform on stage in Salluit alongside their instructor Sarah Russell. (Photo by Tommy Gordon)

KUUJJUAQ—The members of Kuujjuaq’s ukulele club carry binders packed with sheet music. The young musicians have nine performance-ready songs, to which audiences in several Nunavik communities have been treated.

When Nunatsiaq News spoke to the group, which is made up of Grade 6 and 7 students at Jaanimmarik School, on Feb. 27, they were headed to Salluit the coming week and then to Kangirsuk right after.

But they’re used to the travelling show.

The hotel in Kangiqsualujjuaq “was so nice,” says Aiva Lingard, a Grade 7 student who, along with Christina Lock, have been in the club since it started two years ago.

And just before Christmas, the troupe performed at the Pigunnaniq Festival in Kuujjuaraapik, hosted by arts education organization YouthFusion. They played ‘You are my sunshine’ and were brought back up onstage to play alongside the Iqaluit musician, Aasiva. (The ukulele is also her instrument of choice.) 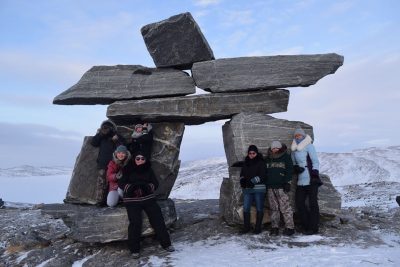 The group plans to travel to Iqaluit next school year, hopefully to perform with Aasiva again.

Each of the students are working on different challenges or skills in the club beyond plucking their four-stringed instruments, like overcoming shyness and learning to accept change.

The two boys in the group, Anthony Watt Lariviere and Linus Onalik, both in Grade 6, are working on singing along more with the group, explains instructor Sarah Russell. And the whole group sounds better when they do, the others agree.

“Whenever the boys sing, I get more hyper, more happy,” says Kayla Lefebvre, a Grade 7 student.

When the group picks up their instruments, Russell happily exclaims, “You’re singing,” to the boys, who are quickly making gains in their challenge.

Everyone here learned to play only once they joined the club.

Niivi Snowball, a Grade 7 student, says she already had a ukulele when she joined, but only really started playing with the group. She says her guitar-playing father helps her out, as he can quickly pick up the chords.

Once Lingard joined the club, she says she got a call from her grandfather one day telling her to come over because he had something for her. A bright blue ukulele was waiting for her. “I didn’t expect it,” she says.

Some students have their own ukuleles, while others borrow. A generous donation from the community helped the club purchase better-quality ukulele cases, which are needed with the club often “on the road.”

The club’s trips are possible thanks to generous grants from the federal New Paths for Education program and ESUMA, which both gave the project $25,000.

For the different songs in the club’s repertoire, the members will hop on different instruments when needed. Lock has been playing piano for five years and accompanies the ukuleles on keyboard for a few songs. Both Lingard and Watt Lariviere play drums in others, and Watt Lariviere and Onalik play Inuit drums for another.

Halfway through the practice, Russell stops the group just to say how happy she is to see everyone taking their place without being told.

The song of the moment is ‘Ring of Fire’ by Johnny Cash; Lock is on the keyboard, Lingard is on the drums and the others are in a semicircle around Russell, also strumming a ukulele. Everyone knows what to do.

In the communities and at home in Kuujjuaq, the club performs for younger students and elders.

In Salluit, they’ll play for the Kindergarten to Grade 4 students and host a workshop on playing the ukulele. Then they’ll play for Grades 5 and 6, and a community concert. They also bring local musicians from each community up to play with them.

But the group says playing for older classes is more nerve-wracking.

Russell broaches the subject, saying, “maybe we could play for Secondary 4 and 5,” receiving a quick and concerted response of “no, no, no,” from the students. They giggle nervously at the prospect of performing in front of the older students.

They have performed before for an older class in Kuujjuaq, and Russell explains it went well and was appreciated by the group. “You’re trying to graduate, and it’s hard,” she says. The show was a lighter part of their day, she says.

Jonathan Nassak, a 22-year-old former Jaanimarek student who was to chaperone the Salluit trip, agrees with Russell that he definitely would have appreciated something like that back in his final years of school.

The group starts to come around a bit to the idea.

“I’m trying to bridge secondary and elementary because you can do that with music,” Russell says. “You can do anything with music.”