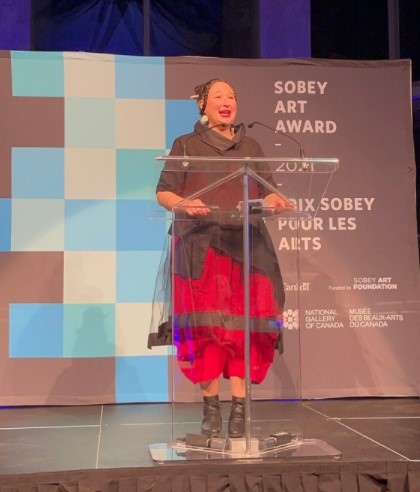 Laakkuluk Williamson Bathory, an Inuk artist based in Iqaluit, is the winner of the 2021 Sobey Art Award and its $100,000 prize.

The winner of the annual award for emerging artists in Canada was announced at a gala event at the National Gallery of Canada in Ottawa Saturday night.

“Her works invite us to share in a world abundant with possibility infused with the interconnections of land, family, community and cultural knowledge. “

Williamson Bathory was one of five artists who made the shortlist for the award earlier this year, which is funded by the Sobey Art Foundation.

Williamsom Bathory told Nunatsiaq News in an interview last week she was “humbled” at being included among the five finalists and that honour was “something I never imagined that I would be a part of.”

Much of Williamson Bathory’s multimedia art is inspired by her Greenlandic Inuit culture. Notably, her installation piece “Nannuppugut!” which translates to, “We’ve killed a polar bear!” is made from the hide of a polar bear she hunted at a cabin in Nunavut. That piece is on display until February at the National Gallery of Canada.

The four other finalists — Lorna Bauer, Rémi Belliveau, Gabi Dao, and Rajni Perera — each receive $25,000 from the award foundation, the release states.