Late Nunavut artist’s work to be featured in travelling exhibit

Kenojuak Ashevak: Life and Legacy will tour six cities in 2020 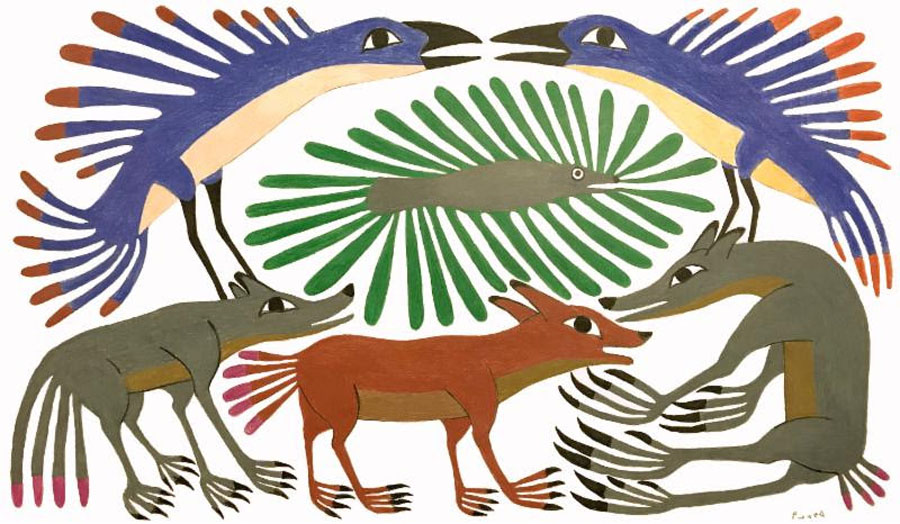 The federal government is launching a travelling exhibit featuring the work of one of Nunavut’s most iconic artists, Kenojuak Ashevak.

The prints and drawings of the late Cape Dorset artist will be the focus of this new national art tour, called Kenojuak Ashevak: Life and Legacy, which is set to travel to six regional centres across Canada in early 2020.

“As president of the Kinngait Arts Foundation and someone who knew Kenojuak very well, I am honoured to announce this important partnership with Canadian Heritage,” said foundation president Jimmy Manning in a May 22 release.

Ashevak was born in 1927 at a camp called Ikerrasak before settling with her family in nearby Cape Dorset.

It was there that she joined the first group of modern Inuit artists introduced to printmaking in the 1950s at the then newly established West Baffin Eskimo Co-operative.

Ashevak’s prints quickly took on a style and life of their own—many of them depicting coloured Arctic animals, particularly birds.

In 1960, the co-op released her famous print, The Enchanted Owl, which has gone on to be one of the most recognizable pieces of Inuit art in the country.

Now as part of the Life and Legacy tour, Canadians will get to see 31 of Ashevak’s prints and some never-before-seen drawings from the archives of the West Baffin Eskimo Co-operative.

The exhibit, which marks the co-op’s 60th anniversary, is funded through the federal government’s Museums Assistance Program.

The Kinngait Arts Foundation will soon announce the schedule and locations of the tour.