“This is an extremely important tool” 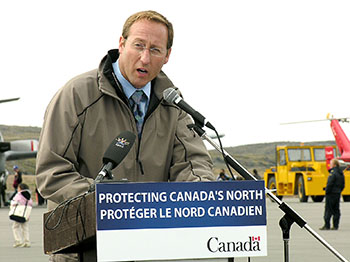 Peter Mackay, the defence minister, used the Iqaluit International Air Show this past weekend to brag about a new, specially-equipped aircraft that’s designed to detect polluters in Canada’s waters.

“This is an extremely important tool to track and identify polluters and gather information for prosecution,” Mackay told a large crowd of Iqaluit residents assembled on the Iqaluit runway apron that lies behind the Federal Building.

The aircraft, a Bombardier Dash-7 operated by Transport Canada, carries $5 million worth of high-tech gadgets designed to help its six-person crew find and track vessels spilling fuel and other pollutants into Arctic waters.

They include a special type of radar — called “side-looking” — that works in the dark or when the ocean’s surface is covered by low clouds, and an electronic identification device that can identify vessels and track their voyages.

It’s also equipped with an infrared camera and special digital still and video cameras for use in gathering evidence for prosecutions, as well as a satellite communications system that the crew uses to transmit data to authorities on the ground.

“We believe in a strong federal presence here in the North,” Mackay said, adding that the new aircraft, and others like it, will help Canada better enforce the Arctic Waters Pollution Prevention Act.

First passed in 1970, that law makes it illegal for ships to dump liquid or solid waste into the waters of the Canadian Arctic and compels polluters to notify the Canadian government if they allow an oil spill to occur.

On Aug. 1, amendments to the Arctic waters law, passed by Parliament earlier this year, came into force.

The biggest change extends Canada’s jurisdiction over its coastal waters up to 200 nautical miles, or about 320 km, offshore.

This brings Canada’s ocean jurisdiction into line with the UN Convention on the Law of the Sea, which grants economic and environmental rights up to a 320 km offshore limit.

In one case, a ship owner in Nova Scotia paid an $80,000 fine for dumping fuel into the sea illegally.

“This type of prosecution sends a strong signal to would-be polluters. We are going to make sure that this signal is going to be sent out in the Arctic as well with this Dash-7,” MacKay said.

The Dash-7 on display at the Iqaluit International Air Show last weekend will provide surveillance in the Arctic during the summer shipping season.

When winter arrives, Transport Canada will use it for surveillance work over the Great Lakes.

Another aircraft, a Dash-8 based in Vancouver, patrols the west coast while another Dash-8, based in Moncton, N.B., patrols the east coast.

But speaking later to reporters, MacKay sidestepped a question of when a dedicated search and rescue aircraft would be permanently stationed in the North.

“The rescue component obviously will be augmented in the future by fixed-wing search and rescue,” MacKay said, without giving specifics.