“Rest easy, my friend. You will be missed by us all” 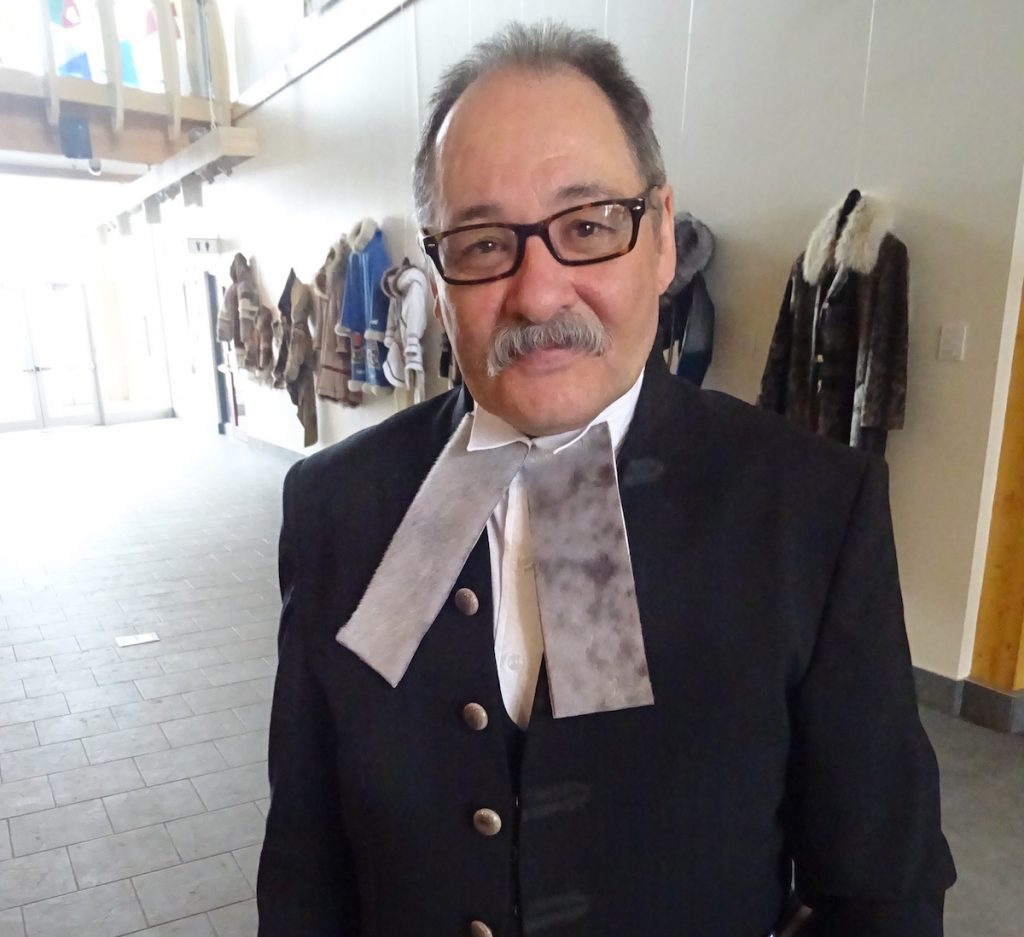 Last spring, Nunavut Speaker Joe Enook stood in the foyer of the Nunavut legislature wearing an outfit with some new touches: a sealskin tie and caribou-bone buttons. Enook, 61, died March 29 in an Ottawa hospital. (PHOTO BY JANE GEORGE)

After a short illness, Enook, 61, died Friday, March 29, at an Ottawa hospital.

By the side of the legislative building, another flag also stands at half-mast, that of the Hamlet of Pond Inlet, the community Enook had represented as MLA since winning the seat in a 2011 by-election. 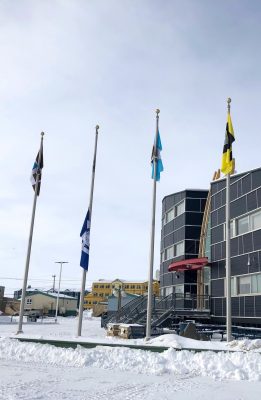 The flag of the Hamlet of Pond Inlet outside the Nunavut legislature now flies at half-mast following the death of the community’s MLA, Joe Enook. The flags of the legislative assembly in the Northwest Territories in Yellowknife have been half-masted to honour Enook.(Photo by Jane George)

Enook was acclaimed as speaker on Nov. 17, 2017, just before the opening of Nunavut’s fifth legislative assembly.

From then on, Enook became a familiar figure to many in Nunavut and beyond who watched the proceedings of the legislature online and on television.

As speaker, during a period which brought numerous legislative upheavals, Enook was a serene figure, who kept order in the chamber.

He navigated the censure of a cabinet member and a non-confidence motion for the premier as well as the election of a new premier and cabinet last June.

While many in Nunavut watched, Enook, as speaker, greeted everyone in Inuktitut with a “welcome to your legislative assembly.”

Asked during the spring of 2018 how he managed to remain so calm, Enook said he had served on many boards and with so many organizations, that this experience gave him a clear idea idea of how a speaker should behave.

Prior to Enook’s first election to the legislative assembly in 2011, he had served as the Nunasi Corp.’s vice-president of Nunavut operations from 2000 to 2011.

Enook previously worked as executive assistant to the president of Nunavut Tunngavik Inc. from 1994 to 2000.

Enook also served as chair of the Baffin Divisional Board of Education and as a member of the Pond Inlet Education Council.

Enook was re-elected to represent Tununiq for a third time in the general election of  Oct. 30, 2017.

During the previous legislative assembly, he had served as the deputy speaker and chair of the committee of the whole.

For a period in 2014, Enook also found himself representing two constituencies after the expulsion of former Uqqummiut MLA Samuel Nuqingaq.

As an MLA, Enook was vocal, raising issues that went beyond his constituency, such as the need for more housing and better infrastructure.

In 2015, a shortage of sewage collection trucks in Pond Inlet saw hamlet officials declare a state of emergency after they found themselves down to only one operating sewage truck to serve the community of about 1,500 people.

That left some houses with overflowing sewage, and some without running water because once a sewage tank is full, the water shuts off.

Speaking in the legislature, Enook said old equipment and infrastructure could put Pond Inlet—and other Nunavut communities—into dire straits in the future.

“I would like to encourage the government … to work with our community to have a long-term plan to make sure our community infrastructure is new, so that this won’t be experienced by other communities in Nunavut,” Enook said.

On Saturday, on news of Enook’s death on the previous evening,  many, including Iqaluit Mayor Madeleine Redfern and Northern Affairs Minister Dominic LeBlanc, expressed condolences to his family on social media.

Premier Joe Savikataaq said he “had the honour of serving with Joe for a number of years and can attest to his commitment and dedication to the well-being of our territory. Rest easy, my friend. You will be missed by us all.”

“Our thoughts are with Joe’s family and the entire community of Pond Inlet.”The Qikiqtani Inuit Association’s president P. J. Akeeagok sent out a statement of condolences to Enook’s family, saying “Joe was a fierce defender of the interests of his constituents, working tirelessly on initiatives that secured opportunit ies and jobs for Inuit in Pond Inlet. His passing is a loss to all Nunavut Inuit, particularly the community of Pond Inlet.”

The President of the Inuit Circumpolar Council-Canada, Monica Ell-Kanayuk, who served with Enook in the legislature said “Joe brought a sense of great calm to the Nunavut legislature.”

“It was an honour to serve with him for many years. His dedication to our language was evident as he spoke Inuktitut in the legislature.”

Gracious as always, Enook said his final words in the legislature March 12, at the end of long spring sitting, thanking  everyone involved with the sitting, from the legislative staff and interpreters to the pages.

“As we prepare to go to our home communities, I hope that we have safe travels and last but not least, our biggest gratitude to our spouses, who have provided continuous support to us,” he said.

“To our relatives whom we miss dearly, our children and grandchildren, as well as the residents of our communities, thank you for your continued support to us. Please be aware that we want to work hard in representing you.”