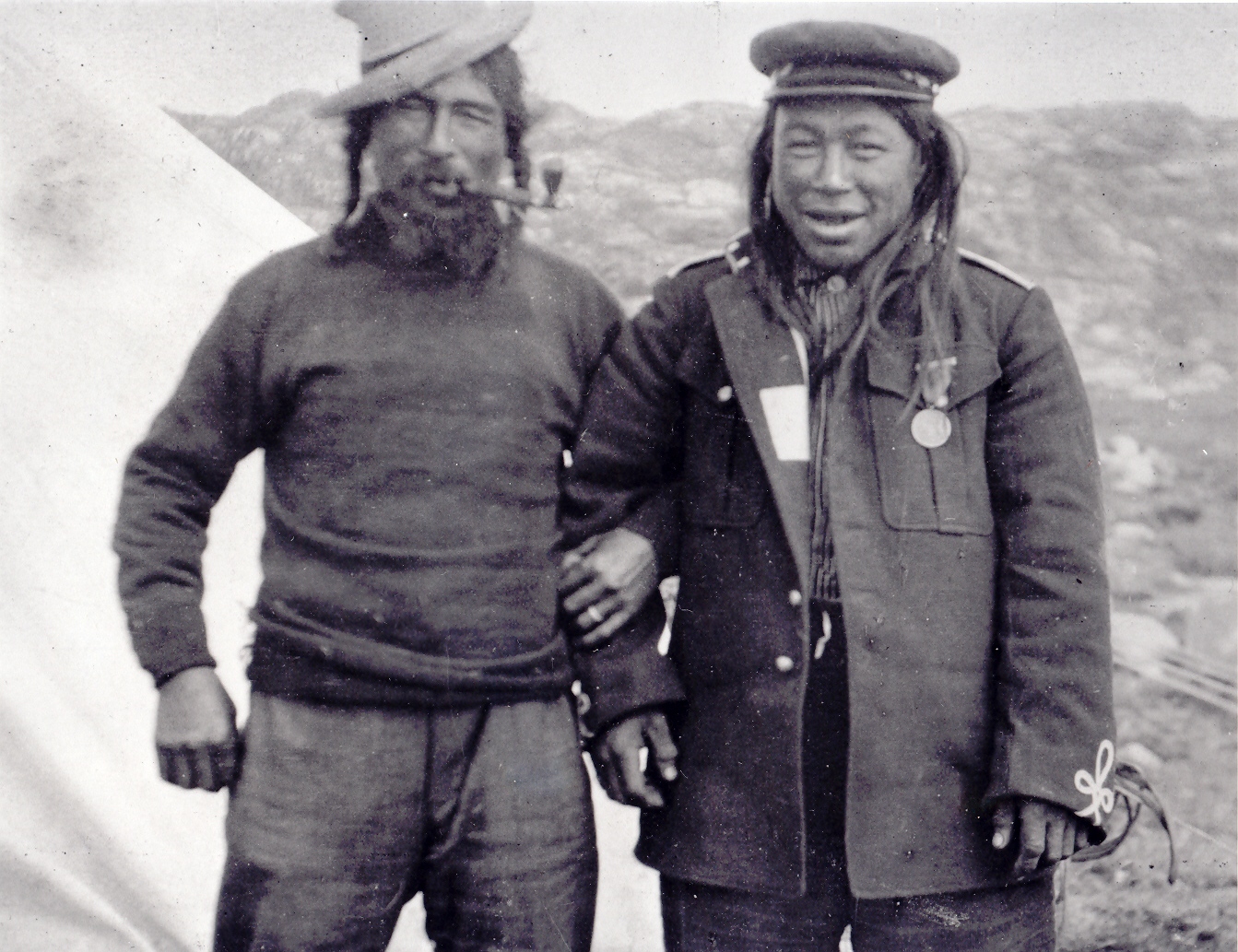 Aullanaaq, who transported Mathiassen and Olsen to Southampton Island in 1922, on the right, is photographed with another man identified as Qitloq. (Photo by Peter Freuchen, courtesy of National Museum of Denmark, M531)

He was accompanied by Peter Freuchen, Aaqqioq, and Poorsimaat. This would be a longer visit — its goal was the archeological work for which Mathiassen had been trained at university, and which interested him far more than the largely cartographic work of his earlier Baffin trip.

Freuchen and the two Inughuit left him at Repulse Bay, where he put up in the Hudson’s Bay Company house with manager George Cleveland, while they continued on to the Wager Bay area for another visit with trader Jean Berthie, also in the employ of the HBC.

Spring hunting occupied most of the Inuit at Repulse Bay, and Mathiassen was unable to hire help, so he worked alone. On June 24 he sent a letter to Freuchen, who was already back at Danish Island, asking him to send Jacob Olsen to help him. Olsen arrived on July 8. But he had cut his finger before he left the expedition’s headquarters, and it was badly infected. This rendered him of little use in helping with the archeology. He was, however, able to hunt and cook.

On July 20 the two moved into a tent, and the following day Cleveland left with his winter’s haul of fox pelts for Chesterfield Inlet to await the HBC supply ship.

At Naujaat, Mathiassen excavated 12 house ruins, 60 square metres of a large midden, and 50 graves. He collected 3,000 artifacts, which were taken back to Denmark. Two more house ruins were excavated at nearby Aivilik.

In mid-August, Mathiassen and Olsen took passage with Aullanaaq, whom whalers had called John Ell, to Duke of York Bay on Southampton Island, where Aullanaaq left them with his mother Siusarnaq — known to Inuit usually by her aqausiq name Niviatsarnaq and to earlier whalers by the name Shoofly — and her husband Angutimmarik, a former whaler who had worked in earlier times for Scottish whalers who called him Scotch Tom.

The visit to Southampton Island was meant to be short. They excavated 11 house ruins in Duke of York Bay from Aug. 20 until Sept. 6. Aullanaaq had returned on Sept. 2, intending to take them directly to Danish Island, but the ice had already formed in Frozen Strait. And so the plan was changed — he would take them back to Repulse Bay. But that plan was thwarted by a gale which caused them to return to their camp on Sept. 13, when they made the decision to winter.

It promised to be an unpleasant winter. They were low on supplies: two kilograms each of sugar, flour and oatmeal, three kilograms of canned pemmican, two packets of tea, one kilogram of coffee, half a packet of mustard, and a little salt.

They had just over one litre of petroleum and 30 boxes of matches. Fortunately they had a good supply of tobacco — 140 slabs of the popular Cavendish.

Jacob Olsen had his gun but only 30 rifle cartridges and the same number of shot cartridges. Mathiassen had left his gun at Repulse Bay because he had no ammunition. Not expecting to winter, they had not brought their winter clothing with them; instead they had woollen clothes and each man had a pair of sealskin pants. It wasn’t much, but, wrote Mathiassen, “the Eskimos promised to help with food and winter clothing as much as they could.”

But the Inuit were also short of ammunition.

On Oct. 4, with all their meat gone, the entire camp moved inland to a large lake, which Olsen named Hansine Lake after his wife back in Greenland. They lived there in skin tents and later snow houses.

At the end of the month they moved farther inland to a region with caribou, to a camp they named Darkness Lake. There were only six families on the island and they were all in this one winter camp. Olsen hunted with the Inuit as long as his ammo lasted. Mathiassen, with neither a gun or ammunition, spent most of his time in camp.

Years later, Joe Curley, adopted son of Angutimmarik, recalled, “They were poor. They were poor like little orphan boys.”

For both men, this sojourn at Darkness Lake was “dreary and insecure.”

Food was scarce, but even worse, relations with the Inuit had gradually become less friendly. Their tea and tobacco, both good forms of payment in the days of barter, were gone. They could only “pay with nothing but promises” of what they would provide once safely back at Danish Island.

That wasn’t enough because unfortunately they had also broken some taboos. In fact, Mathiassen recorded their transgressions in his own words: “[We] had excavated ancient ruins, hammered stone samples out of the rocks, smashed caribou skulls with a hammer in order to eat the brain, etc., and when some of the Eskimos became sick, the shamans worked it out that the two strangers were the cause of it.”

One night while the camp members were travelling, she suffered from a headache and convinced herself that her pains would not subside unless Angutimmarik killed the two strangers. Jacob Olsen overheard her imploring her husband to commit the deed and was able to prevent it.

Later, around the time of New Year’s, they moved in with Makik “who was more kindly disposed towards them.”

Then an epidemic of sore throat broke out. Mathiassen himself became seriously ill. Makik began to doubt the wisdom of housing the two.

One day a gun went off unexpectedly in the snow house, and the bullet made six holes in the folds of Mathiassen’s inner coat, but he was unscathed. It was an accident, but it was nonetheless a close call. That was on Feb. 5.

That same day Aullanaaq arrived, sent by Knud Rasmussen to rescue his men. But before he could begin the homeward journey, he needed to hunt for dog food. Mathiassen, Olsen, and their rescuer finally reached Blæsebælgen, their headquarters on Danish Island, on Feb. 21, where Rasmussen hosted a huge feast to celebrate their arrival.

Mathiassen afterwards claimed that he had appreciated the experience, although it had been difficult, because “he had lived on terms of intimacy with the Eskimos that otherwise would have been impossible.”

He had learned much.