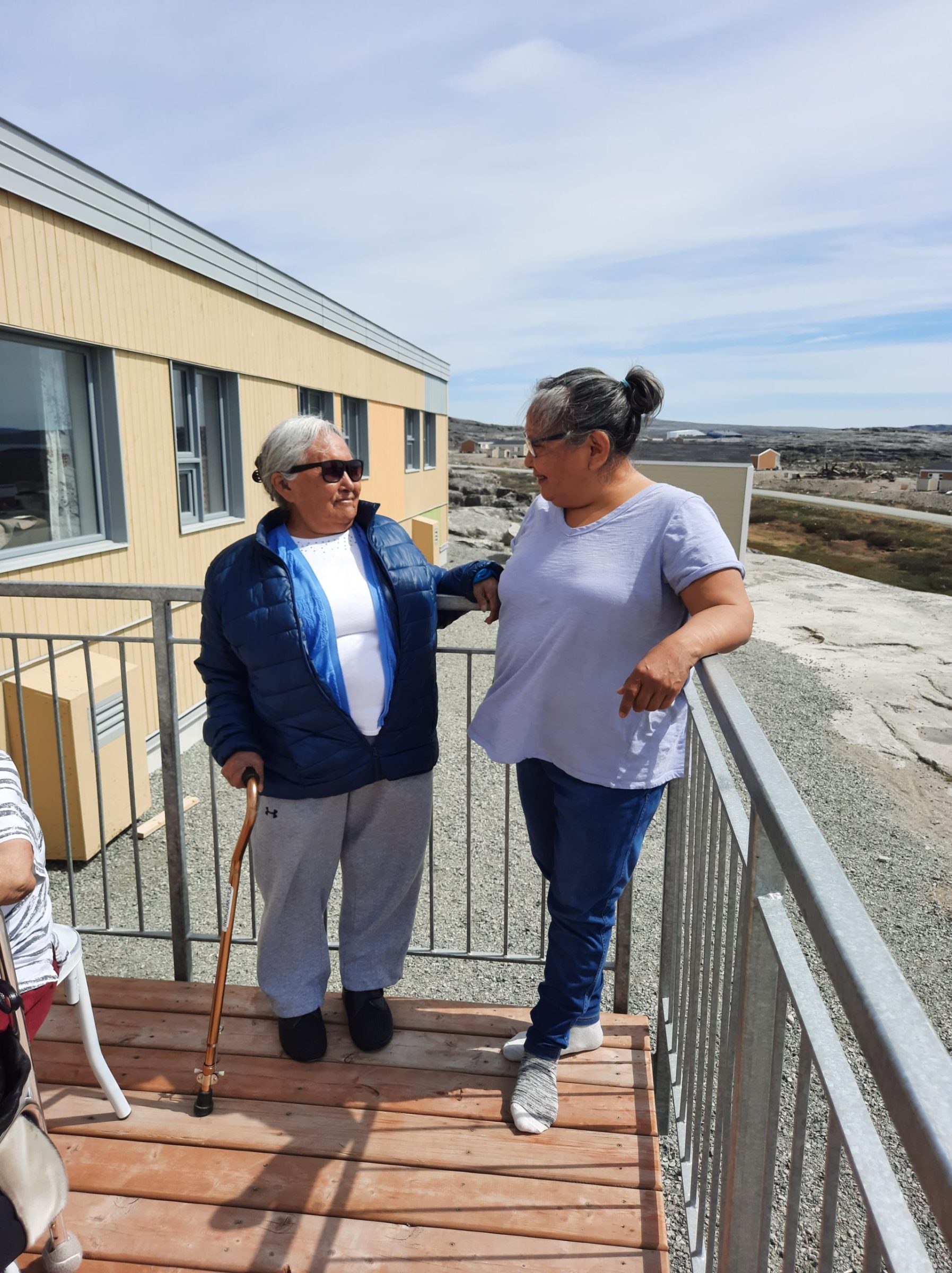 Nellie Kumarluk, left, and daughter Tauni Sheldon are pictured at the elders home in Inukjuak. (Photo courtesy of Tauni Sheldon)

Tauni Sheldon taken from North as a Sixties Scoop child, hopes to accompany mom for medical treatment in Montreal

An Inuk woman who now lives in Ontario hopes to receive travel benefits to be a medical escort for her mother, even though Quebec officials initially turned her down last week.

Tauni Sheldon is a James Bay Northern Quebec Agreement beneficiary currently living in Guelph, Ont. She didn’t choose to leave the North when she was younger — on the day she was born in Thunder Bay, Ont., where her mother Nellie Kumarluk was forced to go to give birth, Sheldon was taken from her as part of the Sixties Scoop and raised by a family in Ontario.

Despite that, Sheldon and her mother have been close for a long time so when Kumarluk, 78, recently needed to seek cancer treatment in Montreal, Sheldon was asked by the health centre in Inukjuak, where her mother lives, to be her medical escort.

As a Nunavik beneficiary, Sheldon requested travel assistance through the Nunavik Regional Board of Health and Social Services and the Quebec government. The request was denied, Sheldon said, because she lives outside Quebec, and she has had to pay the travel costs out of pocket.

“I was just seeking the travel assistance to get to Montreal to be there, and I was denied that,” she said in an interview on Thursday last week.

“Because we live in Ontario — we’re not in Nunavik and not in Quebec — I was told that if I was even in southern Quebec, I’m at least in Quebec, then I would have the right to assistance.”

On Monday, Sheldon told Nunatsiaq News in a Facebook message she learned she might be reimbursed for her travel costs after all, but approval is pending.

Nunatsiaq News emailed the Nunavik health board with questions regarding the way it assigns and compensates escorts, as well as questions about Sheldon’s situation.

In response, spokesperson Kathleen Poulin referred to the health board’s Regional User Transportation Policy in the Nunavik Region — a 22-page document that defines escorts and outlines how patients and escorts receive financial compensation for housing, transportation and food.

Based on those guidelines, Poulin said, the health board is looking into Sheldon’s situation.

“The health centre liaison staff continue to assist the person while she escorts her family member,” Poulin wrote in an email. “The reimbursement request will be reviewed, and addressed within the limits of the Regional User Transportation Policy in the Nunavik Region.”

Sheldon hoped to leave Monday for Montreal to be with her mother as she seeks the care she needs.

While she’s hopeful she’ll get reimbursed for her flight to Montreal, where she has accommodations at Ullivik lodging facility, Sheldon said it shouldn’t be so difficult for Inuit in the south to receive the support she feels they are entitled to.

To Sheldon, all Inuit regardless of where they live deserve to be treated equally and not be forgotten by various levels of government.

“We’re Inuit no matter where we are, and because I’m not in Nunavik or Quebec I feel like I’m being punished,” Sheldon said.

“I spent half my life not wanting to be Inuk, and then I finally sought out who I am and where my family is from. It’s a slap in the face to be excluded; it’s not my fault I ended up in Ontario, and it’s not anybody’s fault where they end up.”

Note: This story was updated to note Tauni Sheldon’s place of birth