“We have not made any decision to pull out,” Percy Kabloona says 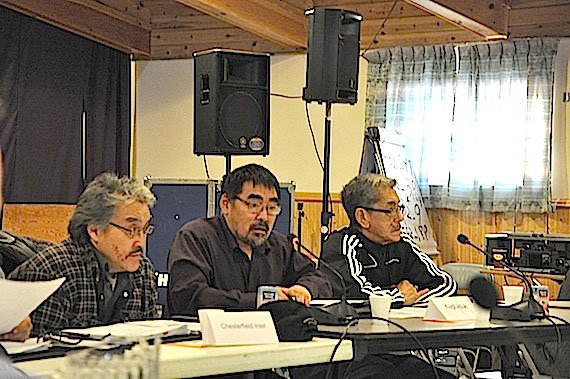 Whale Cove Mayor Percy Kabloona, centre, seen here pre-pandemic, resigned from his position as second vice-president of the Nunavut Association of Municipalities Dec. 9. He later clarified on Dec. 14 that he was misunderstood at the association’s annual general meeting and does not want to pull his community from the association, which represents the interests of 25 communities across Nunavut. (File photo)

The mayor of Whale Cove says he does not plan to pull his hamlet out of the Nunavut Association of Municipalities and was misunderstood in the association’s annual general meeting last week.

In an interview on Monday, Dec. 14, Percy Kabloona said he meant he was not benefiting from being on the NAM executive committee, not that he didn’t see the benefit of Whale Cove being part of NAM.

Kabloona said he did intend to resign from his position as second vice-president of NAM.

“It’s not that we’re pulling out, it’s just myself resigning from the executive.”

“I will have a talk with executive director Tony Bird and NAM president Kenny Bell to discuss this further on,” he said.