‘The Other Ones’ is debut novel for author Jamesie Fournier 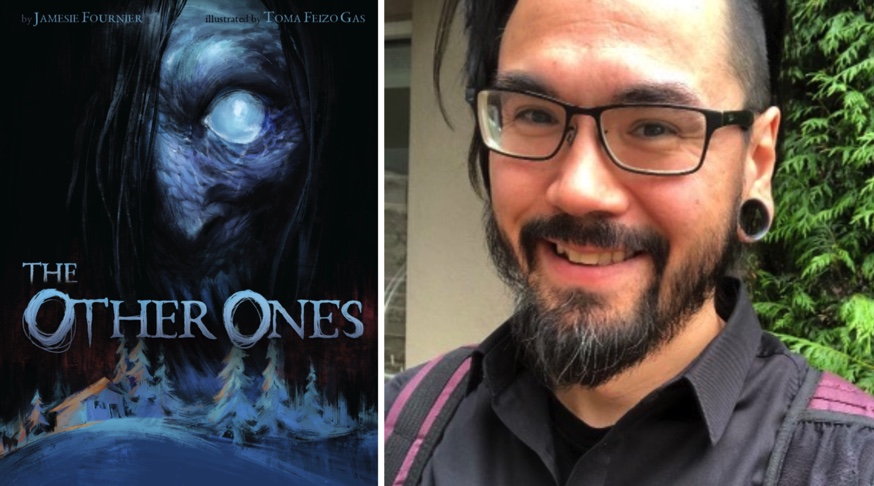 Author Jamesie Fournier’s debut horror novel, “The Other Ones,” draws inspiration from the monstrous, shapeshifting creatures that are commonly found in Inuit stories. (Images courtesy of Inhabit Media/Jamesie Fournier)

For author Jamesie Fournier, Inuit stories have always been a great pathway into the horror genre.

“It can be very dark,” he said. “There is a lot of macabre to go along with it.”

The dark elements of Inuit fairytales are on full display in The Other Ones, Fournier’s debut horror-tinged novel.

Two stories make up the book. The Net tells the story of a girl and her mother who find their fishing net ripped apart at their secluded cabin, and later encounter monstrous forces beneath the frozen lake.

In Before Dawn, a young boy and his friend venture far out onto the tundra and away from the safety of home, until the friend begins to change into a horrifying creature.

When Fournier is not writing stories to keep his readers awake at night, he studies Inuktitut in Iqaluit and works as a support assistant and educator in Fort Smith, NT.

His inspiration for the book came after he attended a cultural camp out on the land at Aurora College in Fort Smith.

He and his class were checking fishing traps underneath the ice using a special chisel tied to a rope that the instructor had made, he said.

When it was Fournier’s turn to use the chisel to chip away carefully at the ice, the ice broke and the rope came loose from his wrist, sinking to the bottom of the lake.

Fournier thought then, “if only there was someone on the other side of the ice,” he said, who could help retrieve the tools.

As he kept thinking about the sunken chisel, Fournier began to think of the Inuit stories he grew up hearing, where mysterious creatures did in fact exist under the ice.

“I kind of grew up with my mom telling us spooky stories in order to keep us in bed,” he said.

The characters from those stories would then linger in his mind.

“I realized I could take these characters that I grew up with and cast them in a new setting and see how they would react,” he said.

“How would they feel being kind of thrust into this modern setting, these beings that have followed their own kind of code for a millenia? What would that look like in this day and age?”

Inuit storytelling is already a great pathway into horror, Fournier said. Many of the stories are really like cautionary tales — they scare children in order to keep them safe.

The two stories in the book share a similar theme, the threat of children being snatched away by dark forces.

Fournier drew inspiration from the shapeshifting creature Ijiraq and the water-dwelling Qallupilluit, which are said to kidnap children who misbehave.

“If you wander away too far, a lot can find you and take you away,” Fournier said.

“Make sure you stay close. Stay close to where people can see.”

Fournier has written short stories for magazines, like an earlier version of Before Dawn, published in Inuit Art Quarterly, but The Other Ones is his first full-length book.

A public book launch is planned for Nov. 15 at 6 p.m. at the Nunatta Sunakkutaangit Museum in Iqaluit.

The Other Ones is available online through booksellers and Inhabit Media.