More Baffin Island caribou will be harvested this year, but how many more is in debate

Nunavut Wildlife Management Board to vote on 2 proposals 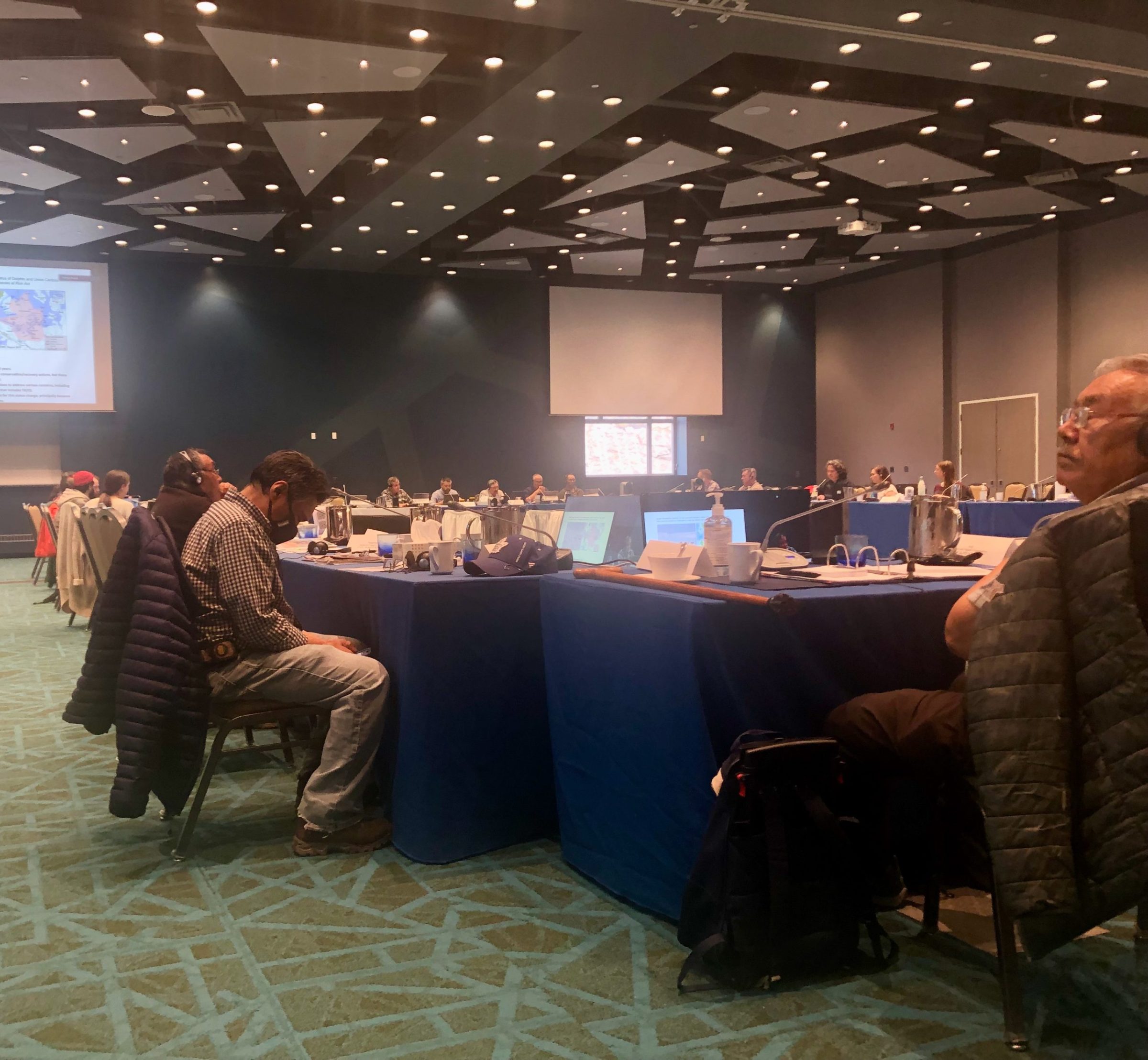 Members of the Nunavut Wildlife Management Board gather with several representatives to discuss proposals on a new 10-year plan to manage Baffin Island caribou. (Photo by David Lochead)

A board that represents hunters and trappers in Nunavut’s Baffin region would like to substantially increase how many Baffin Island caribou are allowed to be harvested over the next 10 years.

The Qikiqtaaluk Wildlife Board met with elders and representatives from Nunavut Tunngavik Inc., the Nunavut Wildlife Management Board and different levels of government at the Aqsarniit Hotel in Iqaluit on Wednesday and Thursday to discuss how big that increase should be.

“Any wildlife species in Nunavut are important for the people of Nunavut,” said Nunavut Wildlife Management Board chairperson Dan Shewchuk in an interview with Nunatsiaq News.

His board will consider two proposals put forth by the Nunavut government and Qikiqtaaluk Wildlife Board as hunters in the region prepare for this year’s hunt, which starts July 1.

The caribou population on Baffin Island has been a topic of concern over the past decade. Nunavut’s Department of Environment conducted an aerial survey in 2012 that concluded the herd had shrunk by an estimated 95 per cent since the 1990s.

The current allowable harvest is 250 Baffin Island caribou per year. Hunters reached that quota for the 2021-22 season on May 22.

The Qikiqtaaluk Wildlife Board, which is comprised of a chairman from each hunters and trappers organization in the region, is proposing that number increase by 100 in the upcoming year, 75 next year, and then 50 every year after that until the 2031-32 hunting season.

The Government of Nunavut is proposing a more modest increase of 50 caribou each year, for the next 10 years.

The changes would come into effect for this year’s hunting season.

The territorial government’s number comes from surveying it did of the caribou population in the region between 2015 and the spring of 2022. The surveys show a “potential” increase in caribou, particularly in the southern part of Baffin Island, according to its proposal.

The GN also said in its proposal document it consulted the regional hunters and trappers organizations, and those meetings were held virtually, in mid-February.

The Qikiqtaaluk Wildlife Board stated in its proposal that caribou populations rise and fall in cycles that are connected with the availability of their main source of food, lichen.

There is not enough lichen in the Baffin region, states the board, so more caribou need to be harvested, since the number of caribou on the island grows at a faster pace than lichen does.

The Qikiqtaaluk Wildlife Board said its position is drawn from traditional Inuit knowledge, or Inuit Qaujimajatuqangit, along with consultation with local hunters and trappers organizations.

Once both proposals were read, a considerable portion of the question and commenting period came from members of HTOs and elders on the use of applying traditional knowledge, or Inuit Qaujimajatuqangit, to caribou harvesting.

“It’s very challenging, how to implement Inuit Qaujimajatuqangit into a management system,” said Ben Kovic, a board member of Iqaluit’s Amarok HTO and former chairperson of the Nunavut Wildlife Management Board

Others expressed the desire for the GN to do in-person consultation, instead of virtual meetings.

Now that the proposals have been heard, the Nunavut Wildlife Management Board will vote on a new management plan for the Baffin Island herd.

Once that decision is made, it will be forwarded to Environment Minister David Akeeagok to approve, change or reject.